A Smith Mountain Lake Home Gets an Elevation in Height & Style

If Scott Elliott has learned anything over his many years of building and renovating properties as the owner of Custom Structures in Lynchburg, it’s to move fast when the right thing pops up. So that is exactly what he and his wife, Meredith, did in July 2021 when a house on Smith Mountain Lake, right by Hales Ford Bridge, came up for sale.

“I called her and said, ‘Get to the lake now!’” Scott recalled. “She hauled tail to the house and I hadn’t even seen it. I was on a plane when she made the offer.”

The home had been a rental for many years and was dingy and outdated, but the empty shell didn’t scare the Elliotts. In fact, they are well accustomed to transforming properties from abysmal “Befores” into gorgeous “Afters.” Here are some highlights of what they did to overhaul their personal lakehouse-turned-Lynchburg Living Smith Mountain Lake Idea House in a matter of just seven months. 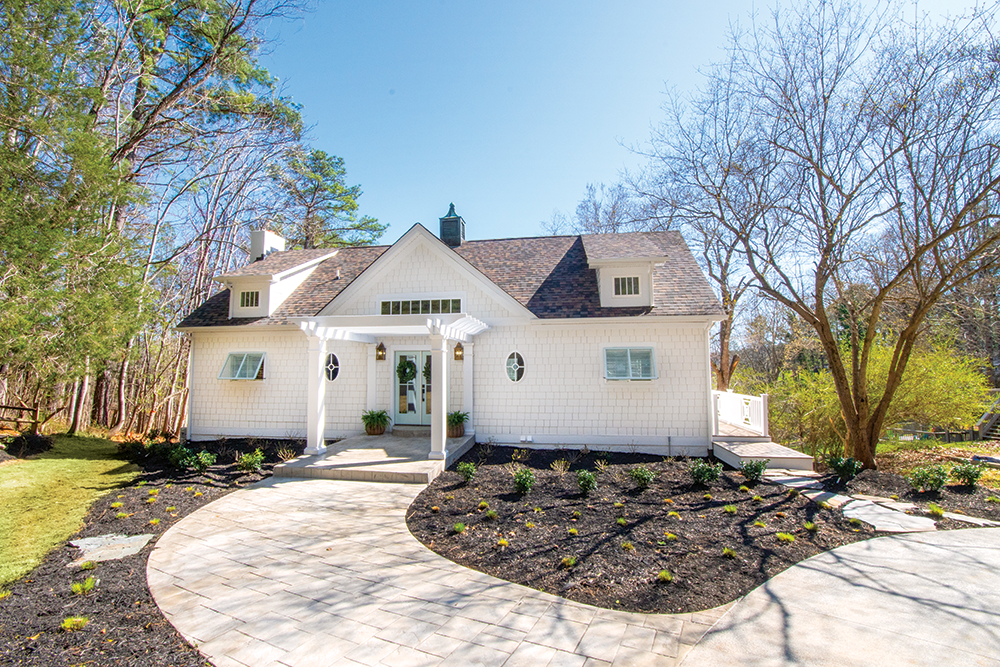 COASTAL CHIC MEETS LAKE LUXE
Not every lake dreams of being an ocean, and thankfully the Elliotts’ SML house didn’t have to choose stylistically either. Exterior additions to the home include cedar shake siding, a copper cupola up top, and hurricane shutters, all of which give the entrance a coastal vibe. Two decks on the back flank the home, while a flat seating area with a fire pit and Adirondack chairs awaits conversations overlooking the lake. Down the stamped concrete walkway to the dock is a shed that the Elliotts repurposed into a “Bar Barn,” adding cabinetry, a mini fridge, and a margarita machine so visitors can grab a drink on their way to the water. 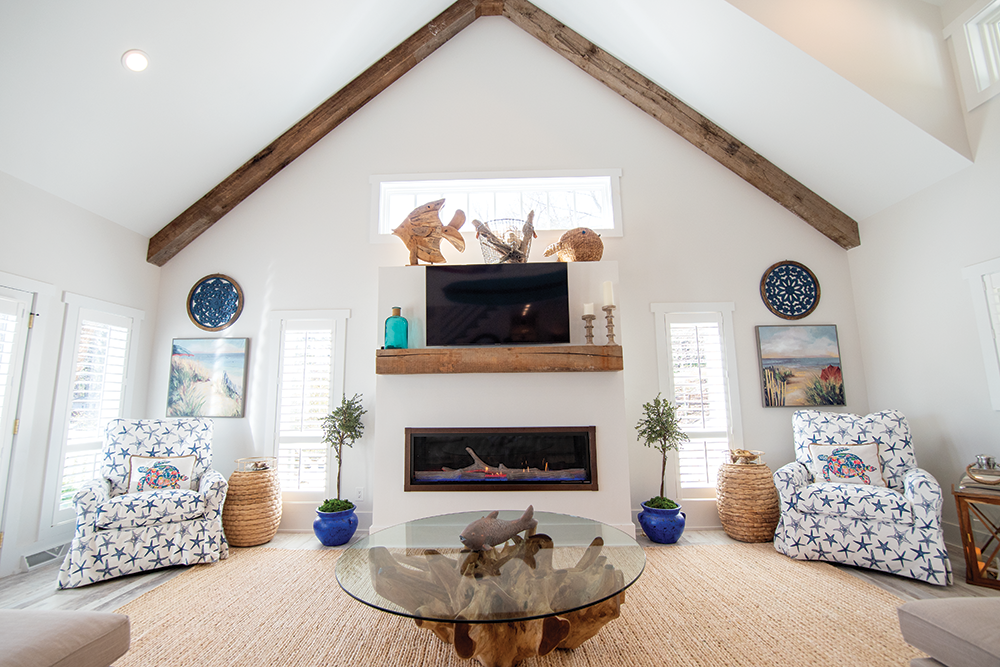 POP THE TOP
With four kids plus an exchange student under one roof, along with Meredith’s desire to host large gatherings and rent the home out to others, the first major change the couple decided to make was raising the roofline. By building up instead of out, the Elliotts were able to stay within the home’s original footprint while adding soaring ceilings with wooden beams in the great room and kitchen, as well as a loft above that holds a Queen bed, two children’s cots, and a full bathroom. As they went up, the Elliotts also added new windows and transoms to bring in abundant light and clearer views of the lake. Their thoughtful renovations helped transform the home’s total hosting space into five bedrooms (including a children’s room with six bunk beds), four bathrooms, and a full basement. 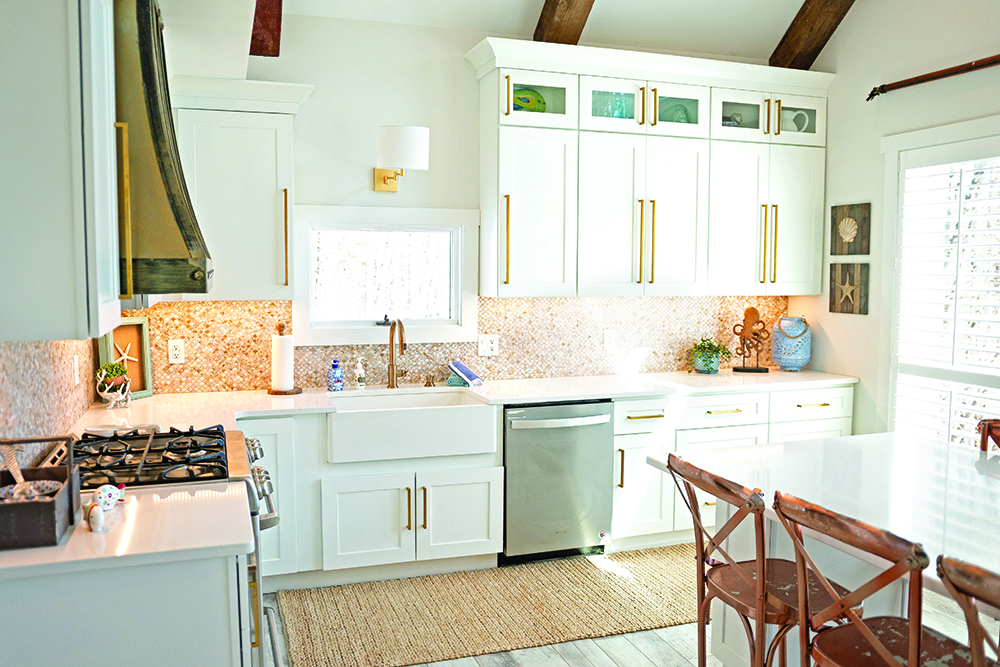 A KITCHEN WITH SHIMMER
Lake kitchens lend themselves to a certain vibe, often with dark wooden cabinets and walls and green or red tones. While this look conjures up joyous summer memories for some, Meredith wanted a fresher look for her new kitchen. She accomplished this vision with white cabinets and quartz countertops, married together with gold hardware and a shimmery fin-shaped tile backsplash that nods to her surroundings. 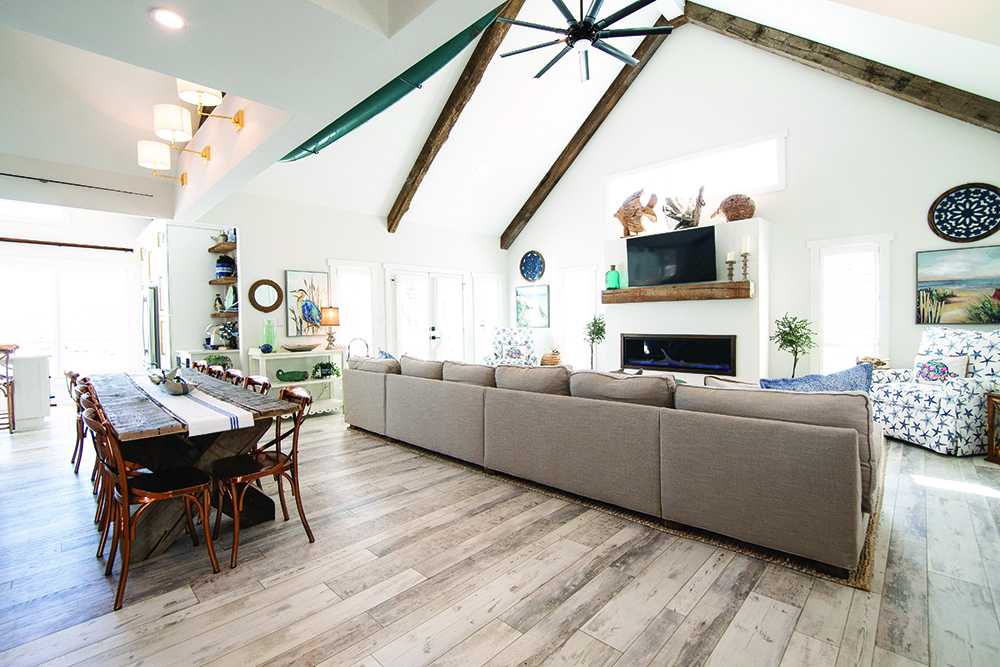 A PLACE TO GATHER
Another priority for Meredith was to integrate a large dining table without making a formal space for one, so she cleverly inserted it at the intersection of the kitchen and the great room.

“I had to have somewhere to seat a lot of people,” she said. “I want this place to be for families, big families—grandparents, grandkids, aunts, uncles—so everyone can cook together and be together.” 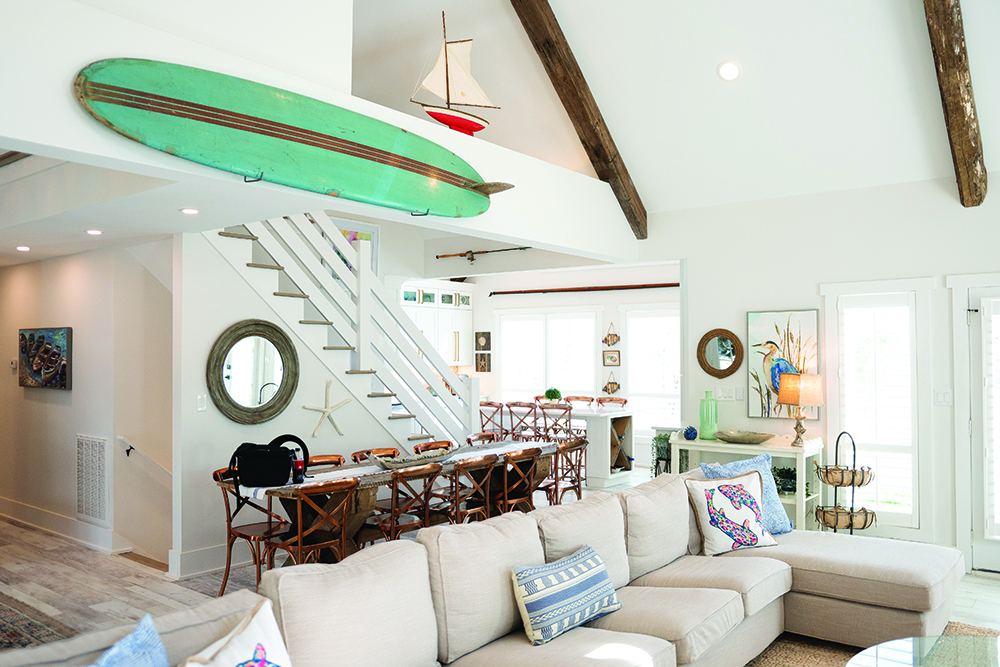 UNEXPECTED ART
“Before it got cold, we took the jet skis around the corner to a little cove and literally just grabbed so much driftwood and let it dry,” Scott said. “Then we cut it and put hooks in there and attached it [to the foyer chandelier]. We hit the jackpot on that.”

This unique focal point of the home’s entry is just one of the surprising ways that Scott and Meredith wove artful touches throughout the home. They also repurposed larger works of art and even an old privacy screen to use as headboards. Then there’s the 1960 surfboard hanging above the couch in the great room—a $100 Facebook Marketplace find, though it took a little negotiating on Meredith’s part.

“I messaged [the owner] and he said, ‘I have 30 people lined up and I just want someone to cherish it,’” she recalled. “I said, ‘I can promise that I will cherish this. I know exactly where it’s going and you can come see it if you want.’ 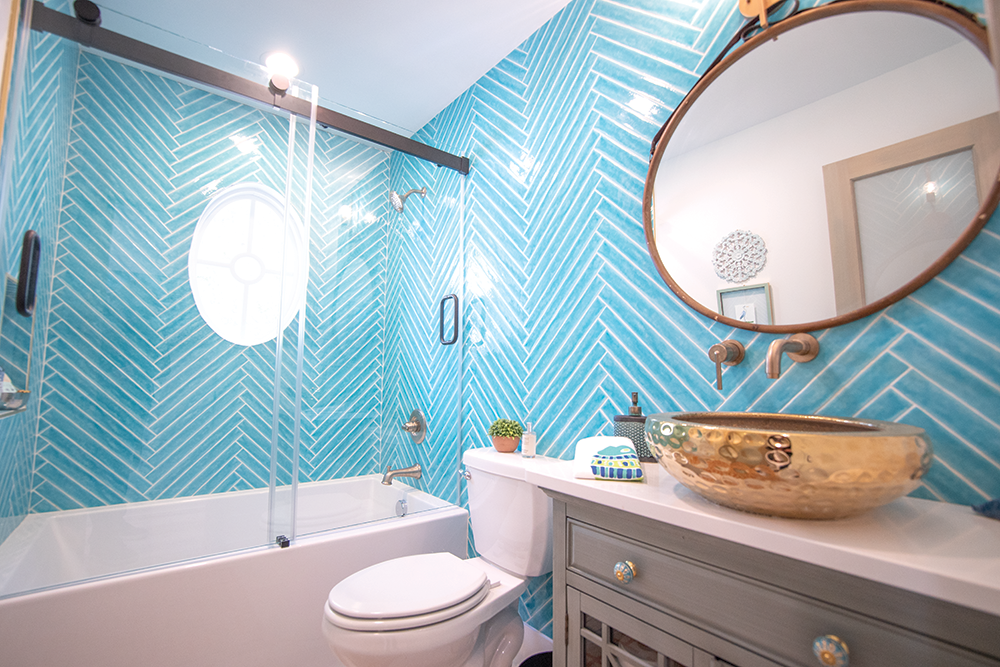 TILE WITH STYLE
Additional impressive features can be found in the bathrooms, where Meredith made good use of unexpected colors and patterns, retrofitted vanities from Green Front Furniture, and glimmering bowl sinks from Ferguson. Tile selections range from a skinny teal tile laid in a herringbone pattern in the hall bathroom to a blue dot tile in the master bath to a textured white tile running from the walls through the shower in the loft bathroom. 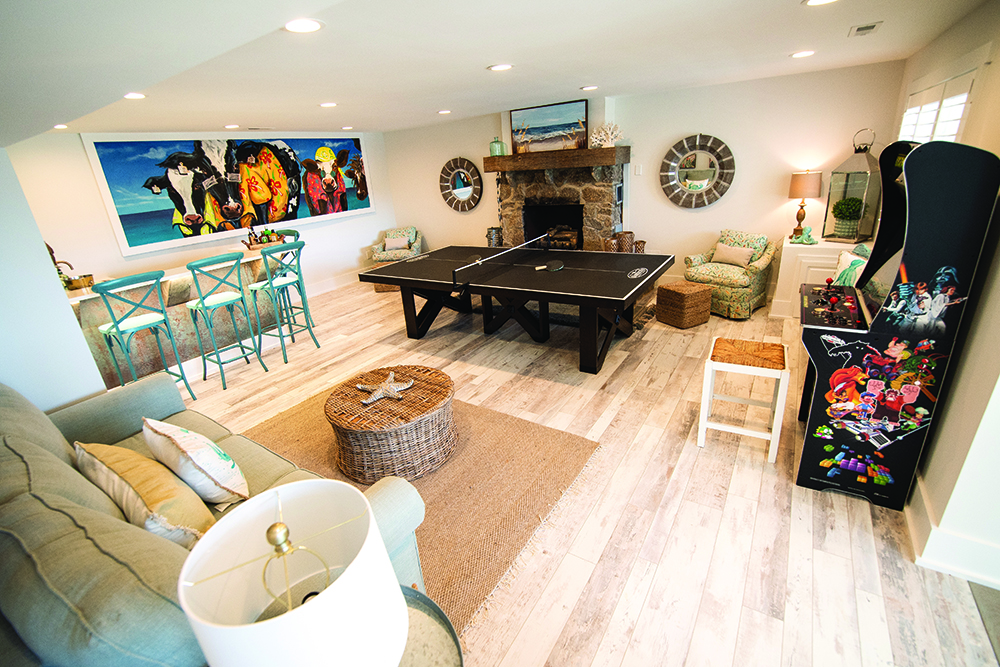 HAVE A COW, AND A DRINK
Although the home’s basement was “dungeon-like” when they bought it, Meredith saw that it held possibilities. She took advantage of an existing bar, retrofitting it with a bronze sink, mint tile backsplash, and a sheet of patinated copper under a new quartz countertop. Above the bar hangs a large cow mural with a memorable back story.

“That came out of Big Lick [Tropical Grill] on Timberlake Road,” Meredith recalled. “They were going to throw it away and Scott was like, ‘Nooooo!’ So we have had that since 2010, and it has gone from our barn to the first lake house to here. It’s just fun.”

The colorful cattle oversee the rest of the entertainment space, complete with a ping pong table, TV area, and large windows that beckon guests outside.

For the Elliotts, the home has been both a labor of love and a sprint, and Meredith eagerly awaits the moment when she can finally sit down and soak in the finished product.

“I can’t wait until I can turn on that gas fire pit when it gets dark, open a bottle of wine, and just sit here and not be bothered and listen to the boats,” she said.