The Academy Center of the Arts Continues to Hone their Mission

In its nearly 120-year history, the Academy Center of the Arts has seen highs and lows.

It was once a prominent, glamorous theater that brought in traveling shows, musicals, and performers.

At its lowest point, it was shuttered for six decades before restoration groups fought and fundraised for years to finally renovate the historic landmark back to its former glory.

Dr. Bill Kershner, volunteer archivist at the Academy, said there have been several stages in the life of the theater lasting longer than a century.

The Academy opened in February of 1905 and had first and second class touring companies who would come to the Academy after their Broadway shows. 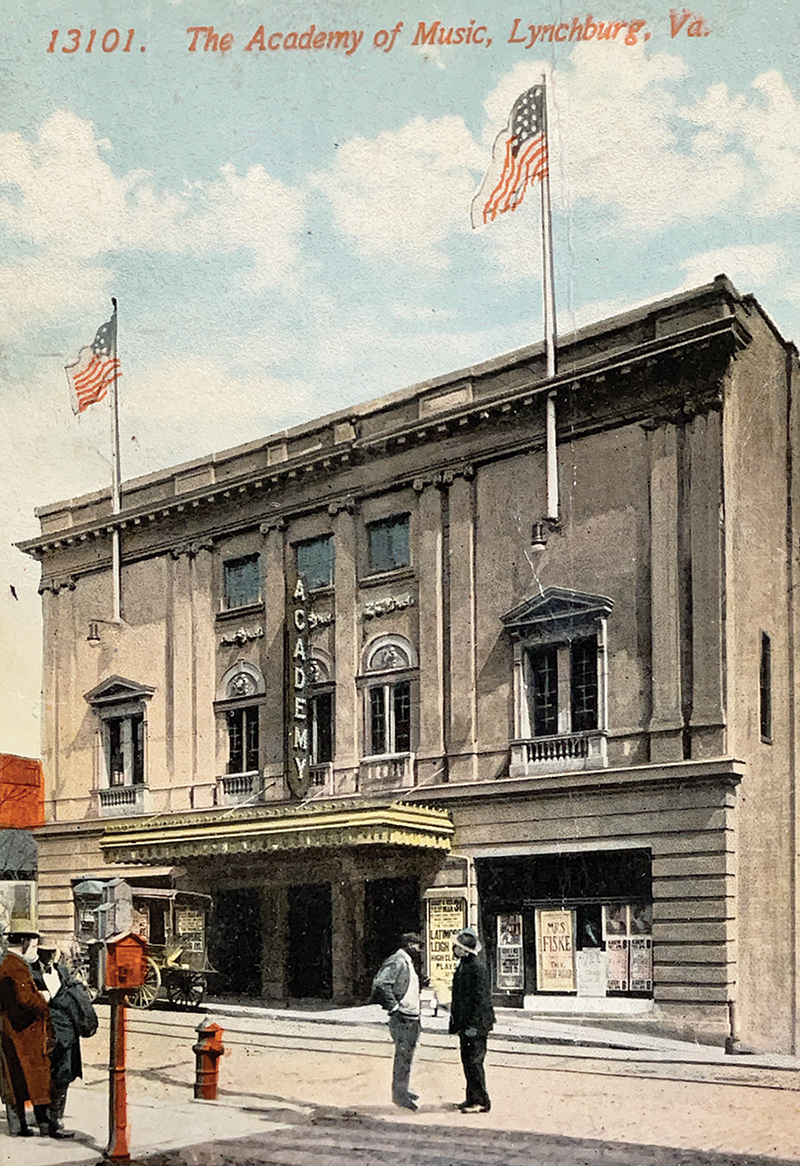 “Lynchburg was an important stop because these touring companies didn’t want to travel without making any money every day. They didn’t want to play for, say, a week in Washington D.C. and then a week in Atlanta, and then lose a couple of days traveling. So they would book these things together,” Kershner said. “So Lynchburg was on that circuit. We had the same shows that everybody read about during this period.”

The Academy also offered cheaper events that were popular with different groups in the community.

“So the Academy always served several different parts of the community,” Kershner said. “It wasn’t just the wealthy folks.”

Aside from the touring companies, the Academy also held concerts and recitals, some of them by internationally famous acts. They even tried wrestling in 1914, and Kershner says he is still wrapping his head around how that was pulled off.

Parts of the Academy burned down on April 20, 1911, and the interior was destroyed. No one knows what caused the fire, but the best guess was it was caused by the furnace, Kershner said.

It was rebuilt and reopened in December of 1912 and the interior was even grander than the original—and it was that version that became the prototype for the restorations in 2015. The next period of the Academy brought in silent films, though the building wasn’t fitted for that type of venue until a third stage was built in 1928 for talking movies.

“For about two years, it does first run films and the Academy is once again on the forefront of entertainment in Lynchburg—but that only lasts a few years, because in 1930 the Paramount, designed as a movie theater, opens across the street, and after that they’re really a second-run theater,” he said.

Most people who remember the Academy from this time will remember viewing the serial films shown on Saturdays.

The theater showed some movies that were about a year or two old, ran serials, and held the occasional vaudeville show until it ultimately closed in 1958 and remained shut for 60 years until it reopened in 2018.

For the first 10 years of its closure, it fell into disrepair until the announcement that the 5th Street bridge would be built right through it in the late 1960s

A group of citizens rallied to secure a historical landmark status in 1969 and got the bridge rerouted, Kershner said, and although that group had hoped to restore it, raising money was difficult, so it continued to sit for another 15 years until the early 1980s when it was bought by Liberty University who had the idea to restore it.

That never happened though.

In the 1990s it was sold to the Friends of the Academy for the low price of about $10, Kershner said, and in 1996 it merged with the Fine Arts Center.

“That’s when the Fine Arts Center was torn down and they raised the money for the Warehouse Theater and the building next door, which became the art galleries,” he said.

It wasn’t for another 20 years when other spaces were being renewed downtown that people saw possibilities for the Academy to be a part of that renovation work. “People saw that downtown was coming back to life,” Kershner said. 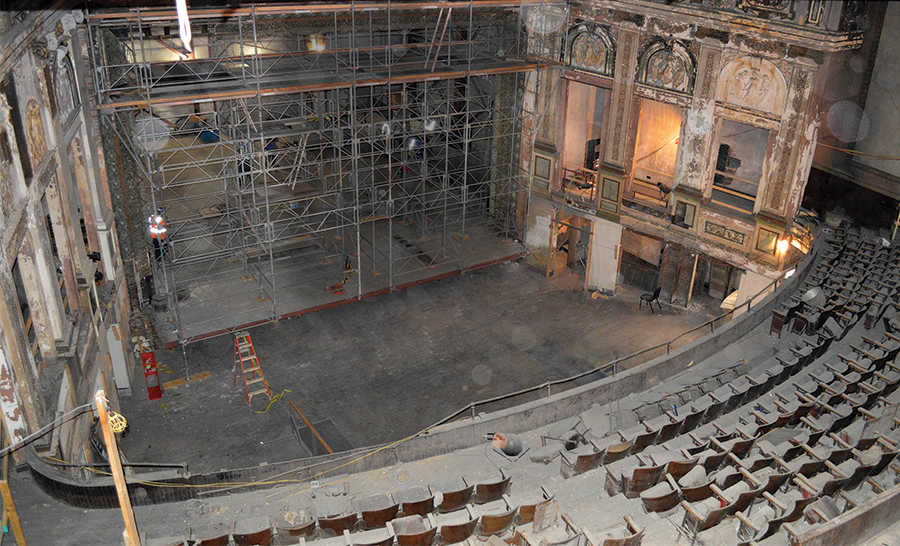 In 2015 they began seriously raising money and were successful, which was around the time that CEO Geoff Kershner—Bill Kershner’s son—took over.

“So that was pretty gratifying to us that it was while Geoff was executive director that it actually happened,” he said.

By December 2018, the historic theater was back open after a $30 million restoration project.

Nearly 50 years after community members were able to begin fundraising efforts for the Academy and save it from demolition, the beloved historic space was able to live on with the same mission it’s had all along of serving citizens from all backgrounds.

That inclusivity is an important piece of Chief Programming Officer Michelline Hall’s job, who said the mission of the new Academy is to have arts be accessible for all people in the community.

“A part of that is having camps and classes that people can attend and participate in and then another piece is providing financial support for people who can’t afford it,” she said.

New to the Academy that was not a part of its original function is the art galleries and educational classes that the community now has an opportunity to be a part of.

It recently has begun offering Academy in Motion, a mobile arts program that seeks to impact members of the Lynchburg community by providing arts access to groups and individuals with barriers that would otherwise prevent exposure to the arts on their physical campus.

Hall said the bus goes to the YMCA, adult day care centers, and schools to bring programming straight to participants.

She said it also has a partnership with the Virginia Cooperative Extension on an initiative called Plates and Paints, which is a food and nutrition program. The program works with people digitally to make a healthy plate of food in a way that is diverse in color just like a paint palette would be.

The Academy is also open for school field trips and offers students to take a class, see a performance or the art galleries, or learn the history of the building. 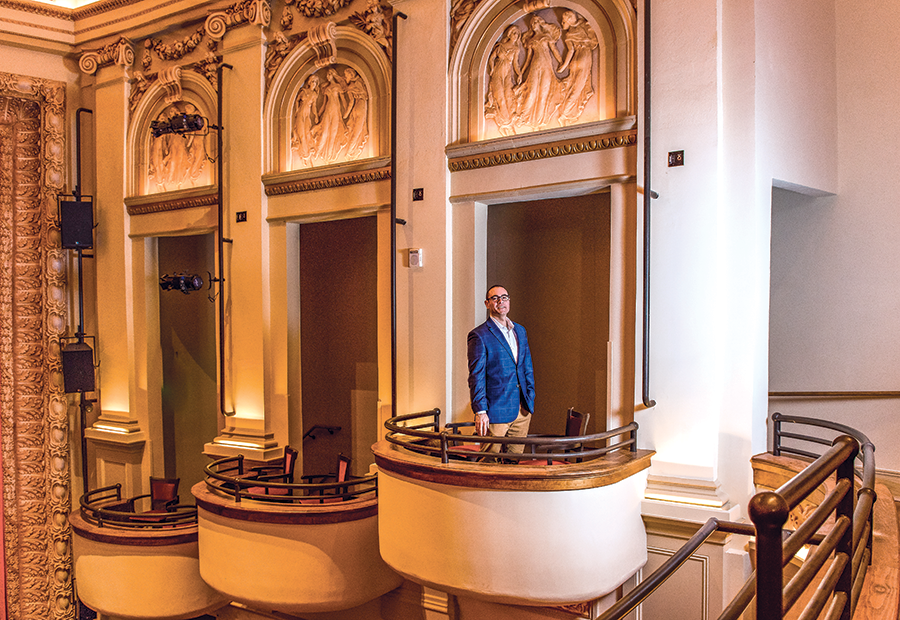 “That’s the programmatic aspect of being intentional about how often we’re creating those moments where we’re able to tie in that educational and cultural component because a lot of these kids, just by expanding their horizons, you never know what they may decide they can do,” Hall said.

Hall said the Academy is going to invest in the best acts and artists that it can bring in, but wants to make sure that it’s bringing everyone to the table to enjoy it.

“I don’t know how many doors were opened just from people seeing something or experiencing something or hearing someone that inspired them and allowed them to go down a certain path,” Hall said. “I’m not anticipating that kids that come in here to all become amazing visual artists, but maybe they feel like they can do something else in their lives that they thought they wouldn’t be able to do.”

That’s a beautiful thing about the arts. The arts are cross-cultural, Hall said, and reach across all demographics.

“Good music touches everyone,” she said. “It doesn’t have a zip code, it doesn’t have a salary cap or limit. There are certain things about the arts that just unify all of us together.

And we’re trying to constantly be the catalyst for that.”