Area farmers markets emerge from the pandemic stronger than ever before 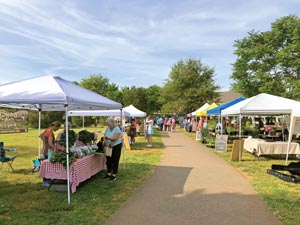 There’s something about a stroll through your local farmers market that turns grocery shopping from a rushed task into a meaningful experience—the simple wooden tables, rows of fresh products, and smiling faces of local makers and producers form a gathering spot that has been a mainstay in our area for generations, serving to not only nourish our bodies but also nurture a sense of community.

Even though farmers markets thrived better during 2020 than other businesses, because of their loyal followers and also being able to serve outdoors, they are just as enthusiastically celebrating the end of pandemic restrictions and are pulling out all the stops—from live music to night festivals. They are also seeing a wider range of customers and larger vendor base than ever before. 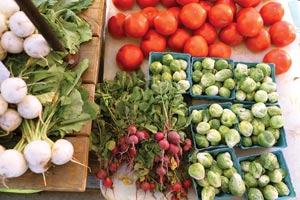 Dorothy McIntyre, market manager at the Forest Farmer’s Market, said she is seeing more vendors using the market as an avenue to showcase their creativities and as a way to introduce themselves into the community.

It’s no longer just a place for people to sell homemade muffins but also French-inspired pastries like macarons. Farmers markets are the incubator for these small businesses. 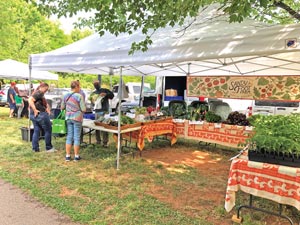 “You have the mom and pops that are coming in that are trying to create and bring something new and valuable to the area, but then you get these people that are relocating and are finding the farmers market and they feel like this is a good atmosphere to try out to see if this is something that would be interesting to the area,” she said.

Each week McIntyre says she sees more young people and a more diverse crowd come to the market to buy groceries and just to hang out at the park behind the Forest Library where the market is located. 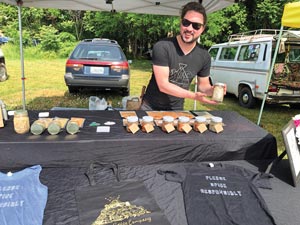 “They’re asking questions about the food and how it’s been grown and where it’s been grown. Things like that are still happening,” she said. “It’s still very active in that people want to know where their food is coming from. I’ve been approached more this season by more African American or Haitian American potential vendors that have phenomenal products and are starting to see the market as not just the white person’s market.”

“There’s been growth of the diversification to where it’s not just meat and produce and eggs, it’s spices, it’s pasta. The diversity of products has grown exponentially from 2011,” she said. 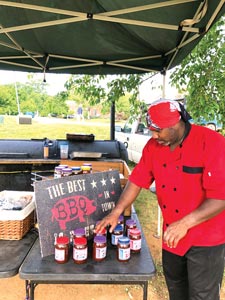 She said there are constantly new people coming in and experiencing local markets, whether it’s Lynchburg, Bedford or Forest, and they’re enjoying the atmosphere, the community and are supporting local businesses.

“They’re more mainstream now and it’s just part of people’s lifestyle now,” McIntyre said. “I know a couple people that their highlight for the week is coming to the market on Saturday because they know that they’ll get to see people, get good food, and they enjoy the people watching that you get to experience at a farmers market.”

The market has added new features on Saturday morning such as live music and offering booths for community programs and nonprofits to set up at.

“More of the community is seeing the market as a way to get their information out to the public,” she said. “There are tables and benches for people to come and the atmosphere is relaxed. People see friends, it’s pet-friendly, they’re getting their breakfast there and hanging out. They seem to want to be out in the public and enjoying the community space that a farmers market provides.” 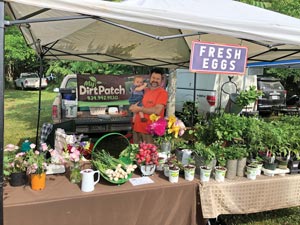 Farmers markets also saw a big win from Virginia’s General Assembly this year when it deemed markets as essential in the event of a crisis, similar to how a grocery store is treated.

“If non-essentials are shut down, farmer’s markets can stay open and have a presence in the community,” McIntyre said.

“I think last year this time [of year]we just moved everything back outside but we had barricades up,” he said. “We’ve still got all of our producers outside spaced out but we don’t have to control the traffic flow anymore.” 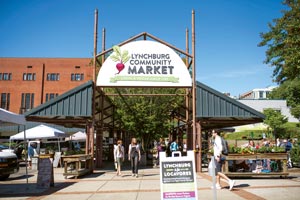 The market also recently just brought music back which is held every Saturday through the end of October.

He said he’s excited to have those typical Saturday mornings back that everyone knows and loves.

For example, Easy Does It Farm, one of the pork producers, will be out under the pavilion on Main Street at 7:30 a.m. cooking up sausages and setting out samples for customers meandering at the market.

“That really just kind of adds to the ambience of some of the market so we’re really excited,” he said. “We’re just really excited to be able to have a somewhat normal market experience and when you go to the Lynchburg Community Market on a Saturday morning, you’re ready to see a crowd about 7:30 once the sun comes up.”

The market is open Tuesday through Saturday but the weekday crowds are mostly lunch-driven and visited by tourists. 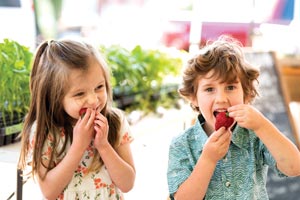 “We’ve got people from all over downtown that come and hang out at Ms. Barbs or they get something from the bakery,” he said. “Being open during the week is great. There’s not a whole lot of public markets around the country that are open five days a week. We were open during an ice storm a few months ago and the bakery had donuts ready to go. I think that just speaks a lot about Lynchburg as a whole.”

The market has started a Tuesday evening market for producers only and a Lynchburg Night Market, which will take place once a month the last Saturday of June, July, August and September and will host breweries, food trucks, vendors and live music. 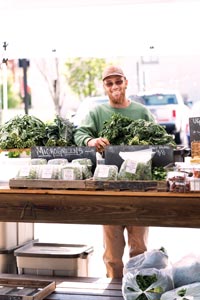 Erika McFadden, market manager for the Bedford Farmers Market, which is held each Friday and second Saturday, said she was pleasantly surprised with the turnout from patrons over the last year during the pandemic.

“Our challenges were having to spread out vendors, and the masks and all that good stuff and do some additions that cost a little bit of money,” McFadden said. “But patron-wise, people in Bedford really showed up and supported the market, even though there was a pandemic in place. So our numbers weren’t hurting, we did a great job last year.”

The Bedford market is open from late April to October and is located at 220 W. Washington St. under a large pavilion.

McFadden said in past years the market sees between 17 to 21 vendors each week but this season she had 45 applications. 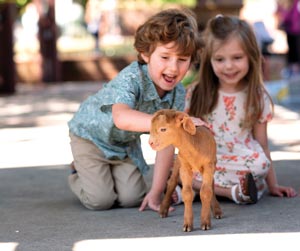 “We’ll have a really good turnout throughout the summer and it’s been nice to see more people want to come out and I think that’s what we’re seeing with the post-COVID vaccines as people are feeling a little bit safer,” she said. “More vendors feel like they can come out to the market so I’ve had a lot of phone calls from local producers and artisans.”

She thinks the people who show up to the market are looking to support local farms and to buy fresh produce. 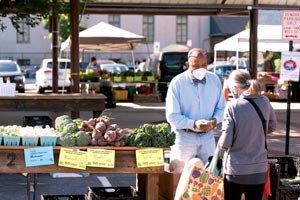 She said what makes Bedford so special is its family-friendly atmosphere where everyone can feel welcome.

“Everybody helps everybody else out,” she said. “We are one big family under the pavilion and people feel that. This is a great place to visit on a Friday or Saturday morning. It’s a nice place to be.”