For a lot of people, their dogs are their children and when they leave for work for the day or have a laundry list of errands to run, they want their fur babies to have the best quality of life while they’re away.

Theresa Bryan was working in corporate sales and had two dogs that she wanted day care for. When she found nothing available in the city, she decided to take matters into her own hands and open her own facility.

She opened the business in March 2019 in The Plaza Shopping Center on Memorial Avenue. She wanted it to be a place where there would be exceptional customer service, care, and straightforward pricing. 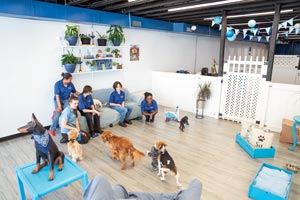 The business provides boarding services, dog day care, nail trims, and WebCam viewing so owners can watch their dogs having fun playing with their furry friends.

Bryan believes there’s no place like home, but should you need to leave your dog overnight, the K-9 Cloud 9 team is trained to pamper your dog so time away from home is as comfortable as possible.

Bryan said she is also working on hiring a groomer in the future.

K-9 Cloud 9 is an indoor center, which Bryan said is great for dogs because it’s safer and cleaner.

“Our format is a little different than most daycares because the dogs do play out most of the day, versus being caged most of the day with short potty breaks,” she said. “That’s what most centers do and our dogs are just out the whole day and they really get the chance to make friends and be very rambunctious and get all their energy out.”

She said it’s ideal for owners who want their dogs to be more social with other dogs and can learn proper manners.

“Dogs have a lot of energy and unless you’re going to take your dog on a 45-minute run every day, you’re never going to exhaust your dog,” she said. “So dogs that have an opportunity to socialize and be in a structure-free environment are generally happier dogs.”

The business also offers early drop off and late pick up for those who are working 12 hour shifts like nurses and doctors, Bryan said.

“Their dogs can have just as much fun and they don’t have to worry about not being able to take their dog anywhere because their shift work doesn’t allow that,” she said.

Jordan Miller, a Lynchburg resident, has been taking his lively lab-mix, Ruby, to K-9’s daycare for four days a week since it opened.
Every morning, he says “You want to go play with friends?” and Ruby’s ears perk up because she knows that she’s about to go play all day with other doggos.

Miller said 5-year-old Ruby has a phenomenal personality and is the best dog he’s ever had, so just like most other owners who have full-time jobs, he wanted to make sure she was in a trusted and safe environment while he’s away from her.

“We wanted a safe, happy, and convenient place that we could take Ruby because you want to make sure they’re going to a very, very nice place,” he said. 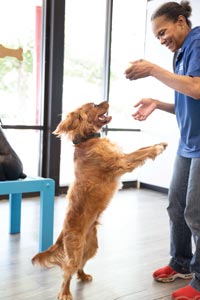 “We wanted a safe, happy, and convenient place that we could take Ruby because you want to make sure they’re going to a very, very nice place,” he said.

As soon as Miller walked into K-9 Cloud 9 in 2019, Bryan offered a tour and informed Miller about the company’s practices.

“She made us feel extremely comfortable with leaving Ruby,” he said. “I trust them completely. They have a great team and when I drop off Ruby I know she’s going to be in a good place and I can just have that completely off my mind while I go to work.”

By Friday, Ruby sleeps all day because she’s gotten all of her energy out between Monday and Thursday, Miller said.

“If dogs don’t use up their energy at doggy daycare, they will use it in a disruptive way,” he said.

Miller has been so pleased with the services at the daycare, he has referred multiple people there because it’s been such an ideal place to drop his fur baby off each week.

“It’s been very integral to my family’s lifestyle,” he said.

Just like daycare for children, K-9 Cloud 9 does activities like nose prints for Mother’s Day and photo magnets for Christmas. In August, the dogs will pose for back-to-school photos. 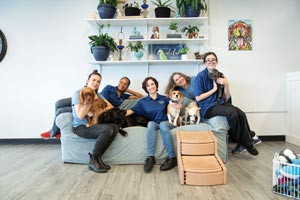 Owning a business has taught Bryan to stay flexible, be willing to make changes, go with the flow, and listen to employees.

“We have such a fabulous team and being the owner of a business is so much easier when I have great employees and I have such a great team working there,” she said. “I’ve been really lucky in the fact that I’ve been able to hire people who have a lot of experience in veterinary and shelter work.”

She said her team loves the dogs like they are their own and she knows she can rely on them to know the best interest and safety of the animals.

“Our team is so dedicated to the dogs coming there, being safe, and having a great time, and I think the owners can really tell that when they pick up their dogs that their dogs love it.”