A New Place to Meat

County Smoak Finds a Home on Timberlake Road Photos by Jenna McKenney You might say that Ken Hess eats, sleeps and breathes barbecue. But lately,

You might say that Ken Hess eats, sleeps and breathes barbecue. But lately, he’s not getting much sleep. “I generally get here at six in the morning. By the time we get home, it’s 10:30, 11 [p.m.],” he says. 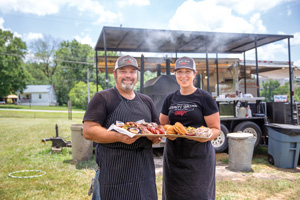 Ken and his wife Jess have poured all they have into County Smoak, which just opened on Timberlake Road in May. They are both trained chefs, graduating from the Culinary Institute of America. Ken was familiar with Lynchburg, competing here in his first barbecue contest in 2002. They ended up moving to the Hill City in 2016, and Ken worked at several restaurants for the Parry Restaurant Group (including Bootleggers and My Dog Duke’s Diner).

Jess worked at Linkhorne Middle School, which is what led them to their barbecue business. After a food truck backed out of a school fundraiser, County Smoak was born. Last year, they started doing more frequent events, including pop-ups at Stadium Inn. “We got a pretty good following. We would have lines sometimes in the morning. Thirty minutes before, people would start lining up,” Ken explains.

The Hesses looked at spaces to anchor and grow County Smoak for a year before opening up on Timberlake Road next to Tiny Town Golf. When the pandemic hit, Ken was laid off, and that sped up their plans. Their family of five drove straight through to St. Louis to buy a trailer with a smoker that Ken calls “the beast.”
Two months later, County Smoak opened its doors.

In some ways, the pandemic was a great time to open. It’s trained people to do takeout and order online, which is the core of the County Smoak business model. There are a few picnic tables outside, but the majority of orders are to go. If you want brisket or mac and cheese, don’t wait too late in the day—they sell out frequently. The pork sandwich is the number one seller, and Ken says the turkey is very popular as well. 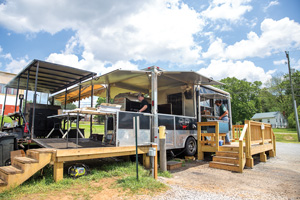 Also, in this polarizing time, the Hesses are glad to see a diverse customer base come together to agree on good barbecue.

“I think we’ve really been able to bring everybody in,” Jess says. “With the right message to people, there is common ground. Everybody can come together and be in a shared space and enjoy the same food and get to know each other.”

A part of the mission of County Smoak is giving back to the community. They started Thankful Thursdays, where they provided free meals to members of the hard-hit service industry. With the help of donations from customers, they were able to expand that to a daily mission. Every night, they take leftover food to people in the Roads to Recovery program, a nonprofit that focuses on those who are recovering from addiction.

“It’s not just about making money. It’s about the community aspect,” Ken says. “Barbecue has always been about community and family.”