Tucked away from the heat of a typical Virginia summer day, and with an ice-cold carafe of water on the table in front of me, I sat with a passionate group of people who are on a mission to elevate Bedford’s art and food scene—all under one roof.

Surrounding our interview group is art—lots and lots (and lots) of art. From large, multi-colored abstracts to traditional pastoral landscapes to shelves displaying the most detail-oriented, whimsical sculptures I’ve ever seen. Almost every empty space in this historic, magnificent room is filled. 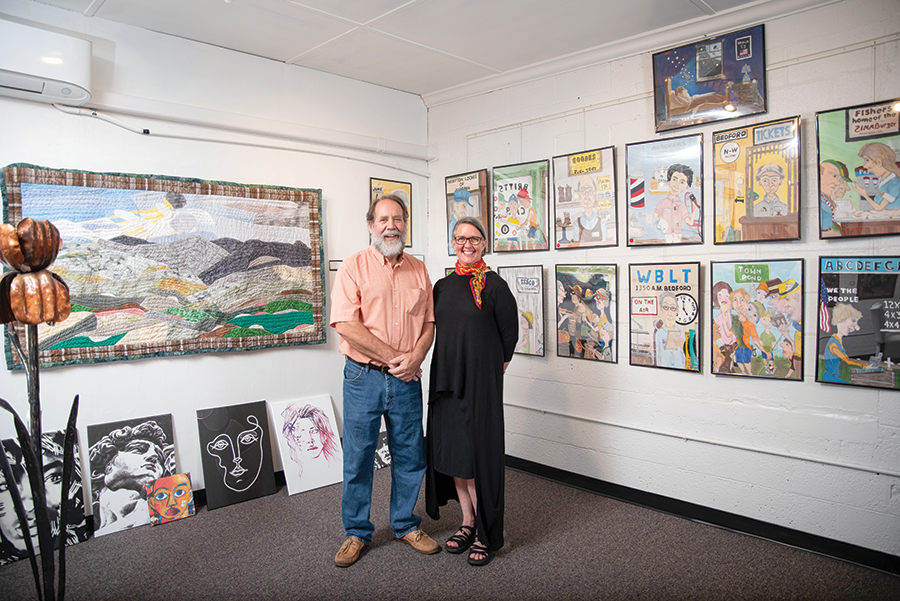 It’s hard not to be inspired here.

“People walk in and say, ‘I feel like I’m in New York City or Downtown Philly.’ They will pick a city and fill it in. And that’s our goal,” said owner Wendy Witt.

The vision for ElectricCo started forming when Witt, a real estate agent, had the Depot Street building listed for sale.

“We just started daydreaming about what this building could be,” she explained, adding that her partner, Bill Mauser, had been looking at vacant commercial spaces to put his blacksmith forge.

Once the couple made the move to buy the space, they had the end goal in mind—a maker’s market, art gallery, and restaurant. Naming the business was easy and was pulled straight from history—the ElectricCo building was constructed in 1895 as the original Bedford Electric Department and it functioned that way until 2000. 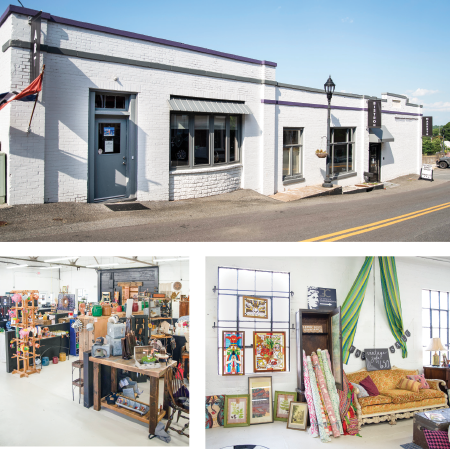 Getting to their end goal, however, didn’t unfold quite like they thought it would and ended up happening in stages.

“We wanted to open up everything all at the same time, but we soon realized that wasn’t going to happen. The market was first and was the easiest,” Witt said.

In June 2021, their makers market opened to the public. It’s located on the lower level of the two-story building, with its own separate entrance, and features a little bit of everything—pottery, candles, jewelry, clothing, and more. Witt says local makers and artisans, who had been working at home during the pandemic, jumped at the chance to have a spot to showcase their goods.

Next came the art gallery, located upstairs. Witt and Mauser didn’t have much experience in this arena and weren’t sure how easy it would be to find artists who wanted to display their work in a new Bedford gallery. They were stunned by the initial feedback.

“It went so much easier than we expected.

As we started talking to artists, they told us, ‘oh my gosh, we are dying for a place to show’ or they were even looking for a second location to show,” she explained. “We got a lot of compliments from artists about how the place looks and feels.”

The front of the gallery is where visitors can peruse—and purchase if they choose—a wide variety of local and regional artwork, and artists swap out their pieces often so there is always something new to see. Keep walking to the rear part of the gallery, and you’ll find a larger, more comprehensive showing from a featured artist that typically stays on display for about six to eight weeks.

With the market and gallery underfoot, the restaurant seemed straightforward—a completion of their business model trifecta. It was going to be a relatively simple eatery, a limited kitchen offering some select sandwiches. But just like an artist who lets their imagination guide them on a canvas, the restaurant idea started taking a different direction when renovations began.

“We didn’t expect the demo of the building to open up the spaces as much as they did. The kitchen went from two small, dark rooms to a big open kitchen. We started knocking out walls, removing sheetrock, found windows that were hidden,” Witt said. “The whole vibe just changed.”

And the more the environment changed, the more their expectations for the restaurant expanded. Witt and Mauser’s limited kitchen concept had morphed into a full-service, fine dining experience. 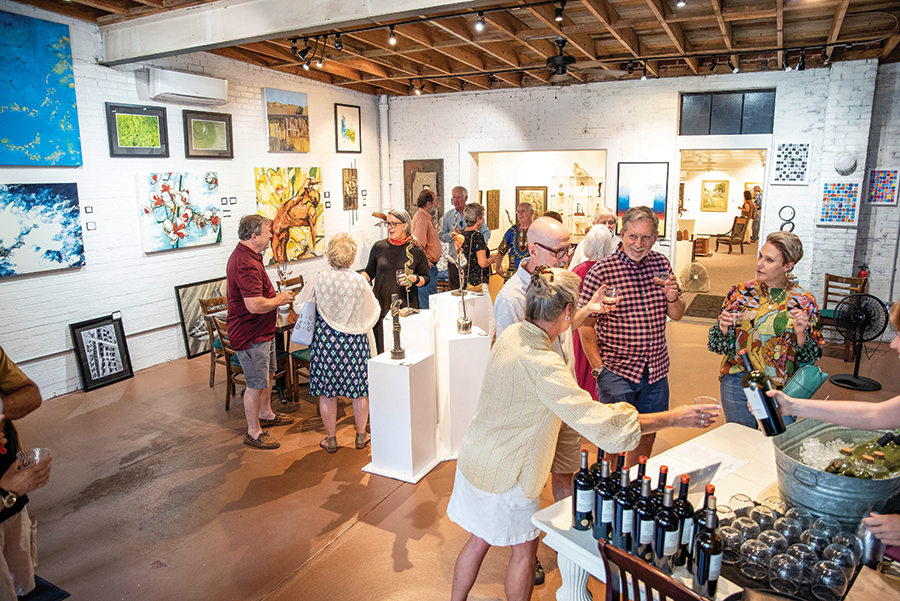 “Then, Chef Thomas and we came together, so it’s like it was all supposed to happen,” Mauser added.

The “cupid” in this serendipitous introduction, according to Witt, was the man who installed the restaurant’s kitchen equipment. One interview later and Chef Thomas Schmidt was hired to lead the way for ElectricCoBistro, which opened to the public in April.

Schmidt, a Blacksburg native who now lives in Lynchburg, graduated with honors from the Culinary Institute of America in New York. His resume includes the Sanderling Inn on the Outer Banks and the Willow Grove Inn in Orange, both of which are highly rated in the culinary world.

“After that, I broadened my foundation into some other things and then the opportunity to come back to fine dining arose with ElectricCo and I jumped on that and couldn’t be happier,” he said.

Creating a forward-thinking, upscale menu in a small town comes with its challenges—one of them being, you don’t want to scare people off.

“So it’s only about this much intimidating,” Mauser joked, holding up his thumb and forefinger.

Schmidt quickly jumped in to add, “You want it to be friendly, somewhat familiar. So people won’t go, ‘what is that?’ Our ingredients are all recognizable and everything is from scratch.”

There’s a lot of fusion-style cuisine. Schmidt has enjoyed pairing many well-known dishes with flavors inspired by Asia, France, or Germany. For example, one of their top selling appetizers is prosciutto risotto balls stuffed with mozzarella and topped with a Southwestern marinara and Mexican cheese. Schmidt’s recipe for ahi tuna with Asian slaw and sushi rice further highlights his love for international flavors.

Their chicken marsala is also a huge hit with customers, along with the bistro’s grilled salmon entrée.

“We have a few things on the menu that are standbys because they are so popular. Ultimately we will probably have a base menu, but we will always be switching things out,” Schmidt said.

The menu is dynamic, just like the art on the walls and Schmidt doesn’t have to work too hard to find inspiration for new dishes—he just looks around. 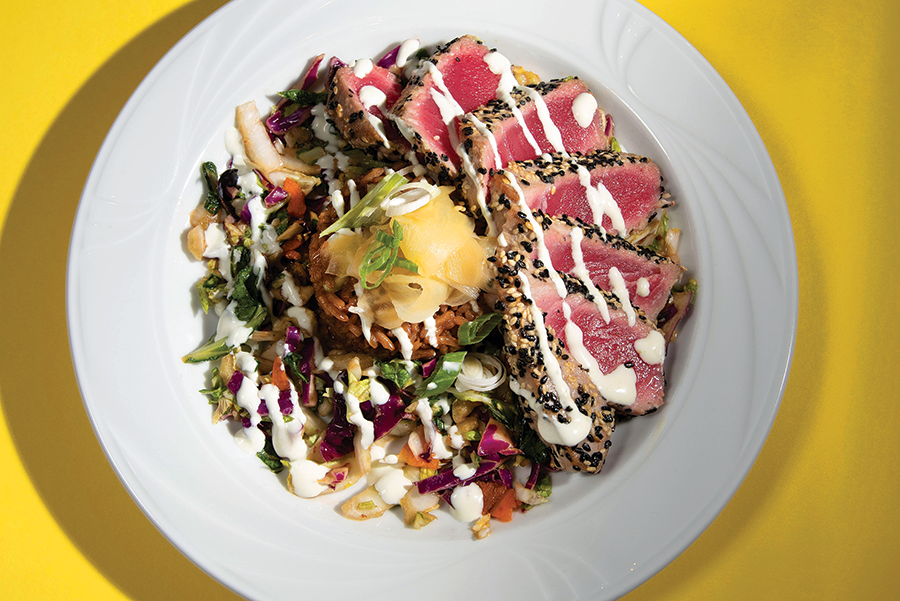 “When the art is always changing, you want the food to change too,” Schmidt said. “You want it to be as special as the art.”

Those two elements, art and food, play delightfully off of each other here at ElectricCo—creating a special experience not only for locals but hopefully lots of out-of-towners as well.

“We want art lovers from New York to Atlanta to come up here to our area, from Roanoke to Lynchburg,” said Witt. “We want to create an art scene in this region and be part of that.”