Take a walk down Pierce Street and you will find some pretty remarkable history. You may also find some gardeners and fresh produce.

The two blocks of Pierce Street hold the homes and stories of many brilliant people. As the smallest of Lynchburg’s seven historic districts, it is recognized more for the people that resided there than its historic architecture.

At its start, an old Civil War hospital was run out of Pierce Street. The district was also the home of Anne Spencer, the renowned Harlem Renaissance Poet; her son Chauncey E. Spencer, a pioneer of the Tuskegee Airmen; and C.W. Seay, the first Black city council member and vice mayor of Lynchburg. There are so many others who left a mark not only on Lynchburg history, but on our nation as well.

Ghislaine Lewis, the director of Pierce Street Gateway and a founding member of the garden, knows that Pierce Street consisted of more than just the famous people. 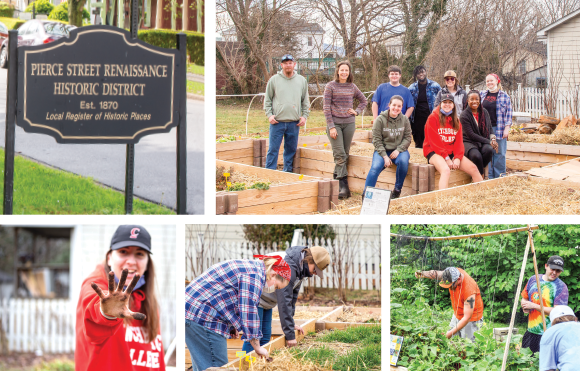 The idea for the garden began to take shape when Lewis spoke with Nina Salmon, a Pierce Street board member, about the gateway’s strategic plan. Salmon said they really wanted a garden.

Starting the garden became part of Lewis’ Lynchburg Leadership project. She was joined by six other members to form Team Big Hearts and, in 2021, the team established the garden behind the Calloway Store, one of the first Black-owned grocery stores in Lynchburg.

Currently, there are no grocery stores near Pierce Street, making it a food desert. This means that people do not have access to fresh, affordable produce—but with the garden they do.

Before anything is planted, neighbors are asked what food they would like to see grown. Once grown, fresh produce is distributed to the neighbors’ houses every Saturday, and they can come into the garden at any time to get what they need.

On Saturday mornings, neighbors and volunteers—those who are charged with the ongoing garden maintenance—can be seen weeding and watering. Whitney Chauta, volunteer and head gardener, says there is a lot that goes into maintaining the garden.

“You have to decide what plants would do well in this setting, how much you should grow, making a schedule of when to start seeds and when you can move plants outside, and how to make the most of the space by doing some companion planting,” Chauta detailed.

According to Chauta, gardening is a very rewarding process, too.

“There’s a feeling of satisfaction when you work with your hands and can see the effects of that growing in front of you. Gardening is a never-ending learning experience.”

Eventually, Chauta would love for one of the neighbors to take over.

“I want it to be a true community garden. I want the people that live nearby to take charge of it and make it their own,” she said.

Both Lewis and Chauta expressed that one of the greatest pleasures of the garden is simply seeing the neighbors enjoy it and take part in it.

“I think the biggest joy is if you pop by on a Tuesday and you see someone getting something from the garden. Or if you come in on a Saturday morning and realize that there’s stuff that’s gone. That means somebody came. Somebody’s come in or a family’s come in and taken food. That’s been really important for us,” Lewis explained.

Chauta told a story of how she was in the garden and saw some strawberries that needed to be eaten before they went bad, so she offered them to a man passing by.

“His face lit up and he told me this story from when he was a little boy and he got into his aunt’s strawberry patch and ate all of them and how she wasn’t too happy about that. That’s the sort of thing I love—the history of a place, and the stories of a neighborhood that continue living on in the people still there. I think it’s a really positive place, in the way that it reminds people of good memories.”

Lewis conveyed that the goal of the garden and the Pierce Street Gateway is for the memories and history of the people of Pierce Street to continue to grow.

To learn more about the Pierce Street Gateway, garden or make a donation visit www.piercest.org.