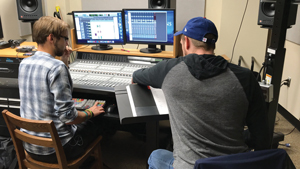 When Chris Nelson took over Liberty University’s radio drama about five years ago, he knew he wanted to take it in a new direction. The drama had previously focused on adapting plays for radio, but Nelson wanted to do something more philosophical. “The main questions I wanted to deal with were ‘What is truth?’ and ‘Is there absolute truth?’” he says. “I gave the writers a prompt with the idea of two mountain peaks: the Peak of Reliance, a place that used truth as a weapon, similar to a legalistic society, and the Peak of Defiance, a place where truth was relative to time and circumstance. That led us to a semester of world building.” This process led to the creation of “The Encounter,” which presents a dystopian world outside our time in which the listener accompanies four characters on their adventures as they encounter truth.

The major theme of the drama is the cyclical nature of man, specifically as it pertains to mankind’s tendency to draw close to the truth, fall away from it, and be brought back to it again by a voice of truth. The characters in the drama wonder if there is any truth beyond the lies of their respective societies.

“The Encounter” will ultimately boast seven seasons, and the team recently finished recording the fifth season. The first two seasons have already been released, and Nelson hopes to premiere the third season before this summer. Nelson, who is an associate professor and the Summer Arts program coordinator at Liberty, operates as the series’ creative manager. Associate Professor Dr. Chris Underation serves as Producer and Associate Professor Kornel Gerstner serves as sound editor. Several Liberty students and other faculty members are also actively involved in the project as voice actors, writers, editors, composers, and various other roles.

“The unique thing about our show is that it is produced within an academic setting,” Nelson remarks. “Most of the voice talent for seasons one and two are college-aged students here at the university, from a variety of disciplines. The show’s music is composed by a School of Music graduate student and I have conceptual art produced by a recent graduate from the Studio and Digital Art program. I am surrounded by an amazing pool of talent here at Liberty.”

Mark McDowell, the series’ composer, has thoroughly enjoyed his experience with the show. “Composing for the series has truly been a unique experience thus far,” he says. “The storyline and main characters, within the context of the mysterious societies, laid the foundation for a diverse compositional palette. It’s been really fun working on each episode and composing music that complements the storyline.” 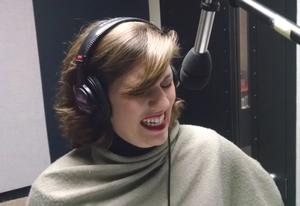 “‘The Encounter’ has brought a new sense of creative fulfillment to my world as an artist,” adds Jamie Cloutier, administrative assistant for Liberty’s Department of Theatre Arts and voice actor for the series. “Voiceover work is a relatively new form of performance art in my career and I have fallen in love with the unique challenges that go along with delivering a vivid storyline through the use of voice acting.”

Liberty students who participate in “The Encounter” can use the opportunity for college credit, but that is clearly not the only reason they are getting involved.

“I started writing fiction in high school, but it’s when I started writing for ‘The Encounter’ in undergrad that I realized how much I loved writing audio dramas too,” says Colton Grellier, Liberty student and lead writer of the series. “The beauty of this medium is that you engage the audience’s imagination as if they were reading a book while also having the assorted toolbox of actors and sound effects that bring the story to life as if on screen.”

“The most rewarding part of working on ‘The Encounter’ is being part of a creative team,” notes Joshua Reed, Liberty student and voice actor for the series. “Even as a voice actor I got to give my opinion on the writing and make suggestions about where the story should go. It was an awesome experience to be a part of the storytelling process.”

According to Nelson, the development, recording, and editing processes have become much more efficient as the series has progressed. “The process has evolved over time as I have learned what works best,” he says. “In season one, we had little to no time to refine or rehearse the material with the actors. To contrast that, we just recorded season five last fall and I had the cast work through the scripts throughout the semester. Those scripts went through four to five edits each and the cast was able to be more familiar with the scripts and the moments within the story. That was so helpful.” 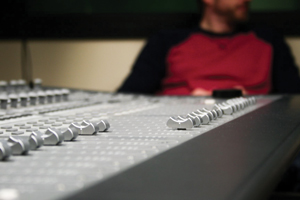 Although he is glad that things are running more smoothly now, Nelson is also grateful for those early days of production. “We moved so quickly; we were still very green,” he notes. “But you know what? I’m happy for that learning process because it’s important for students to see that the process doesn’t have to be perfect before you start creating. I wish it was, but I’m 40 years old; I know life isn’t perfect and you keep moving, keep creating.”

Reception of “The Encounter” has been overwhelmingly positive thus far. Several episodes have won awards at the Broadcast Education Association; “The Banishment,” episode 13 of season one, won a Best of Festival award along with a cash prize last year and episodes from season two took the top two national awards this year. Additionally, the series was awarded Best New Show by the Seneca Awards in 2017.

Nelson notes that he and the entire team are honored by this recognition, but the series’ popularity amongst fans globally thrills him the most. “It’s being listened to all over the world,” he says. “In fact, right now Indonesia is a hot spot, which is just mind-boggling. But that is why we are doing this: to speak to this generation, wherever they are. I hope the audience for the show grows and that we are able to connect more people to it.”

As “The Encounter” team works on the final two seasons of the series, Nelson plans to continue to strive for excellence and to enjoy every minute of the process. “I love creating something that has meaning, and I want it to be excellent as well,” he says. “With ‘The Encounter,’ I am surrounded by like-minded students, staff, and faculty. It’s so rewarding to be surrounded by people who want excellence and who are willing to give so sacrificially to the time needed to pursue it.”