Sometimes heralded as the “Aristocrat” of hedging topiaries, boxwoods have held the limelight as a favorite shrub for centuries. They are prized as a slow-growing, easy-to-maintain ornamental that looks as picturesque in tidy, trimmed rows of historic, formal gardens as it does gracing the porch steps around farmhouses and community buildings.

For many home gardeners, boxwoods are a timeless American tradition, recalling sentiments of days gone by. In fact, they arrived in what we now call the United States sometime around the 1650s, before it was even an independent nation. Many European immigrants traveling to the New World carried boxwood cuttings with them, and they made a strange new place feel more like home. But these highly cultivated bushes actually have an even longer history as a decorative landscape plant. Archaeologists have discovered evidence that boxwoods were trimmed and shaped to adorn the pyramids of the ancient Egyptians in 4,000 B.C., making it the oldest known ornamental shrub in the world.

There are over 200 varieties of stately and versatile boxwoods, each with their own unique shapes, leaf characteristics, and growth potential. Unfortunately, all of them are vulnerable, some more than others, to a fast-acting and deadly disease known as boxwood blight.

Boxwood blight spread rapidly through Europe in the ’90s, ravaging centuries-old historic gardens. Finally in 2011, it made its long-dreaded arrival in America, first in Connecticut and North Carolina. Today, it exists in almost every state, and has taken a toll on the gardens of homeowners and historic estates alike. 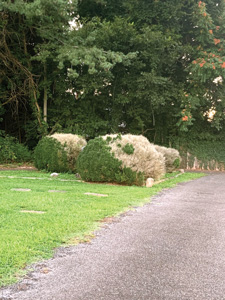 A “blight” in plant science is a rapidly progressing fungal disease that causes chlorosis (loss of green coloration), browning, and if untreated will lead to the death of plant tissue. For boxwoods, the fungal spores that cause the blight are highly transferable, very sticky, and can be spread from nurseries, plant clippings, and even contact, before the bush is showing symptoms. The pathogen thrives in warm, wet environments, and spreads most rapidly from July through September, though it can be spread and contracted all year long. The most noticeable symptom of boxwood blight is sudden and fast-acting defoliation, or the loss of leaves.

This defoliation is exactly what alerted Lynchburg resident Lisa Richards to the problem in July of 2016. Richards installed English boxwoods around her home as soon as it was built in 1995. She had some small ones, and some as big as eight feet tall. Unfortunately, she was one of the first in the region to deal with the devastating effects of boxwood blight.

It all started when she purchased some new shrubs from a big box retailer in order to fill some holes in her landscape. She planted the young bushes and mulched heavily. The very next day, she noticed that two of her boxwoods had begun to turn brown and lose leaves. Of course, at the time not much was known about boxwood blight, so Richards assumed that the mulch was the guilty culprit. She went out of town for a few days, and when she returned home, she found that the defoliation had spread.

“It looked like someone had taken a blow torch to them,” said Richards. She spoke to a friend who suggested that the blight may have been responsible for the damage, and when Richards sent samples out to the state lab for testing, her suspicions were confirmed. She contacted professional horticulturalists who came to her property, dug up all of her boxwoods, and even removed and replaced the existing soil. “They wore hazmat suits and did everything they could to contain it,” Richards explained. “But a squirrel, a dog, or a neighbor can carry the spores from one yard to another.”

Richards ultimately lost 60 boxwoods in total, and now, there are very few healthy ones left in her Boonsboro neighborhood.

Horticulturalists have responded to the threat of boxwood blight with a tremendous effort to develop a whole new selection of bushes that don’t fall prey to blight, or even other serious boxwood problems, such as leafminer insects. While the classic English varieties with their tightly packed, oval-shaped leaves are extremely vulnerable to blight—and American varieties are also at great risk—many Asian cultivars are more disease-resistant. 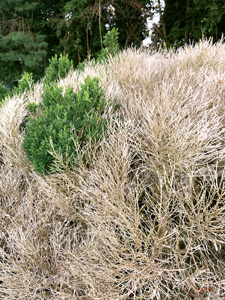 Saunders Brothers, a family-owned nursery in Nelson County, is one of the largest providers of boxwoods and topiaries in the southern United States. They had the blight on their radar long before it came to our shores, and once it did, they began conducting extensive research into identifying and propogating the most disease-resistant boxwood cultivars possible. In fact, since Richards replanted her landscape with Green Beauties from their nursery, a Japanese cultivar genetically bred to stand up to the aggressive blight, she says that her yard looks wonderful again.

In addition to offering many of the well-known Asian varieties, Saunders Brothers has developed what they are calling “NewGen,” which are bred to closely resemble the English classic, but have a strong resilience against blight, and hold up to leafminers even better than some of their resistant contemporaries.

Boxwood blight thrives in wet, rainy conditions with temperatures between 60 and 77 degrees. As we enter into late summer and early fall, conditions for the growth and spread of blight are ideal. Saunders Brothers has really been a driving force behind defeating boxwood blight, and the tips we’re about to share have come straight from Bennett Saunders himself.

If you believe you have a plant that has become infected with blight, consider these practices to rid the disease from your yard, and prevent it from spreading:

• If you live in a rural area, the best way to get rid of blight once and for all is to burn the infected plants on site. Fallen leaves and stems carry the disease and can be easily transported by people and animals, so avoid moving it as much as possible. A flame torch will do the trick.

• If burning is not an option, wear disposable gloves, and carefully gather all infected plants into plastic bags before transporting them to the landfill. Be sure to contain the material to prevent spreading as you drive through town.

• After you have removed the diseased boxwoods, avoid replanting in the same spot for at least a year. The fungal spores can survive under the soil, but grow weaker and die off as time passes.

• Thoroughly clean and sanitize all of your tools and clothing after working with infected materials. 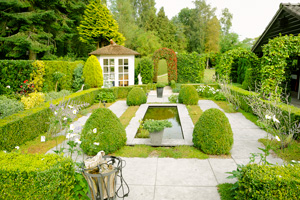 If you’re looking to add boxwoods to your home landscape, here are some great planting tips to help ward off diseases and keep your boxwoods healthy and happy for a very long time:

• Plant Selection: Choose a disease-resistant variety. Saunders Brothers’ website offers a complete list of options that will stand up to blight and leafminers. (See box at bottom of page.) If you purchase from a local nursery or big box store, ask if they participate in the extension agency’s boxwood sanitation practices to ensure you are not purchasing infected plants.

• Proper Planting: Choose a spot with good drainage, where rain water doesn’t pool up or linger. Dig a hole twice as wide as the root ball of your new boxwood, and allow the top of the root ball to sit about two inches above the soil surface. This elevation will need to be maintained over time to ensure proper drainage.

• Mulching: Saunders said that the importance of mulching cannot be overstated. In addition to a host of other benefits, mulch minimizes the splash of spore-contaminated rain water onto the leaves of nearby plantings. Rain water transfer is thought to be the most common way that the blight spreads. Mulch also creates a physical barrier between infected, fallen leaves and healthy plants. Light layers of mulch should be added every year, preferably in early spring. Choose a well-aged mulch option, and surround your plant with mulch of about one inch deep.

• Watering: Soak the root zone of the new boxwood thoroughly as soon as planting is complete. Then water on an as-needed basis to help it through periods of drought.

With proper sanitation practices, stronger boxwood varieties, and a little common sense, boxwood blight can be eradicated from your yard and your neighborhood. Eliminating this disease is the best chance we have at preserving existing boxwood plantings and continuing the tradition of boxwoods in the landscape. Doing your small part in your home landscape will have great and lasting effects on the state of boxwood health in your community.

Tons of helpful tips and information, as well as interesting boxwood and boxwood blight facts, can be found at the Saunders Brothers website, www.newgenboxwood.com.