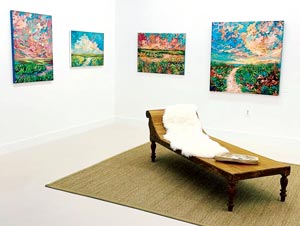 Anyone on the hunt for a new piece of local, original artwork is no longer limited to attending a festival or stumbling across something they like hanging in a restaurant. New niche fine art galleries are opening and thriving in Central Virginia, showing that the art industry is worth the investment.

Findings Art opened in the Boonsboro Shopping Center in March.

“We had [a full lineup of]artists before we even had a space for them to look at,” said owner Amy Calandra Davis. “So that tells you that people were craving this.”

While Davis says there have been small pockets in the region for artists to display their work, those stores sell other items.

“This is the first time we’ve had an actual retail gallery space solely dedicated to the display and selling of original artwork,” she said, adding that she hopes to offer an even wider variety of artists and artwork as time goes on. 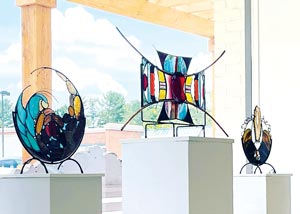 Davis said there is actually a large artist community in Lynchburg, which people may or may not know about.

“We do have a very thriving, active art community,” she said. “And on the flip side, we don’t have enough outlets for artists to routinely display and sell their pieces.”

Artists would normally have to wait until they could get into a show at a gallery such as the Academy Center of the Arts or hang their work somewhere like a local restaurant. 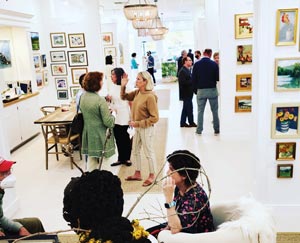 “Being an artist myself, you want to get out there and create, but where are you going to put them once you’re done?” she said.

Findings won’t prevent artists from showing anywhere else; Davis said she wants her gallery to be a place where they can routinely count on having wall space for as long as it’s working for them.

The selections from Findings range from local to national, large to small, with various techniques, styles, mediums, and price points. 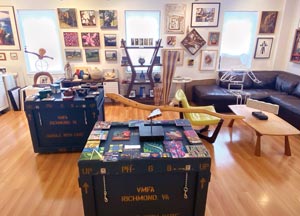 In Wyndhurst, above Montana Plains Bakery on Tradewynd Drive, Steven Coates has recently reopened his art gallery, Steven Francis Fine Art. He first opened the business in the fall of 2019 but closed it in March 2020 when the pandemic shuttered many businesses.

Coates says his gallery is more of an “art project” that he hopes will naturally evolve into a destination visit from travelers near and far. 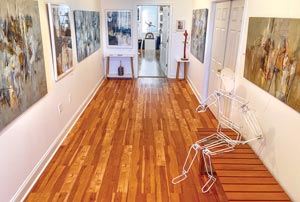 He had the chance to hold one show in November 2019 and plans to hold two more this coming fall.

The fine art gallery has 50 percent local artists; the other half is national and international artists, some coming as far as Argentina and California.

He says it’s new for Lynchburg to have these kinds of fine art stores.

“There was really no niche or specialty galleries, but the market is good for art galleries right now,” he said. “Especially with the pandemic, people want art on their walls. People connect with art and people who have had art for a while, it’s part of the family, it’s how they breathe. Art is like that.” 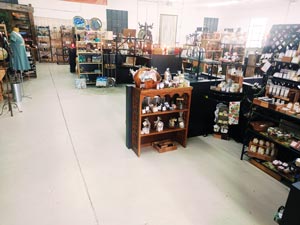 Coates said he isn’t so much worried about sales but wants to expose the community to art.

“I look for things that I like that I’m passionate about,” he said. “It’s a combination and so then the people come in here and they get excited about it too. I’m just trying to encourage people to get more involved with it.”

ElectricCoArt opened in Bedford this year and has a fine art gallery and bistro alongside a large store that features locally handcrafted items, such as pottery, metal sculptures and furniture. They have confirmed one artist, Felta of Floyd, Va., and are in talks with several more that they plan to announce in the coming months.

“The responses [from the artists]have been overwhelmingly positive,” said co-owner Wendy Witt. “Artists are happy to see us create this, so it is a win for both the artists and the art collectors.”

Witt believes the pandemic, with all of its challenges, really paved the way for a surge in the art market. 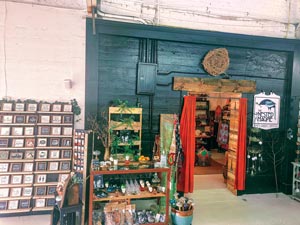 “Art is a release for emotions, regardless of what directions those emotions may be traveling in. The quarantining that has been happening for the last year and a half has elevated a lot of emotions—anger, confusion,” said Witt. “However, some people really enjoyed it! So, there needs to be an outlet to let those feelings go, whether you’re making [the art]or enjoying and interpreting the art for your needs.”