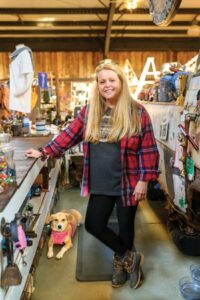 A 1963 Econoline serves as the backdrop to Debbie Sirockman’s desk at Virginia Found Goods, a giant warehouse filled with, well, just about everything. The difference between antiques and junk, she says, is that antiques are “authentic vintage.”

“Almost everything in here is one-of-a-kind,” Sirockman said of the stock in her warehouse, which she opened two years ago just outside of Altavista.

The Econoline is not for sale. Neither is an old Airstream, but both are imposing props that entertain customers.

Her shop was one of several stops I made one November day as I ventured out to learn about the art of “antiquing.” Whether you want to make it a daytrip, or a weekend getaway, experts like Sirockman say authentic “antiquing” really is all about the hunt—and you might have to leave your zip code.

A native of New Jersey, Sirockman searches far and wide for her own treasures. Flea markets, garage sales, salvage, and estate sales are primary sources, from places as far away as Italy and Amsterdam.

At Lou’s Antique Mall in Amherst, my next stop, Nancy Simmons said their visitors have come from Russia, France, Wales, and England. The Russian visitor was looking for old soul albums, she said.

The mall concept allows a variety of dealers to work from one location. At Lou’s, Simmons said about 12 dealers sell a variety of goods, and each dealer usually has a specific focus. Lou’s has an even larger store in Danville.

Simmons said at their store, they have seen a resurgence in the furniture market. “Right now furniture is a big seller, especially the old oak,” she said.

The shop is full of large farm tables, buffets, Amish furniture, hall trees, and even an old ice box.

“Just about everything goes through a slump, then it comes back out,” she said. “People like unusual things. They love the jumble. They never know what they will find.”

That treasure hunt aspect is what keeps many people coming back, sometimes week after week, as dealers bring in new items all the time.

At Bell Treasures in Bedford, my third stop, I ran into vendor Terri Foster who is always adding new items to her booth. She’s been selling there for nine years. “I feel like you’re cheating if you find it on eBay,” she said.

Many people use the internet to get an idea of what an antique is likely to sell for, which is an excellent place to start, but there is nothing like finding something you want in person. It’s also easier to assess what shape an item is in.

Cheryl Reynolds, another vendor at Bell Treasures, said small things are popular in their two-level store. Primitive items such as braided rugs and dolls are popular, as are mid-century modern pieces. Quilts, crafts, vintage clothes, paintings, and toys fill every nook and cranny.

Because of its proximity to the National D-Day Memorial, Bell Treasures has a section of World War II items, including uniforms, and often gets shoppers who have visited the memorial. Reynolds said one young shopper from Normandy told her he had met his American wife at the memorial.

Bell Treasures also sees a lot of local shoppers who come in frequently because new items come in almost daily. Miranda Laucella, 22, was recently examining shelves and admitted she does more looking than buying.

“You never know what you’re going to find,” she said, noting that her mother got her into antiquing.

Art Dodd, owner of Estates Revisited in Lynchburg, worked for Estate Specialists until it closed seven years ago. When he opened his own store on Lynchburg’s Main Street, he had a good understanding of what sells. He is in the business of buying whole estates, as well as putting items on consignment.

Bedroom furniture, especially queen and twin beds, are popular, as well as small end tables, he said. For the kitchen, farmhouse tables made from reclaimed wood by a local carpenter can be ordered at Dodd’s store. Any furniture made from solid wood sells well because customers know it’s not going to fall apart, he added.

Many items in antique stores aren’t truly antiques, but college students and first-time apartment dwellers aren’t concerned with age, as much as affordability, Dodd said.

Glassware, including china, crystal, and stemware is very difficult to sell, as are any collectibles.

“Nobody’s collecting anymore,” he said. “The younger generation is into more minimal décor.”

While Lynchburg’s downtown has several antique shops, they all have their own niche. In addition to furniture and primitive cabinets, Dodd said vintage local artwork is popular, even if the artists are not well-known.

Vintage postcards and scenes of the city also sell well.

Regional books are in demand, including Allen Chambers’ Lynchburg: An Architectural History. “That’s the one everybody hunts for,” Dodd said.

Aside from the thrill of the hunt, antique shops provide the ultimate in reuse. Back at Virginia Found Goods in Hurt, salvage is big these days, Sirockman said, noting that corbels are popular. These shops also offer value—for example, a new door from a big box store can easily cost $400, while a solid oak salvaged door might only be $100 and last years longer, she said.

Sirockman said perusing is often times the point. People who spend a day visiting antique shops often want a single, smaller item or just enjoy walking down memory lane. Some search for pieces in a china pattern that matches one they inherited.

So whether someone actually finds a treasure they are looking for, an antique store is sure to bring back childhood memories and provide a peek at the past. “Sometimes it just therapy,” Sirockman said.