Sean Bailey, the owner of Crisp restaurants, has always had plans for the warehouse space nestled behind the store’s downtown location, even though it has been vacant for years.

Over the past few months, that plan has turned into action with the creation of greenhaus, a one-of-kind beer garden that serves not only as Lynchburg’s latest restaurant, but what Bailey calls a “creative hub.”

“[The space was designed] to foster creativity,” Bailey said. “This is about taking some of the best creative talent in Lynchburg and making a space that’s unique, special, and serves the larger population.”

Right as you walk through the door, you get that feel. Customers are greeted with a custom, vibrant piece designed by local artist Andrew Riscart, who was featured as the Artist Profile in the July/August issue of Lynchburg Living.

“He even added a UFO on there for me,” Bailey noted. 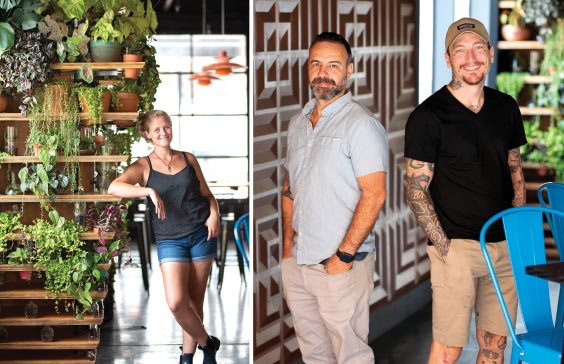 As you enter the main dining area the space is welcoming, with lots of natural light from the garage door windows. Plants are strategically placed around the space curated by Susan Hertzler, plant supplier and manager for the greenhaus.

Even the plants serve a purpose. Hertzler curated each plant, picking out those that would thrive in the space. Each pot has a QR code, which talks about each plant and how to take care of it.

“There are also so many different colors. I don’t think people realize how many different species of plants there are that you can grow indoors or outdoors.”

Other elements include local woodwork, such as the carved bateau above the seating area, and a geometrical wall sculpture that was designed by Bailey. The sound system was designed by Lynchburg musician Ben Jacobs and was specially created to allow for anyone to perform regardless of whether they have equipment.

To summarize, if Bailey couldn’t find it, he found someone who created it. He even took on the task of constructing the back wall leading to the patio and the bar, which has self-serve taps for different kinds of beer.

The menu serves to inspire as well. Bailey wants the food offerings to be a way for chefs and cooks to express themselves. While the greenhaus will serve traditional beer garden food, the team hopes to have rotating menus and pop-up brunches.

Bailey believes that bringing in more artists to the downtown scene will continue to help Lynchburg build a unique identity.

“The artists come in and make the place special and then everyone gets involved,” he said.

While Bailey didn’t grown up in Lynchburg, he moved to the city when he was 19 so he has seen downtown go from a ghost town to a thriving area full of shops and restaurants. He believes the momentum is there to keep thinking outside of the box and make each business become more entwined with the local creative community.

“As a person that’s slowly started one business after another, it’s easy to say, ‘Oh it’s Lynchburg. They’re not ready for it.’ But that’s a bunch of baloney,” Bailey said. “People are dying for a taste of the city. When places like this come in, it ushers the way for other people to do the same. Downtown will become the better alternative.”