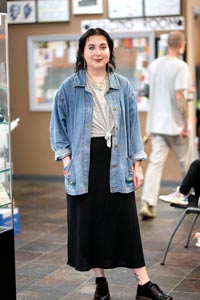 In August, tattoo artist Hannah Burnside woke up in Jerusalem. After long layovers, even longer flights, and hassles through airport security, she walked through the streets of the Christian Quarter and found herself in front of a solid metal door. On the door, no other markings were clear besides a phone number written in permanent marker.

“I called the number and this dude just rolled up in an old Harley,” Burnside, a Savannah native who has been living in Lynchburg since college, recounted. “His leather jacket had ‘Holy Land Bikers’’ on the back, which is a Christian biker club in Jerusalem.”

Stepping off of the bike was Wassim Razzouk, a 27th generation tattoo artist and the current owner of
Razzouk Tattoo. 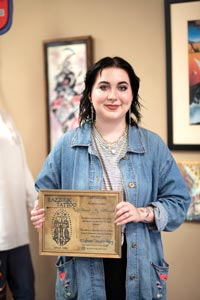 For the week following that phone call from the crowded streets of the Holy City, Burnside worked alongside the Razzouk family, learning their tattoo styles and, more importantly, the legacy that they represent.

“The Razzouk family immigrated from Egypt 700 years ago and followed a similar path to Jerusalem that folks take on pilgrimages to the Holy Land,” Burnside explained. “To commemorate their pilgrimage, people would get a tattoo of a particular saint or something that represented the pilgrimage. If they returned, say a year later, they would get the date tattooed underneath the original tattoo. So, some people would have dates stretching down their arm that marked their annual pilgrimages.”

Wooden carved stamps were used as stencils for the tattoos—stamps that are still used some 700 years later at Razzouk Tattoo. 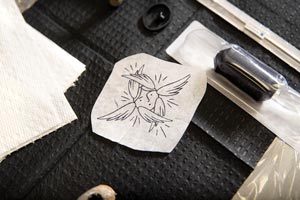 “There are some stamps at the shop that they believe are older than that,” Burnside said. “But they just can’t date them back that far.”

During her apprenticeship at Razzouk Tattoo, Burnside immersed herself into the culture and worked tirelessly alongside the Razzouk family as they helped people memorialize a significant journey.

“One day, we had a group of 20 or 30 Armenian pilgrims come by the shop and ask for cross tattoos to mark their journey,” she said. “It was really cool seeing all of these groups who have different takes on religion, but whether they were Christian, Jewish, or any other religion, Jerusalem marks the Holy Land for all of them. Knowing that they all didn’t believe the exact same thing, but still gathered for the same goal, was really beautiful.”

Despite the language barriers—folks travel from all over the world to get tattooed at Razzouk—Burnside noted that she still found such deep bonds with the people she was able to tattoo. 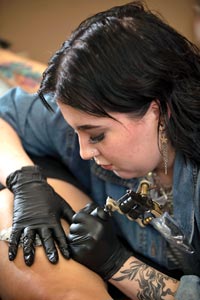 “They have full trust in you even though you can’t understand each other,” she explained. “That’s a really powerful thing and a really amazing experience to have.”

That level of trust is something that Burnside has worked to cultivate since she began tattooing in 2020. A tattoo apprentice at Caspian Tattoo in Lynchburg, Burnside puts a big emphasis behind comfort and trust with the people she tattoos.

“I understand that a lot of people come into the shop with body image issues, or not loving a certain part of themselves and I just want our time together to be a time of complete ease and confidence,” she said. 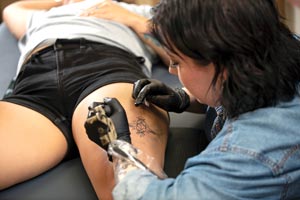 After returning home from her Razzouk Tattoo apprenticeship, Burnside is now an official Razzouk ambassador, which means she is in possession of some of the antique tattoo stamps and has expressed approval to tattoo those designs in Lynchburg. As one of only nine current ambassadors—all of whom are situated around the globe—this is an incredible privilege and honor.

“I even had the opportunity to design my own stamp before I left,” Burnside explained. “So now my stamp sits in the shop at Razzouk and they will tattoo my stamp for folks all over the world. And I can tattoo it here in Lynchburg, as well.”

Burnside shared a Ram Dass quote that she felt was particularly poignant in commemorating her journey to Jerusalem—her own pilgrimage in a way. “The quote is, ‘We are all walking each other home.’ I can’t think of a better way to describe what this experience has been like, or what these tattoos mean, than that.”