Lynchburg Living Editor Shelley Basinger: Lawrence, you were drawn in to the art world in adulthood. Tell us about the trip that influenced you. 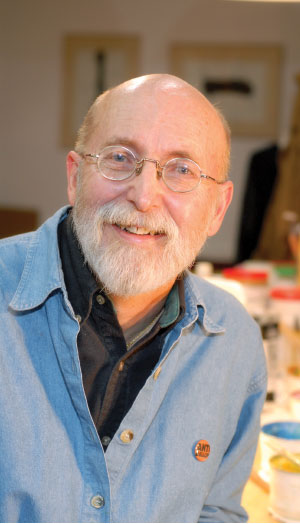 Lawrence Bowden: I am an emeritus Professor of Religion and Culture (and also the husband of Lynchburg artist, Karen Bowden) so art has always been important to me. But I began painting in 1997 as part of an academic sabbatical where I studied with internationally recognized Zen painter, calligrapher, and scholar Kazuaki Tanahashi. For a decade I concentrated entirely on practicing Zen brush painting using hand ground ink on rice papers. After retiring in 2007 I ventured into acrylics and eventually discovered Flashe, a vinyl water medium I now use exclusively.

SB: How does Flashe work exactly?
LB: Flashe works much like an acrylic paint except that it uses a vinyl polymer. This allows it to tolerate layering well and, in the way I use it, to reveal forms painted just below the surface as though the painting were translucent. In fact the painting changes with the light visually as you change your angle of viewing. The gold catches the light as though it were alive. You can’t capture that with a digital image. It has to be experienced. I like that it tends to evade the camera.

SB: Your forms often look almost like cut-outs, like they’ve been pasted on. How do you get that kind of texture?
LB: It’s called layering. I use multiple thin coats of paint and that takes a good bit of time to do. But the buildup of the paint surface creates an edge to the form that is actually a micro-texture rather than a visual illusion. That’s why it looks like a cut-out that could almost be plucked from the surface. Unlike painterly globs of pigment, layering retains the appearance of being smooth and continuous. That’s a product of the repetitive, slow buildup of
color. The texture then is not a trick, it’s real.

SB: How does the concept of Zen influence your art?
LB: What Zen does (or tries to do) is to teach you how to see. Not with words; not with didactics; not even by example. The Cistercian monk, Thomas Merton, put it this way: “Zen seeks not to explain but to pay attention, to become aware, to be mindful. In other words, to develop a certain kind of consciousness that is above and beyond deception by verbal formulas—or emotional excitement.”

SB: This is a good lesson for all of us as we view different types of art, right?
LB: I’m trying to encourage everyone to look beyond the surface of things they already recognize as familiar, things that are easily named, stuff you can identify quickly and just as casually dismiss. I want to awaken the capacity to see and to see more than meets the eye. I want to cultivate a viewer’s visual intelligence because I believe that’s what art can do when it’s being “art” rather than decoration.

It can change not only what we see but how we see and so expand our awareness. And maybe change our mind… there’s magic in that.

SB: You have a show at the Academy Center of the Arts in March. Which I’ve heard is a rare occurrence!
LB: That’s right, my show “Learning from Zen” opens in early March in the Academy’s Ann White Gallery. Although my work has been juried into both national and regional shows I view my painting as part of a Zen practice and rarely choose to make a show of it. However, I am honored to say my work has been curated by jurors such as Carter Foster of the Whitney Museum of American Art, Margot Norton of the New Museum of Contemporary Art in New York, and Doug McClemont, writer for the SAATCHI Gallery and regular contributor to ARTnews.