But something was different when the 46-year-old and his father, Mark Russell, stepped outside their Boonsboro home nearly a decade ago.

A bluebird, perched on a tree limb several yards away, caught their attention. Bright blue coated the feathery creature’s head and back, and a rusty orange pigment highlighted its soft belly and neck.

“Chris watches nature very closely,” Mark Russell, 71, said of his son who was born with mental health challenges, intellectual challenges and a seizure disorder. “He loves walking through the woods and observing animals.”

The bird remained on the branch for a short period, possibly looking for soft grasses or pine tags to enhance its nest. After surveying its surroundings, it fluttered out of sight—but not out of Chris’s mind.

His observation, although brief, prompted a conversation with his father that ultimately changed Chris’s life—and the Lynchburg community—for the better.

That day, Chris learned about the struggling bluebird population and the necessity for human intervention. Bluebirds experienced a decline in population during the 20th century, but have gradually recovered thanks to the efforts by many, including Chris Russell.

Bluebirds reside in meadows and small openings surrounded by trees. You may see them perched on wires or low branches, and they commonly use woodpecker holes as homes, according to the Cornell Lab of Ornithology, a member-supported organization dedicated to the understanding and protection of the natural environment.

After observing the bluebird in its simple, yet beautiful setting, Chris decided to make a difference.

“For the Birds” was born. 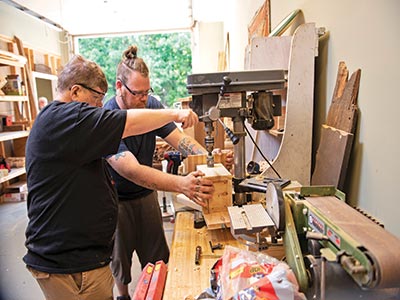 For more than eight years, Chris has used his woodworking skills to handcraft high quality bluebird houses, wood duck boxes and other products. He operates his business at Wall Residences in Madison Heights, an organization that assists individuals with intellectual and developmental disabilities.

He sells his woodworks to members of the greater Lynchburg community and to several retailers including Ace Hardware.

Chris uses western cedar and pine to craft his birdhouses. Unlike many birdhouses purchased online, Chris fastens his birdhouses with wooden screws, not nails, to guarantee a secure, crack-free surface.

Chris works hard, sometimes daily, and he occasionally juggles multiple orders at once. While he executes most of the hands-on work, his father and several employees assist when needed.

“I just love for Chris to be able to make a difference and to be proud of everything,” Mark Russell said. “I’m 71 and he’s 46, but I just love for him to have a real productive and positive life.”

Chris’s intellectual disabilities include reading comprehension and math, and his medical side effects result in weight gain. He also struggles with PTSD and anxiety.

Similar to those with Asperger syndrome, Chris cannot read emotions. He does not have Down syndrome, although many may mistakenly assume.

Despite his disabilities, Chris’s love for people outweighs his condition. You may find him at a coffee shop with a friend, playing bongos at his church, or volunteering with Meals on Wheels.

“[I like] going out and having fun, staying happy, seeing people and having regular conversations with them,” Chris said.

Through his hard work, love from his family and gracious support from Wall Residences, Chris has taken agency over his life. Not only has he helped the natural habitat, but he has also made his own money to purchase CDs, movies, food and coffee.

Other than Chris’s earnings, “For the Birds” does not generate profit, but he normally breaks even on materials.

Mark expressed satisfaction that his son has pierced the traditional mold of citizens with disabilities by staying occupied and adding value to the greater Lynchburg community—instead of simply occupying a facility.

“The important thing for Chris is that he owns his own life,” Mark said. “People need to be in the community, not just living in a nice house somewhere.”

Watt Foster, CEO of Foster Fuels, has been one of Chris’s faithful customers for years, purchasing more than 120 birdhouses to spread over 2,000 acres.

“When I see all the bluebirds on my farm, I appreciate Chris and his efforts,” Foster said. 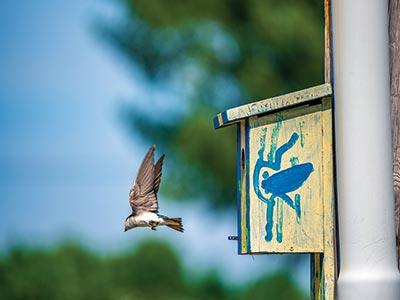 Foster noted that Chris’s birdhouses are excellent, complete with precise sizing, crawl capability for baby birds, and an easy opening door for nest cleaning. Chris sometimes even installs small screen ladders for baby birds and ducklings to comfortably crawl out of their home.

“[Chris] is passionate, and dealing local is important to me,” Foster said. “Chris is fun, and I really enjoy being with him.”

Chris has lived in Lynchburg for more than 40 years and enjoys interacting with members of the community like Foster. But the great outdoors is his greatest joy—he loves walking through the woods and keeping an eye out for numerous wildlife including birds, turtles and foxes.

“I like to watch birds, and I love nature. It’s neat to see all kinds of nature,” Chris Russell said.