For many, finding a consistent exercise routine can be difficult, while ruts tend to come easy—often for men a revolving door of bicep curls, bench press and other upper body strength sets. A way guys (applicable to anyone, of course) can break the cycle, to find workouts that are not only fresh and challenging but yield desirable results as well, is to step outside the box and into a group fitness class.

Certain exercise programs, for whatever reason, have been labeled, generally, as “masculine,” like strength training, or “feminine,” such as yoga and other core-based regiments, which is unfortunate because both sexes can find better results, and more satisfaction to boot, in broadening their fitness horizons. Incorporating a balanced exercise routine of strength, core, flexibility and cardio leads to a healthier overall being.

So, while some men might initially grimace at the idea of trying yoga, Pilates or barre (a ballet-inspired discipline), upon doing so, like a number of men do every day (without having their arms twisted), they would be surprised at the benefits these programs can bring in helping them move toward their wellness goals.

“When men and women open themselves up to different areas of fitness it always ends well,” explained Donna Barber, a trainer at Kratos Fitness and Interval Studio on Forest Road (KratosFitnessStudio.com), “as long as you have the right instructor and the right environment for you.” 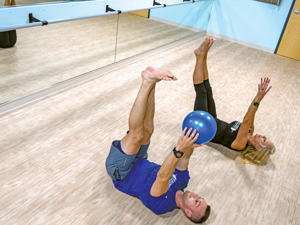 GETTING TO THE CORE

Barber has been a fitness professional for about three decades and holds certifications for personal training, group fitness, nutrition and collegiate strength and conditioning.

“I have trained literally thousands of males with Pilates,” she said of the exercise system developed by Joseph Pilates in the 1920s. According to the Mayo Clinic, Pilates “consists of low-impact flexibility and muscular strength and endurance movements,” emphasizing “proper postural alignment, core strength and muscle balance.”

As an NCAA Division I strength coach who worked with predominantly male athletes, Barber said her “favorite place to start is with Pilates and barre and core conditioning.”

Barre utilizes a ballet bar and incorporates functional movement, much like Pilates, with dance.

“Your core is such a huge part of your body and it is the basis from where your strength emanates from,” Barber said. “If you build your core correctly—especially for men, because most guys do want to get to where they can lift heavy weight—then your form is going to be better.” Smaller muscle groups will be targeted and developed, leading to better movement. “You are going to get greater results and have reduced risk for injury.”

Barber prioritizes safety for her clients, but also makes a point to ensure “you’ll never be bored”—which includes mixing in some Pilates or barre.

“Most guys, when they start working out with me, say, ‘I did not even know I had those muscles and they are on fire right now’,” she said.

Barber likened fitness to building a house, with core strength being “the foundation.”

“That is what I see with Pilates and barre class—they build the foundation correctly.”

Some men might prefer to skip the core and just lift. But core strength “pays dividends in other areas” of fitness.

“If guys build a strong core the right way, they are going to be able to do any type of Olympic lifting or weightlifting or CrossFit or whatever they want to do a lot more safely, and effectively and at a higher level,” Barber said. “If your core is weak then you are not going to be able to deadlift or bench press or squat or do anything else correctly.” 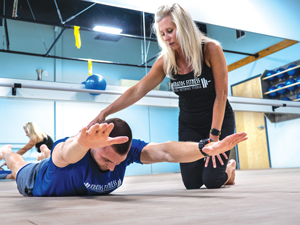 Besides the core strength, the aforementioned disciplines develop flexibility, which helps with movement and to prevent injury.

“Lots of our male clients take yoga,” Barber said. “They find learning to slow the mind and the great flexibility they gain really adds to their fitness regimen.”

For people who work in an office setting, hip flexors and pectoral muscles tend to get tight.

“Women and men both report that when they start group fitness the pain on their joints significantly diminishes,” Barber said. “A program like Pilates, barre or yoga that helps strengthen and properly stretch those muscle groups … [leads to]much higher quality of life and way less pain as you age.”

And “strong, flexible hips are critical to safe and powerful movement,” she added.

It goes back to that foundation of core training.

“It builds a level of flexibility that you aren’t going to get doing traditional workouts and it focuses on muscle groups that most guys would probably never [focus on],” Barber said.

The communal aspect of these disciplines—and other group fitness classes—offers another mental benefit: combating monotony.

“It’s fun to stretch your mind, as well as your physical being, and do things that you never knew that you could do,” Barber said. “I really admire guys who will step out and try something totally different. … I teach a barre class with men and women and it brings a really fun, competitive spirit.”

She said that two male clients who had never tried barre and “didn’t know what they were getting into” later told her that “they can’t wait to come back, that they enjoyed it and they were sore.”

And, getting to the heart of the matter, why many work out in the first place, building from core-based training helps lead to a more balanced workout, without overdeveloping certain muscle groups over others.

“You are going to move better and feel stronger,” Barber said, “but people want to look good when they work out … the icing on the cake is you get a better, more balanced physique.”