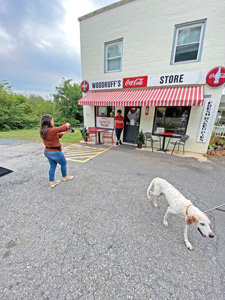 After having to reschedule once due to heavy downpours and storms, we were more than ready to hit the ground running at our cover shoot at Woodruff’s Café and Pie Shop in late September.

The most memorable part of the shoot was a four-legged “extra” who really, really, really wanted to be in the spotlight. The local dog is known to spend some time around Woodruff’s, but they told us they had never seen him be quite this clingy before. (It probably didn’t help that shop owner Angie Wilson was holding a delicious pie in front of her while posing for a photo outside. What dog could resist that?!) 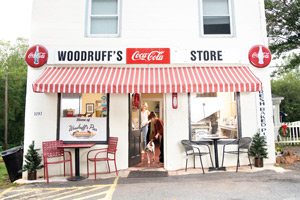 He was particularly fond of editor Shelley Basinger, partly because she spent most of the shoot petting him while holding him back as photographer Ashlee Glen took photos.
He even tried to get in Shelley’s SUV when she left!

Turn to page 133 to see our cover story about Woodruff’s in our Taste department!