When Jordan Nickerson and Jordan Hawkins sat down to discuss potential business ventures in January 2019, they didn’t know that their meeting would end with serendipity in the shape of a bagel.

“I said, ‘I know this is kind of out there, but I’ve always thought it would be really cool to open a bagel shop,’” Hawkins says. “Jordan was taken aback because that morning he and his wife, Holly, were on a walk and he mentioned to her that having a bagel shop in Lynchburg would be awesome.

We saw it as a sign to move forward.”

On November 6, 2020, their vision became a reality when Bacon St. Bagels opened on Rivermont Avenue. The community response to the grab-and-go bagel shop was immediately—and continues to be—overwhelmingly positive. 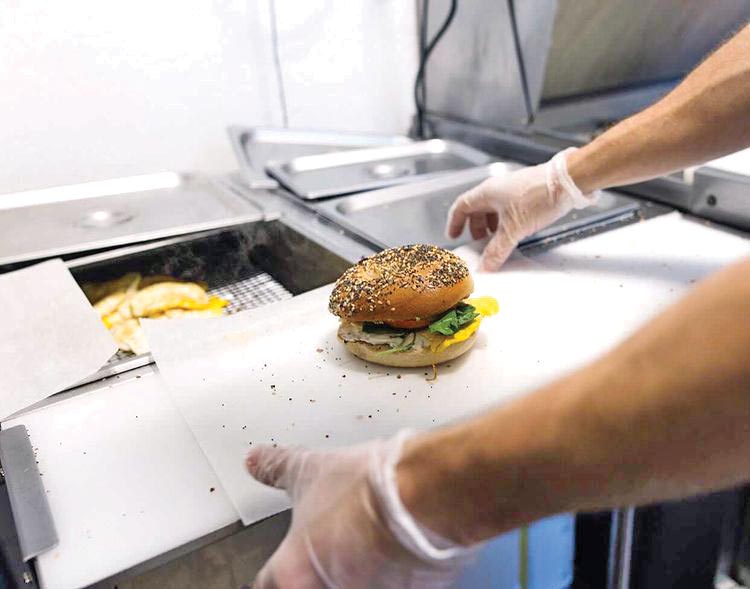 New York–style bagels are boiled before they’re baked, a process that locks in flavor and gives the bagels a delicious chewy density.

Hawkins’ favorite sandwich on the menu, The Lenora, is named after his grandmother. “She was Italian, so the sandwich has mozzarella, tomato, basil pesto, and a balsamic glaze,” he says.

The Nickersons and Hawkinses first met and became friends at Liberty University. The Nickersons opened the successful ice cream shop Rookie’s in Forest and Hawkins worked in local restaurants before deciding to start a business together.
When it came to selecting a location, downtown Lynchburg was the clear winner. Nickerson specifically was very taken with the standalone building on Rivermont that now houses the shop.

“I love standalone buildings,” he says.

“They offer so much space for charm, creativity, and flair.”

The shop got its name from Nickerson’s childhood home street in Massachusetts.

“I’m a huge breakfast food fan, so it’s ironic that I lived on Bacon Street!” says Nickerson. “We had about five names on the board, and Holly came up with that one.”

The brand is built not only on affordable and delicious breakfast options, but also on a positive work culture that values individual employees and customers as well as the community at large.

“I’m very thankful that I get an opportunity to sink my teeth every single day into what I’m passionate about: entrepreneurship and creating healthy and exciting workplace cultures,” Nickerson notes. “I would say we’ve already established a really healthy culture in our building. I love the opportunity to kind of challenge the status quo in the food work culture industry.”

“Our motto is ‘bigger than bagels’,” says Hawkins. “A lot of people are miserable going to work because they feel that they aren’t cared for or valued, and if we can change that, even just for our employees, then it will be worth it.”

In the future, the team hopes to add a takeout window and online ordering and to ultimately expand.

“We want the shop to grow into its potential, and we want to steward it really well,” Nickerson says.