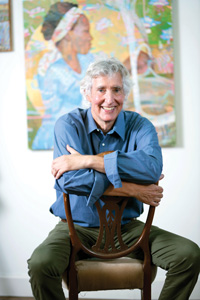 When award-winning Lynchburg artist Kevin Chadwick attended an Old City Cemetery Candlelight Tour two years ago, he had no idea he would be walking away with the inspiration for his next painting. “The actor playing Blind Billy sitting on his stool looked like a painting to me,” Chadwick recalls.

Blind Billy, beloved Lynchburg fifer, was born a slave in 1805 and died a free man in 1855 after members of the Lynchburg community collected funds to purchase his freedom. His impressive musical prowess, displayed at balls and parties and on street corners, endeared him to the community and ultimately secured his freedom before he passed. Chadwick couldn’t stop thinking about Blind Billy and how he wanted to make sure this resilient character was a permanent piece of Lynchburg’s history.

“Upon hearing his story, I was hooked and came back the next week at dusk to ask the startled actor if I could photograph him,” Chadwick says. “He played the part so well that I could feel Blind Billy’s love and connection he had to his flute playing.”

That actor was Chris Evans, a highly involved member of the local theater community. Evans had no reference of Blind Billy before playing the role but says he used his perception of the time period as well as historical anecdotes to represent him as best he could. “People enjoyed his company. He was someone they benefitted from so they wanted him around. But I think not being able to see his environment was his benefit. It also was easier for people to accept him. He wasn’t intimidating,” Evans explained. 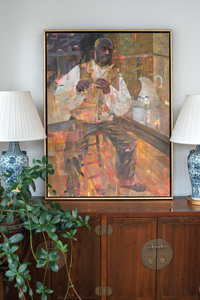 The painting took several weeks to complete, and Chadwick notes that the scene was a product of his imagination. “I imagined a darkened room with a fire going and Blind Billy quietly playing his flute,” he says. “Warm tones were used with bits of wallpaper to give me the chance to paint more patterns.”

Before painting Blind Billy, Chadwick already had experience painting Black individuals. “I had an old photo of a laughing woman in my files and every time I came across it, it made me smile,” he says. “Seeing it again years ago, I decided to paint it and posted it on Facebook. To my surprise, it got the most likes out of any of my earlier works and I thought that maybe I had hit on something. My technique has progressed through the years and more and more I find an invigorating challenge in capturing the likeness using all the beautiful tones and highlights found in painting dark skin.”

Combining oil paints and water-based paints poses an additional challenge, but it is one that Chadwick relishes. “It is a bit of a balance since the skin tones are in oils and the patterns are in flat water-based paints,” he notes. “Until the oil work is done at the end of the process, the paintings sometimes look flat. Painting the faces and hands brings the painting to life in a wonderful and sometimes surprising way.”

Chadwick’s exquisite portrait of Blind Billy is valued at $12,000 and could easily be displayed in a museum, but he chose instead to donate it to the Lynchburg Beacon of Hope and Lynchburg Art Club “Art for Achievement” event in November. The hybrid virtual event includes a live art auction featuring eight pieces of art, as well as a silent auction. Proceeds from the event will support Lynchburg Beacon of Hope’s college and career access work for thousands of Lynchburg City Schools students and help fund “Stay Close, Go Far” scholarships. “Stay Close, Go Far” provides free community college or a scholarship to one of Beacon of Hope’s local college or technical school partners for hundreds of LCS graduates from 2019-2024.

“With all of the violence and injustice happening on our streets these days, I felt I had to do something—and that permanent change can only happen with education,” says Chadwick. “The donation of ‘Blind Billy’ is a tremendous gift to our event this year,” says Joan Foster, Development Director of Lynchburg Beacon of Hope. “It is extremely important to our history in Lynchburg and to Lynchburg Beacon of Hope’s mission to tear down the barriers for young people that prevent them from achieving education and training after high school.”

Fittingly, Lynchburg Beacon of Hope originated in 2011 as a direct result of the City of Lynchburg’s Dialogue on Race and Racism in 2009 and 2010. 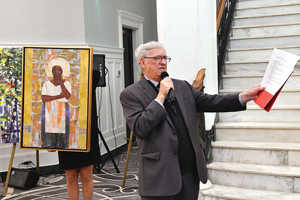 “The education sub-committee of these talks birthed the idea that any student who graduated from a Lynchburg City School would be supported to go on to post-secondary education by this community regardless of their GPA, economic status, or zip code in our city,” Foster says. “Beacon of Hope strives to empower and equip Lynchburg’s young people to seek higher education by building a pathway between high school and higher education.”

To help facilitate this mission, Beacon of Hope operates three privately-funded “Future Centers”: one at E.C. Glass High School, one at Heritage High School, and one at Central Virginia Community College. These centers provide mentoring, assistance in learning and practicing study skills, and much more.

Last year’s inaugural “Art for Achievement” event was a great success, and Laura Hamilton, Executive Director of Lynchburg Beacon of Hope, believes this year’s hybrid virtual event could be even more fruitful. “The Lynchburg community is an extraordinarily philanthropic one,” she says. “We have already seen some long-time events find their way into the ‘virtual space’ and we are hopeful that as our passion for supporting our young people has not waned during the pandemic, neither will the community’s passion for supporting our work.”

Although this year has been challenging in unprecedented ways, events like “Art for Achievement” can provide a sense of hope and forward momentum while also helping us honor the memory of people like Blind Billy, who weathered the strongest of storms while also pursuing his passion.

“Like Lynchburg Beacon of Hope itself, ‘Art for Achievement’ represents the true grassroots nature of the Lynchburg community,” says Hamilton. “Artists coming together, young people coming together, philanthropists coming together—this collective of individuals can and will make a tremendous impact on the community now and for decades to come. It is an honor to be able to play a small role in community transformation, one painting and one student at a time.”