“There’s light at the end of the tunnel” is an apt metaphor as the world slowly emerges from the COVID-19 pandemic, but it’s also literally true for visitors to the Blue Ridge Tunnel between Afton and Waynesboro.

The restored Blue Ridge Tunnel opened to the public Nov. 21, 2020 and has been a popular hiking destination ever since, with more than 35,000 visitors by mid-March.
Visitors can see all the way through the dark tunnel to the other end, but need flashlights or headlamps to make their way through the nearly mile-long tunnel.

There are two trails to the tunnel (see sidebar on page 122), but parking is very limited so it’s best to avoid weekends for now.

Maureen Kelley, director of the Nelson County Visitor’s Center, said they are working on expanding parking on both sides, but when they began planning the $5.4 million restoration 20 years ago, they had no idea what a destination the area would become. 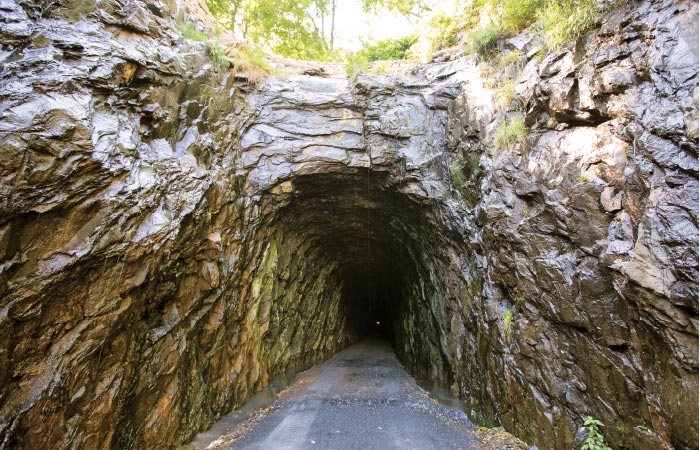 “When this was engineered in the early 2000s, we had only two wineries,” Kelley said. “We knew it was going to be popular, but, wow!”

She added that the opening couldn’t have come at a better time with the pandemic forcing people to spend more time outdoors. Current regulations ask visitors to wear masks if they are closer than six feet to others.

The tunnel itself took eight years to build, from 1850 to 1858, 700 feet beneath Rockfish Gap in the Blue Ridge Mountains, an engineering feat envisioned by Claudius Crozet, a French immigrant who designed the tunnel and was its chief engineer.

While the tunnel is cool—literally an even 50 degrees year-round—the history of the tunnel and the manpower required to create it are the real story. Many say the workers’ toil and loss make the tunnel a sacred place.

The tunnel took about 800 mostly Irish immigrants, who literally left blood and bones inside, eight backbreaking years to build. In an era before dynamite, workers had to pound star drills into solid rock and then fill holes with volatile black powder and fuses. Once the powder detonated, the blast filled the work area with heavy debris.

Cave-ins and unpredictable blasts caused injuries, and at least 14 Irish died in the tunnel. About 190 workers and their family members died from injuries and infectious diseases, such as the 1854 cholera epidemic. Crews on either end toiled to achieve 19 to 20 feet of progress per month.

When the 4,273-foot Blue Ridge Tunnel was completed, it was North America’s longest railroad tunnel and remains the longest constructed with black powder.

Because the tunnel was unable to accommodate larger trains, it was closed in 1944. The Chesapeake and Ohio Railway replaced the 86-year-old Blue Ridge Tunnel with an adjacent tunnel at a slightly lower elevation, which visitors can see is still in daily operation. CSX Transportation donated the Blue Ridge Tunnel to Nelson County in 2007.

That gift launched a regional public-private partnership, the Claudius Crozet Blue Ridge Tunnel Foundation, composed of representatives from Albemarle, Augusta, and Nelson counties and the City of Waynesboro, as well as several local and state agencies.

For nearly 20 years the groups worked to restore the tunnel as a community landmark and recreational and educational resource. One of the biggest hurdles was stopping the flow of water seeping into the tunnel. Visitors are still greeted with a small waterfall flowing down the rock near the eastern entrance.

Crozet had predicted that the Blue Ridge Tunnel would be finished by 1853, but the unexpected hardness of the rock, especially greenstone on the east side, turned out to be an almost unbeatable opponent.

While the Irish workers, many escaping the Irish potato famine, were grateful for their $1-a-day jobs, they stopped work after cave-ins to protest the danger. Crozet hired about 50 local enslaved African Americans, who had laid the track to the tunnel, to help.

Renting out enslaved workers was a common practice at the time, but to protect their investments, the owners made it clear that their workers would not do the blasting. They cleared flooded ditches, repaired grades, helped build culverts, split stone into ballast, spread ballast, and otherwise readied the Blue Ridge Railroad for traffic. Two enslaved men died from a runaway railcar accident on the Blue Ridge Railroad line in April 1854. A third died in a handcar accident the following month, and the enslaved workers were withdrawn from the site.

None of the many hundreds of Irish men and 65 boys employed on the Blue Ridge Railroad could have accomplished their brutal work without the support and labor of wives, daughters, sisters, aunts, and grandmothers. The women gave birth in primitive conditions, swept shanty floors, gathered firewood, drew water from the springs, cooked, and sent their loved ones off every morning, not knowing if they would return. 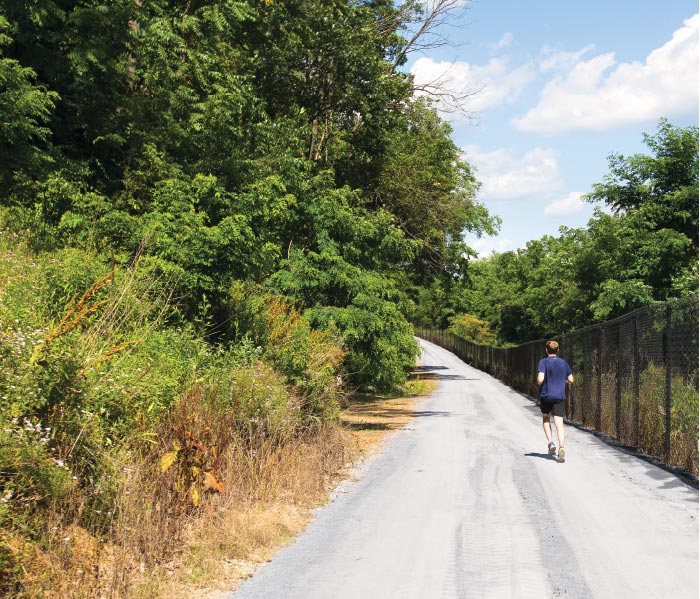 Meanwhile, local citizens—most from Augusta County—petitioned the Board of Public Works three times in 1857, insisting that the Virginia Central Railroad finish the passage. Upset by criticism of his management, Crozet found employment elsewhere and formally resigned in January 1858.

The Blue Ridge Tunnel opened to traffic three months later on April 13, 1858. Though Crozet was not among the dignitaries who rode the first train through the passage, his professional expertise and visionary leadership were essential to the Blue Ridge Railroad and other lines built across Virginia in the 1840s and 1850s.

After strolling through the tunnel and imagining the death-defying work required to build it, visitors have a variety of nearby options. They can quench their thirst and hunger at numerous local breweries, wineries, distilleries, and restaurants along Routes 151 and 6 in Nelson County or in Waynesboro.

The tunnel is located near the conjunction of the Blue Ridge Parkway and the Shenandoah National Park, with hiking on the nearby Appalachian Trail or at Crabtree Falls.
For a selection of four itineraries with other sights of interest, visit nelsoncounty.com.