Introduced by the world’s first human inhabitants and later adopted by Paleo diet enthusiasts is the savory, and sometimes sweet, bone broth concoction. The stock doles out a myriad of health benefits including a strengthened immune system, improved joint health and even beauty enhancements like tighter skin elasticity. But what exactly is bone broth and how can we incorporate it into our daily diet?

Angie Chapman, sales associate at health food store Nature’s Outlet in Forest, gave us the scoop on this prehistoric soup. Chapman explains that bone broth is the result of simmering the bones of chicken, beef, pork, veal, fish and other animal proteins over the course of two days. During the heating process, minerals, collagen and co-factors like glucosamine and chondroitin sulfate are extracted from the marrow, thus creating a super broth known to heal almost any ailment. “The minerals found within the broth act as electrolytes and replenish our body with calcium, phosphorus, [collagen]and more,” says Chapman. “There is a variety of valuable amino acids present as well. [Bone broth] is great for physical recovery as it replenishes minerals lost during exercise and the collagen is healing to joints.” 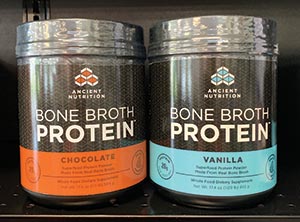 The leader of the bone broth revolution, Dr. Kellyann Petrucci, explains that the variety of bones used in the broth has a significant impact on its nutritional makeup. She recommends knuckles, joints, feet and marrow bones for beef, a full carcass for chicken and turkey, and oxtails, shanks and short ribs for added flavor. Bones can be easily mixed to cater to your preferred flavor and consistency as well.

Its versatility in the culinary scene also makes bone broth an easy addition to any meal. The broth can be made at home, bought fresh in store or prepackaged in flavored powders like vanilla and chocolate. “Most people toss the pre-made protein powder in a morning smoothie, but there are many ways to use it,” says Chapman. She further explains that broth can be incorporated into a variety of baked goods, dips, hot chocolate, coffee and even as a supplement to main dishes to give your meal an extra boost.

For those who like to keep things simple, Chapman recommends eating the broth straight for a high-protein, low-carb and low-calorie snack. Frequent Nature’s Outlet shoppers enhance the broth with vegetables, turmeric, ginger and other spices. “We carry these items for the convenience of others to get these essential nutrients in their busy days and to be their best selves,” says Chapman.