April marks one year since newlyweds Victoria Bartholomew and Jordan Reeves bought their Tudor on Rivermont Avenue. Bartholomew, a local REALTOR®, renovator and historic home lover, had been keeping her eye on the home for a while—25 years to be exact. 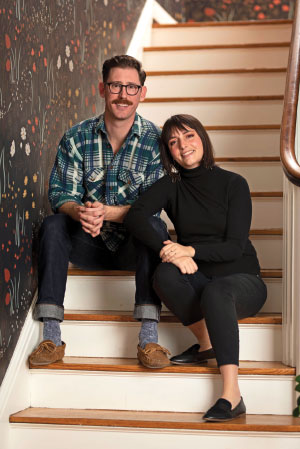 “I moved to Lynchburg when I was eight years old and the house we lived in was literally across the street,” she explained. “I looked at this house a lot when I was a little kid and I really liked it.”

The couple put in an offer on the 2,600-square-foot home without even seeing the inside yet, but it did not disappoint once they did—offering an abundance of natural light, unique woodwork and some untouched mid-century updates. It also helped that they knew the home’s architect was the famed Stanhope Johnson, who designed hundreds of houses and buildings in Lynchburg in the first half of the 20th century.

“All of the [Stanhope] houses are different. Stylistically, there are some similarities, there is a symmetrical look to his homes… but the details are all different,” Bartholomew said.

They were also drawn to the upkeep; although built in 1913, this home needed the least work of any other home they had considered. Most of the improvements they have made in the past year have been cosmetic—such as adding wallpaper, installing new light fixtures and reverting the fireplace’s original tile back to its former glory.

“We stripped years and years of paint off of the fireplace. It was peach. They painted the original tile peach,” Reeves laughed. “Which is extremely offensive if you like the original details of old houses.” 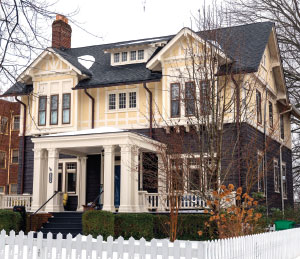 Reeves and Bartholomew not only like original details, they respect them—or, as I noticed as they excitedly showed me around their beloved home, they celebrate them.

“We think it’s those details that make the houses really unique and special,” Bartholomew explained.

That doesn’t mean the couple holds back on infusing the old home with their own unique style. Bartholomew and Reeves have found they often agree on interior design choices, with Bartholomew describing her style as leaning towards “maximalist”—making the most out of her spaces—and modern eclectic.

“But we are not stuck on a certain style. I’m always a believer that if you paint the walls, you have good rugs and you have art… it’s a beautiful space,” she said.

This is particularly evident in the home’s living room, where a mustard yellow couch from Interior Define contrasts gorgeously with rich blue-gray walls (Inchyra Blue by Farrow & Ball) and a red Persian rug.

The couch is actually the only “new” piece of furniture they have in the home. Everything else was purchased secondhand, such as estate sales or on Facebook Marketplace.

“There are stories to every single piece of furniture in this house, which is a lot of fun,” Bartholomew said. “There is definitely something warm and nice about giving something new life.”

One example is the living room’s mid-century storage unit, part of a set, which holds records and other collectibles. Bartholomew purchased the furniture locally from a man whose grandparents had brought it over from Denmark.

Behind the living room is what the couple has lovingly dubbed “the grandpa room”—partly because of its iconic wood panel walls that give off that “gentleman’s library” vibe. The room was added to the home during a major renovation in the ’50s and hasn’t been changed since; Reeves describes it as a perfect “slice” of mid-century style.

The grandpa room is also the place where the couple proudly displays items from their grandparents. Bright green chairs were a gift from Bartholomew’s step-grandparents and a flag from Reeves’ grandparents’ house hangs on the wall.

“My grandfather was an architect so we have some of his books in here and framed some of his plans,” Bartholomew added.

A powder room off the grandpa room was also a later renovation to the home and was a practical addition, serving as the only bathroom on the lower level. Of course, this couple was curious to see what the original space looked like.

“We found the original house plans and this used to be a pass through and there was a door leading in to the kitchen,” she said.

In the foyer, floor-to-ceiling black wallpaper (by Hygge & West) with an eye-catching metallic floral design is more proof of the couple’s willingness to take bold risks.

“We love it because it looks different depending on the light or the angle,” said Reeves.

There is minimal artwork in the foyer, so as not to cover up the wallpaper, which is a work of art itself, they explained. But they did allow one of Bartholomew’s large eccentric cat paintings—one of three cat-focused paintings downstairs. The foyer’s gorgeous crystal chandelier light fixture was not changed, since it was original to the home.

In the dining room, warm yellow walls (India Yellow by Farrow & Ball) are covered in colorful artwork Bartholomew has accumulated over the years. Throughout our tour, she pointed out piece after piece, many of them created by family members, including her grandfather and mother.

Some pieces of furniture can be considered works of art as well. Bartholomew bought the side chairs in the dining room on Facebook Marketplace from a missionary who had just returned to the area.

“The wooden part of the chair was handmade by a builder in Kenya when they were there. The man who bought them did the leatherwork,” Reeves explained.

Plants are another décor essential in this home—and they play the most prominent role in the dining room.

“It’s a jungle in here. I’m a sucker for living things!” Bartholomew laughed. The couple has five “elderly” cats and two dogs—a pit bull, Otis, and Great Dane, Ida, who nudged her way into the photo shoot numerous times.

A unique half-door leading to the kitchen helps keep the pets separated at times. The kitchen was renovated in 2007 and while the couple would love to update the style at some point, they don’t feel like it’s a “need” right now.

They did update the lighting over the island; it coordinates with the dining room fixture found along the same sight line. Red Persian runners in the kitchen break up some of the light wood in the floor and cabinets.

Moving into year two in their beloved home, Bartholomew and Reeves plan to stay busy with more home projects, such as new wallpaper in their bathrooms that were also last updated in the ’50s. But the colorful tile is staying, they say.

“A lot of people will buy these homes, and you can get them very cheap, and they will pull out everything and replace it,” said Reeves.

But as is proof by their dedication to saving fireplace tile and preserving wood-paneled nooks, Bartholomew and Reeves see themselves almost as long-term visitors in their historic home, characters in its evolving story.

“You are not the forever owner of a house,” Bartholomew explained. “You are just a piece in its history.”