Joyce Bailey wandered into the world of pet therapy quite by accident close to 20 years ago, when she took her young Bichon Frise, Amie, to a trainer.

“The trainer said, ‘You know, she would make a good therapy dog’ and told me the tester was coming into town in the next couple of weeks,” Joyce recalls. “Well, she passed with flying colors!”

Before long, Amie was a familiar face (or should we say, snout) in hospital rooms, nursing homes, and classrooms in the Lynchburg area. Bailey later added another Bichon Frise, Cece, to the family about seven years later, who quickly followed in the footsteps of her big sister.

Bailey rotated her therapy visits between the two dogs until Amy passed away four years ago. Now, Cece remains as one of the “old school” therapy dogs you’ll find roaming the halls of Centra Health’s two hospitals.

“It just pleases me so much to bring Cece in and see somebody smile and have a nurse say, ‘That’s the first time we’ve seen a smile from that patient.’ That warms my heart,” Bailey said. 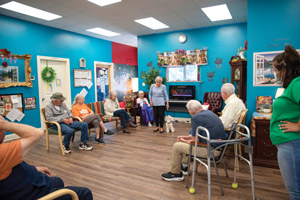 Therapy dogs can often be confused with service dogs or emotional support animals, but therapy dogs do not provide a specific service for people with special emotional or physical needs. As further explained by the American Kennel Club, the purpose of therapy dogs is to lend comfort and affection to people in a facility or setting such as a hospital.

“There are sensory benefits. When you touch a dog, it’s warm and soft. Also, I think there is something about a dog’s eyes. When they look you in the face with those eyes and they are so accepting,” said Bailey.

While you may be thinking “my sweet pooch could be a therapy dog,” many organizations, such as Centra, require that therapy dogs be certified by a reputable organization such as Therapy Dogs International, which is who Bailey used to gain her dogs’ certifications. 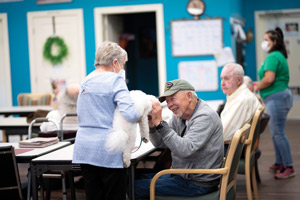 Sylvia Beamer, director of volunteer services at Centra, explained that proof of certification is just the first step in the vetting process for their therapy dog program, which was officially formed in 2015. Dogs also have to go through Canine Good Citizen training from the American Kennel Club.

“We interview the handler as well as the pet to make sure both are a good fit for the organization and patient population. We onboard them just like any other volunteer and have an orientation. Then we will shadow the pet and make sure the pet is doing well and truly fits the therapy mode that we need,” Beamer explained. “After they are shadowed by another experienced handler, they are able to go out on their own.”

Unfortunately, there hasn’t been much paperwork to sift through or shadowing to oversee recently. According to Beamer, there are only two or three therapy dogs on Centra’s list right now. Ideally, they would have 20 to work with in both hospitals.

“During COVID we had pets that aged out of the program or handlers who were in bad health,” she said, adding that the pandemic likely affected certification testing schedules. “Now we are truly looking for more therapy animals and are trying to build our program back up.”

It’s worth the effort because the benefits for patients are clear. Beamer notes that in a hospital setting, oftentimes patients have a furry friend at home that they miss. 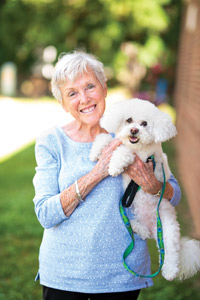 “Or it could be someone who doesn’t have any visitors because their family lives elsewhere. Or simply just someone that the nurses have identified is going through some depression. The nurses are great about making sure the therapy dogs are offered to the right rooms,” she said.

In one case, Bailey and Cece weren’t exactly welcome—at least not at first.

“I stopped by an open door and this patient said, ‘oh no, don’t bring that dog in here.’ I stood at the door and said that’s fine, I hope you feel better. I walked on and pretty soon the patient yelled out to me…. ‘you can come in with the dog.’ So I came in,” Bailey recalls. “A little bit later she said to me, ‘I think I would like to pet that dog.’ She petted her. Then after I left, she got out of her chair, walked into the hallway and called after me… ‘tell me what kind of dog that is, I think I might want to get one of those!’”

“To be honest I have always had a fear of dogs, until we had pet therapy. I had a couple of bad circumstances in the past,” she explained. “Not only have I witnessed what pet therapy does to calm a patient, they also have such a calming effect on me.”

She says the visits from dogs like Cece are also great for hospital staff, who work long hours in a high stress environment. They also encourage handlers to take the therapy dogs through waiting rooms.

“For a family who is waiting for news, that’s a stressful time. There is no simple surgery. When those pets go through the waiting room, that just brings the family some relief,” said Beamer. 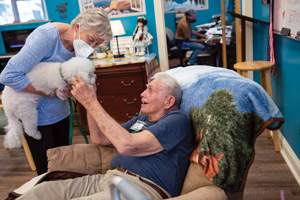 If you are considering seeing if your pooch has what it takes to be a therapy dog, here are a couple requirements for certification, as listed on the website for the Alliance of Therapy Dogs, another well-known and reputable therapy dog organization:
∙ Dogs must be at least one year old.
∙ All breeds are accepted.
∙ Dogs must be current on all vaccines required by local laws, have a negative fecal test every 12 months and be clean and well-groomed for each visit.

The testing process depends on which therapy dog organization you are working with. Each organization has its own set of standards and checklists. It’s recommended that you work with a program that is recognized by the American Kennel Club (see sidebar).

And if your dog does pass the certification test, just a warning—you may end up on the receiving end of the therapy, too.

“There were days when I would pull into the hospital parking lot and think… I don’t know if I have the energy to do this. But when I left I felt 100 times better than when I went in,” said Bailey. “The hospital is a great leveler. You walk into a room and you don’t know whether you are talking to a CEO of a company or someone who lives under a bridge. Everybody is the same. I just felt exhilarated after talking to everybody and seeing my dog make everyone so happy.”