As unprecedented shutdowns from the coronavirus left people without work, food, or places for children to go, local governments, schools, and nonprofits stepped up to be sure people could meet their basic needs. Likewise, volunteers began helping neighbors and strangers alike during these unsettling times. People found creative ways to thank those who kept working, to keep businesses open, and to entertain each other— proving that in times of crisis, our greater Lynchburg community unites. 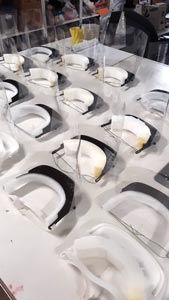 With nationwide shortages of masks and hand sanitizer, Central Virginians decided to take matters into their own, well, hands.

The Junior League of Lynchburg created “Mask-Her-Aid,” a project to sew masks for Centra. Existing sewing groups such as Patches ‘n Pieces Quilt Club and the Seven Hills Quilt Guild also jumped in to help.

Throughout the region, other women formed groups of their own. Emily Harris said friends at Blue Ridge Community Church called area hospitals to see if they would want cloth masks made by volunteers. The answer was a resounding, “Yes!” After receiving an “influx of requests” to donate masks, Centra Health said on Facebook that cotton masks would be used by patients and visitors upon entry in low-risk areas or used for covering coughs and preventing someone from touching their face.

Harris, a hair stylist and makeup artist, was unable to work because of the pandemic. With both a sister and a brother-in-law who are doctors, as well as friends who are nurses, she felt especially compelled to do something. “It makes me feel better to be of service,” she said. “It makes me feel helpful and hopeful.” Harris, who used to make designer bathing suits, had plenty of elastic on hand so she got busy, along with nine others on their sewing team.

In early April, about a week after getting a call from a family that works at Lynchburg General Hospital, nonprofit Vector Space organized an effort to create 3D-printed face shields for nurses in the non-COVID intensive care unit. After delivering 28 face shields to the hospital, Vector Space also started conversations with local anesthesiologists about prototyping ventilator parts and intubation boxes.

“We are so grateful for those that have stepped up to offer help with this project. Individuals and organizations have volunteered time and money, fired up their 3D printers and sewing machines, and sourced all kinds of materials to contribute to the cause of getting personal protective equipment and other needs to our medical community,” said Elise Spontarelli, co-founder of Vector Space. 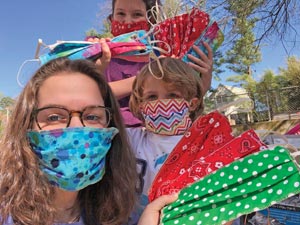 Price Blair, a professor of physical therapy at the University of Lynchburg, learned that Centra needed glassware and alcohol for making hand sanitizer. Lab instructors Desi Justice and Steve Burris teamed up with mathematics professor Mike Coco to pull the supplies together from the university’s labs.

Randolph College also put some unused personal protective equipment to good use by donating items such as gloves, disposable lab goats, isolation masks and protective masks to Centra Health. “Our healthcare workers are on the frontlines and shouldn’t have to worry about their safety,” said Bradley W. Bateman, Randolph’s president.

Liberty University’s respiratory therapy program, which launched in 2019, loaned two mechanical ventilators to Centra Health for use at Lynchburg General Hospital. Dr. Brian Walsh, the program’s director, and his staff also provided online training to area medical personnel on how to operate ventilators.

Other notable donations to Centra Health include 3,700 masks and 100 hazmat suits from the Southern Baptist Convention of Virginia. The Centra Foundation released funding to purchase six new ventilators and five portable x-ray machines as well as conduct a public health campaign about COVID-19 for the region.

“I was honored to have been able to volunteer and take food out to the students of Lynchburg,” said Karl Loos, representative for the Lynchburg Educators Association. “Our food service colleagues are amazing. Everything was safely and perfectly prepared. Our bus drivers are outstanding ambassadors for LCS, as they spoke to every student and parent and represented us so well. Lynchburg should be proud.” 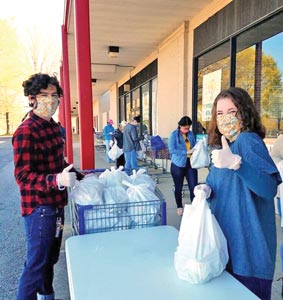 Many area soup kitchens and food banks made sure individuals and families kept eating as well. Lynchburg Daily Bread started serving to-go meals instead of a sit-down meal. “We are the busiest we’ve been in six years,” said Tracey Dixon, executive director. “We have lots of new faces every day.”

The Daily Bread typically feeds 80 to 130 people a day, but were averaging 175 a day by late March. And while fewer restaurants were open to contribute donations, lots of individuals, businesses and churches stepped up. One man dropped off 10 hams, for example. “It’s been amazing,” Dixon said. “This community really is stellar.” 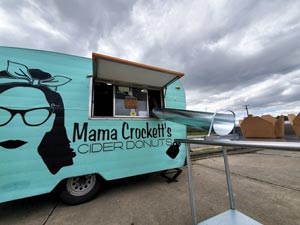 Many customers were making a point of getting takeout from their favorite restaurants to help them stay open, while some restaurants changed their business model more significantly. “I was stressing really bad and my husband said we’ve got to try and think of something different,” said Adi McCauley, co-owner of Magnolia Foods.

So they turned her restaurant into a small grocery store, providing juice, milk, fresh produce, bread, and chips instead of pre-made salads and meals. Waterstone Pizza unveiled a similar idea inside their Jefferson Street restaurant, selling items that might not be found in local stores such as bread and toilet paper.

Mama Crocket’s Cider Donuts food truck began taking orders online, preparing the donuts, and then sliding them through a shoot to protect both their workers and their customers.

Myke Barron, one of the new owners of White Hart Café, has been continuing to provide curbside carryout to his customers, but has found another reason to work during this crisis. “What we’ve latched onto is a community kitchen,” he said.

Partnering with LOJ Ministries, a local nonprofit, and local churches, White Hart is preparing hot meals to be distributed to folks in need. For example, The Ramp Church has a relationship with James Crossing, so White Hart cooks and Ramp members deliver.

“We are building community and relationships with people, even if six feet away,” Barron said. “People are scared and isolated. Isolation is not what we’re built for. …We need to get the ‘why’ that we can all latch on to so we can come out stronger on the other side.”

Government policymakers pitched in to help businesses and individuals stay afloat. Lynchburg delayed business license tax payments, waived late fees on water, and promised not to cut water off to those who couldn’t pay. The Greater Lynchburg Transit Authority suspended fare collection to protect drivers and help people get to work, grocery stores, and essential services.

Local schools—both public and private—quickly switched gears to map out online education plans for the rest of the school year. “It’s our intention for students to be better prepared when schools resume,” Dr. Tommy Coleman, LCS Director of Curriculum and Instruction, said in an online message in early April. LCS school administrators also addressed that virtual learning opportunities were created with an understanding that most parents are not teachers.

Local organizations also were fast on their feet to provide ways for residents to stay connected. A few examples are:

More than 1,000 people joined the live Facebook page hosted by the YMCA of Central Virginia to enjoy programs about exercise, crafts, cooking and more. The Lynchburg Regional Business Alliance started hosting Wednesdays@One, a webinar series to support local businesses. The Academy at Home Series, hosted by the Academy Center of the Arts, features live-streamed performances, tutorials and living room concerts from area performers. 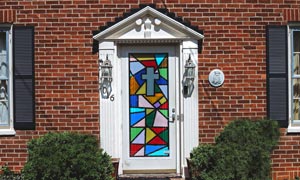 All of the extra time at home together helped families unite in creative ways, including artistically. Here, siblings Bobby Vinson and Rebecca Spitzer used painter’s tape to section off the glass on their front door. Then, they painted the shapes different colors, creating a beautiful stained glass effect.