After 5 p.m. on weekdays in September, the hallway outside of Lynchburg Hillcats President and General Manager Chris Jones’ office is transformed into an impromptu dance studio.

“All right, let’s try it with the kick this time,” Anna Jones, Chris’ wife, tells her husband.

“You just have to kneel down so I can try to get my leg over you.”

“One second,” Chris says as he grabs a spare mascot head and sets it on the floor. “Try it with that first… just in case.” 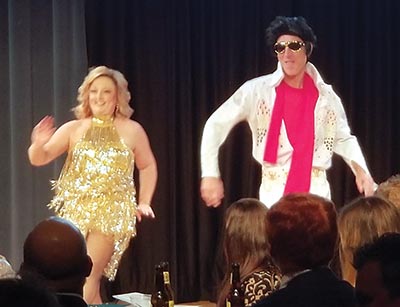 Chris and Anna Jones (who works at HumanKind) are one of 10 couples that are competing in this year’s Dancing with the Lynchburg Stars event on Nov. 23. It’s the largest annual fundraiser for Big Brothers Big Sisters of Central Virginia.

In its sixth year, the event has seen a variety of community celebrities compete. From the mayor to local CEOs, BBBSCVA director of special events and marketing Dawn Blankinship puts a lot of thought into whom she asks to participate.

“The whole purpose of the event is to bring awareness to what we do and show what kind of impact our mentors have on the children we serve,” Blankinship said.

When the Joneses were asked to dance in this year’s competition, they weren’t sure what to think.

“We were at a cocktail party and we had a couple drinks in our system,” Chris said jokingly.

But both agreed they couldn’t say no to such a good cause—even though they don’t have any dance experience.

Blankinship says she tries to have a good mix of experienced and novice dancers. This year, there will be three trophies: the Peoples’ Choice for the couple who wins the most public votes and two Judge’s Choice awards. One for the best couple with a professional partner and another for couples with no dance experience. Blankinship said this helps keep it fair.

“I had one woman compete a few years back who had practiced with the Houston Ballet,” she explained.

Blankinship also puts a lot of thought into the coaches she pairs with each couple. She hosts a meet-and-greet in July to get them acquainted.

“Some couples are ready to start practicing right then and there,” Blankinship said. “Others just wait until September. It really depends on how competitive our couples get. That’s what determines how often they are practicing leading up to the big night. Most practice at least once a week and then begin to step it up the week before.”

The Joneses were paired with last year’s winner, Meredith Wormser, a competitive dancer. Since this year’s theme is “New York, New York,” they decided to pay homage to Chris’ baseball roots by dancing to the New York Yankees’ theme song, “Here Come the Yankees,” and a quick disco number.

On their first night of practice, the three decided to focus on the movement without the music. And for two people without dance experience, the routine is ambitious. There are a lot of kicks, twirls, and a lift or two. But Wormser is convinced they can do it, especially after Anna keeps nailing the kicks and pivots thanks to her cheerleading background.

“I am a little overwhelmed though,” Chris said. “We’re only 10 seconds into the routine and we’re practicing without the music. Besides, we’re both working through previous injuries so I’m not sure how it’s going to work. … I just want to get through it and raise a lot of money [for Big Brothers
Big Sisters].”

A few weeks later though, their confidence has grown and their routine has improved, especially the timing, which can be one of toughest things for beginner dancers to master.

“You can dance all day long to a song, but if you aren’t keeping up with the rhythm, you’re going to lose your place and you’re going to start missing moves,” Wormser said.

She chalks up the improvement up to extra home practices.

“We practice for maybe an hour a week,” she said. “But then they go home and work through things. When they don’t understand it, they come to practice ready with questions.”

Chris has also been practicing solo. Anna said he’s admitted to shutting his office door from time to time to sneak in a few moves.

“We’re really having a lot of fun with it,” Anna said. “I don’t know why but I thought there would be more tension. I was afraid we’d get impatient with one another.”

By week three, they have another set of critics to impress besides Wormser—their kids, who stopped in to watch their practice session.

“I think they loved it and were really proud of us,” Anna said.

“Yeah, they kept telling us that we looked so happy,” Chris added. “To be honest, I was more nervous about performing in front of the kids more than anyone else. I mean, we have a teenager and they don’t hold back.”

“On the first night, they were so serious and not looking at one another,” she said. “Now they’re adding in little facial expressions, looking at each other,
and at the audience. It’s helped their routine tremendously.”

“You’re taking people who have never danced before and making them dancers—good ones,” she added.

“It’s an accomplishment to move like that and still be smiling at the end of it.”

By the beginning of October, Chris is still smiling but just barely, after rupturing his bicep tendon.

“The doctor is pretty convinced I did it the first night of practice,” Chris said. “But rather than just wait it out, I’m going to go ahead and do the surgery to fix it now.”

Despite the major setback, Chris and Anna decided to not pull out of the performance.

“The doctor doesn’t think it will hinder anything,” Chris said. “And the show must go on.”

Anna and Chris have chosen, through all of the ups and downs of their dance journey, not to worry too much about themselves—from what they look like
to how high they kick their legs.

Their focus is to help a local nonprofit continue thriving.

“Big Brothers Big Sisters is such a great organization,” Anna said. “It’s an outlet where kids in our community get the support they need. It’s an important cause.”

Cheer Them On!
November 23, 2019
7-11pm
Academy Center of the Arts Warehouse Theatre
www.bigcva.org