A hiss of steam, and the dance begins. Steady hands raise a small, metal pitcher near a steaming cup of espresso. Blink and you might miss the delicate movements—all in the wrist—as the creamy stream is pushed under the dark liquid, then, as the pitcher draws back, a few gentle wiggles precede a steady whip, following through, turning a roasted beverage into a work of art.

People love their caffeine, but today’s coffee shops offer much more than a mere fix. Increasingly, cafés have become artistic hubs for the community (Lynchburg has no shortage of “it” joints serving up some mean java). Of course, the coffee has to be good. But customers also want an experience, something “snapworthy” to share with their digital community. 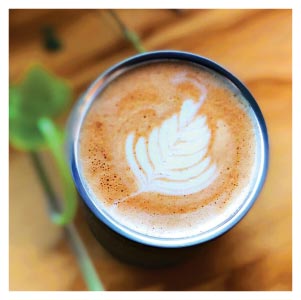 “I would say, especially in coffee, presentation is important just because it is a science and an artform combined,” Becca Laughlin, a barista at Third Wave Coffee, said. “If you go somewhere and you see latte art … it is a good sign that the person making your drink cares, or at least to some degree knows what they are doing.

“Customers, they love [latte art],” she continued. “Even if I pour something and I am like, ‘Oh man, that is terrible,’ people get so excited. They are like, ‘That is so cute, oh my gosh.’”

Golf Park Coffee Manager Haylynn Gaunt said that as Lynchburg’s scene is growing, so is the expectation that comes with personality-driven businesses.

“When I came to work in Lynchburg, people were surprised when I would hand them a latte with something pretty in it,” she said. “When I was introduced to coffee, it was mostly in bigger cities [like Baltimore, New York, and Washington, D.C.], so every barista is pouring good latte art consistently. I just came to expect that.”

With the right equipment, and practice, adding that artistic flair atop a homemade drink is possible. 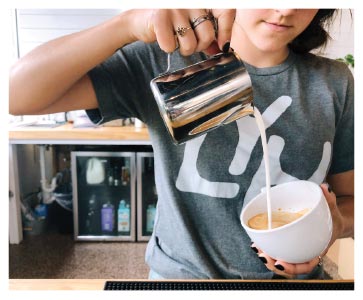 Haylynn Gaunt, manager at Golf Park Coffee on Bedford Avenue, has been creating latte art for a little over two years.

“For the most part, anyone can do it; you don’t have to have this special talent or necessarily be good at art to be good at it,” Gaunt said. “It is a lot of attention to detail. You have to be paying attention to the point that [during]each pour you do you can adjust yourself.”

“You want to be relaxed,” Laughlin added.

“If you are tense, it is going to make it a lot more difficult. A lot of it is muscle memory and just learning what that feels like. You can practice pouring with water with the pitcher in the sink.”

To create art with a latte or cappuccino (the difference being the amount of milk; lattes have more), one needs to be able to pull a shot of espresso and steam milk properly. Alternative milks tend to not pour as well as whole milk.

“It’s the fat content that makes a big difference in the milk,” Laughlin said. “The fat percentage in whole milk seems to work the best. It is possible with alternative milks, it’s just much, much, much, more difficult.”

Both experts said to get a really great drink with really great art, it’s best to invest in your equipment. As it relates to the espresso, a fresh shot is all you’ll need, but it probably won’t taste as good from a low-end machine.

To get started, Gaunt explained: “A big part of it is having a good foundation—hot espresso with that crema on top. The crema, the foam on top of the espresso when you pull it, is what allows you to sink the milk underneath and give that contrast as you pour.”

From there, it’s all about getting the mechanics of pouring down. And having a good pitcher will make all the difference. Pitchers vary in the amount they hold and how wide the spouts are. Baristas differ in their preferences, but typically a narrower spout is better when pouring less milk, such as for a cappuccino.

“When you pour, it is different between the height, the flow of how you are pouring,” Gaunt explained. “You start up really high so that the milk is a thinner stream and sinks underneath the crema, so you are hiding it but it is keeping the same color while also diluting the espresso. Then, it will raise up as you pour more in and then you can actually do the art.”

Holding the cup in one hand, aim the pitcher for the deepest part, at first.

“After you kind of create a good base,” Laughlin said, “swirl it around to make sure it is all even. Once you are ready to start pouring the design, you bring the pitcher down closer to the espresso. Then, it is this very delicate—very small movements. You would kind of start with the pitcher close to the milk and it is kind of a push, depending on the type of design you are making.”

The most basic design is a monk’s head, a circle. If you pull through you get a heart.

For a rosetta, another basic design, Laughlin explained: “You would start with a push and then a very, very light wiggle. It is not aggressive. It is not your whole arm. It’s all in the wrist. Little wiggle and then pulling back at the same time.

And then when you get to the end you would hold it and then pull it up a little more. That is what creates the heart on the top. And then it is a pull through, evenly.

“Tulips are layers,” she added, “so you would push-push-push, so you are pausing instead of pulling through.”

Bolder designs often come from combining mechanics of others.

“You are trying new movements but they are all building on those foundations,” Laughlin said. Seeing those designs on top of one’s drink adds more than a layer of cream; it adds a flair that invites appreciation.

“If you pour latte art and it isn’t great, it is going to taste the same as if you were pouring it pretty,” Gaunt said.

“Art kind of adds a touch and makes people remember it more. It’s marketing, really. For the coffee industry presentation is important. People want to take photos of it and get more excited about it.”