Change has come to Shoemakers American Grille, an upscale culinary delight in downtown Lynchburg that serves as the primary dining spot for the Craddock Terry

Change has come to Shoemakers American Grille, an upscale culinary delight in downtown Lynchburg that serves as the primary dining spot for the Craddock Terry Hotel. It’s also one of Trip Advisor’s “Top Five Restaurants” to visit in Lynchburg.

“It has more of an Italian steakhouse feel,” says chef Jason Arbusto, who took a new position early this year as culinary director of the Bluffwalk Center, which overlooks the James River from Commerce Street. A level below on Jefferson, the complex also includes Waterstone Pizza. 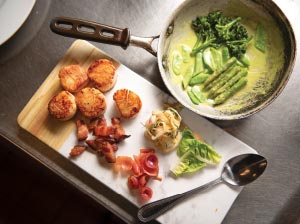 Arbusto’s experience in Europe heavily influences his food choices. His impressive resume includes study at the Culinary Institute of America in New York City, along with eight years of work in France and a stint in Monaco for world-renowned chef and restaurateur Alain Ducasse. By age 26, he was the chef of a two-star Michelin restaurant in France.

Arbusto has enhanced the choices at Shoemakers by offering a rich menu including fried calamari and seared scallops for appetizers and 90-day dry-aged New York strip and blackened salmon with a Mediterranean-style sauce among the entrees. The restaurant extrudes its own pasta and uses French-style butcher’s cut steaks.
Another big change at Shoemakers is the wine list, which Arbusto said had remained the same since the restaurant opened in 2007. He has also added new cocktails. Four people could easily share an enormous piece of chocolate blackout cake or Italian cheesecake for dessert.

To keep returning customers happy, Arbusto was careful to retain some of Shoemakers’ signature classics, including its seafood chowder and crab cakes.

The chef grew up in a “foodie” family in Cape Cod, Massachusetts, but spent his high school years at Virginia Episcopal School. He returned to the Hill City three years ago after he had had enough of big restaurants and big cities, including San Francisco and Las Vegas.

For his first three years here, he became well known for fine catering, pop-up dinners, and opening his own restaurant, Daughters & Sons Pizza on Fifth Street, which his wife helps operate. 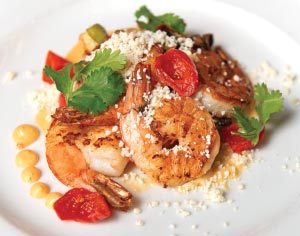 When the opportunity came to expand the vision at Bluffwalk Center, he was primed for the challenge. The whole complex provides diners and visitors with a combination of luxury and history by retaining the theme of the shoe factory housed on Commerce Street in the early 1900s. At the time, Craddock-Terry Shoe Co. was the fifth largest shoe manufacturer in the world.

A large red high-heeled shoe hangs on either side of the hotel.

At 39, Arbusto plans to ramp up the Craddock Terry Catering business and oversee the creation of a new beer garden next to Waterstone Pizza, featuring 16 beers on tap. The interior space will be small, with perhaps 12 to 14 seats, while a heated tent will be able to hold 200 to 250 people, he said. Arbusto envisions serving small plates, tapas, burgers, bratwurst, pretzels, and sausages, in keeping with the German beer garden theme.

Plans are also underway for a smaller roof-top venue, as well as adding three new hotel rooms and expanding the third-floor kitchen for banquets.

At Waterstone, where the line is often long on weekends, diners can enjoy fire-roasted pizza, salads, pasta, and sandwiches, along with rotating taps of Virginia beers. Arbusto has already freshened up Waterstone’s menu, while staying true to its core.

“In general, I want a more local feel for everything,” he said. That means offering as much locally sourced food and drink as possible, as well as displaying local art and hosting community events.