Since purchasing The Farm Basket last summer, Alex Wood and her husband, Sackett, have made a few changes to the beloved Langhorne Road gift shop and café—but to the delight of many customers, the pimento cheese remains the same.

Wood closed the shop for a couple of months to make way for interior and exterior renovations before reopening last October 1.

The Woods purchased the property from Rie and Eddie Godsey and their dining and catering company, Meriwether Godsey. They are the third owners in the shop’s 57-year history.

Wood was working doing interior design—mainly residential—but said she always wanted to own her own home décor shop with a mix of old and new items.

“The previous owners of the Farm Basket were looking to sell, and they wanted the business to continue running similarly but not exactly the same,” she said. “It’s such a historical landmark in Lynchburg, and I grew up coming here. The owners approached us and asked if we would be interested, and I was so excited before I even really thought it through.”

Wood said owning the shop is a more extensive endeavor than she had originally envisioned.

“I knew there was a café and I had eaten here many times, but the restaurant is much more of a daily demand than I initially realized,” she remarked.

As such, Wood immediately hired a manager for the café and said that was the best thing she could have done.

The previous owners sold pretty much all of the inventory before Wood took over, leaving a mostly empty slate for her to work with.

First, she had to learn quickly about the timing and quantity of ordering inventory.

“I went to market in July, which was critical,” she noted. “We got all the new inventory, but inventory is hard to come by right now and it was late. Usually you place Christmas orders in January and we didn’t do it until July. I didn’t know how silly I was to think that.

I didn’t even have it on my schedule on the calendar.”

She also learned the vast importance of certain inventory. She looked around at what was working in the store and what wasn’t necessarily flying off the shelves.

“I initially thought, ‘Wow, there’s not enough room for baby and dog [items],’ and it turns out those are major gifts and are an important part of the business,” she said. “Those things didn’t seem important to me at first. I had to kind of get in there and figure that out.”

Thankfully, most of the staff stayed on and helped guide Wood in those first few months. 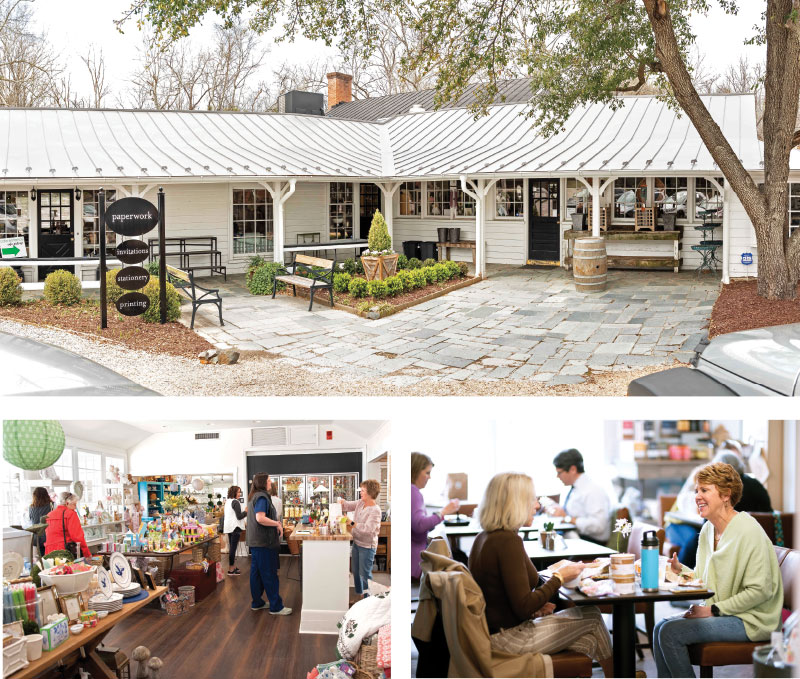 She also hired some new employees who had been working in retail stores that closed due to COVID-19.

“I feel like I nailed the whole hiring part,” she said. “Everybody’s been so good.”

Under Wood’s ownership, three local businesses have found a secondary home at The Farm Basket.

Golf Park Coffee opened another location in the shop, Thistle Ridge Farm will sell vegetables out of the gazebo in the parking lot during the warmer months, and Sackett Wood will bring in some pieces of furniture, bags, and accessories for the front retail space from his employer, leather goods company Moore & Giles.

Plans are in place to repave the parking lot this summer. Once that project is complete, electricity and water will be installed in the gazebo.

New jewelry lines have also been introduced along with a small capsule line of clothing. Wood said the clothing selection will be highly specialized because those sales are pretty narrow in the shop, which has limited space.

The café keeps The Farm Basket steady, which comes as no surprise. Customers continue coming back for not only the pimento cheese, chicken salad, and various sandwiches and soups, but also for the tranquil backdrop of the Blackwater Creek in the shop’s backyard, where picnic tables adorn the lawn.

“It’s always been a great café and there’s nothing like the setting and nothing like sitting by the river on a beautiful day,” noted Wood. “I think our food has gotten even better, though, and we have some of the best sandwiches in Lynchburg.”

She hopes that with the help of a newly launched website, The Farm Basket will reach people from all over the country and will be the place shoppers go for that perfect piece for their home or for their wedding registries.

“I’d like to be more of a destination for people to just come in and look for their own home and a really great gift,” Wood said. “I do think we’ve really carefully curated what we have here and I think our offerings are some of the best. You don’t need to go to Charlottesville to get a great gift.”

She is working on bringing in inventory that can only be found at the shop, such as Supergoop, a skincare and sunscreen line.

“I’m hoping to bring in more lines like that that aren’t found anywhere else in Lynchburg,” she remarked.

At the end of the day, Wood wants the shop to evolve and add fresh inventory while also continuing to offer tried-and-true products.

“I think if people haven’t tried The Farm Basket in a while or they don’t know what’s back there, they should just stop in and just check it out because it’s pretty special,” she said.