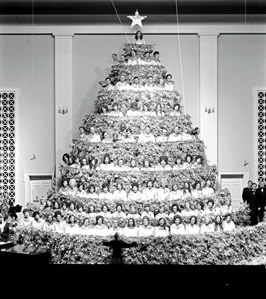 In today’s age, you’re probably in one of two camps: jamming to Christmas music before Thanksgiving or strongly believing that those jolly tunes should only be played after Turkey Day.

Well, at Thomas Road Baptist Church there’s a third option: Christmas is an all-year production, at least for the Creative Team.

For the last several months, the church has been gearing up for the 50th anniversary of the Virginia Christmas Spectacular, which brings in thousands of guests from all over the area to get into the holiday spirit.

“The story goes that Dr. Falwell saw a church in California do a singing Christmas tree and he decided that he wanted [Thomas Road] to do something similar,” says Adam Lancaster, Chief Creative Officer at TRBC. “That was back in the ’70s. The Living Christmas Tree part was comprised of actual evergreen that they would spend weeks stringing together. They had to make sure it didn’t dry out between set-up and the end of performances.” 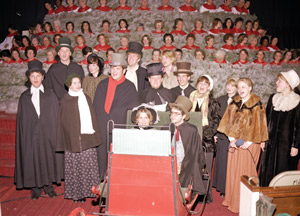 Since then, the show has become a staple of the Lynchburg area. In the early years, Lancaster says the production would run for two weekends with multiple performances in the original Thomas Road location. But after their move to Candlers Mountain in 2006, the size of the audience grew.

“We’re bringing back the [living]tree,” Lancaster says, though it won’t be made from real evergreen this time. “We began setting it up and pulling it out of storage mid-October.” 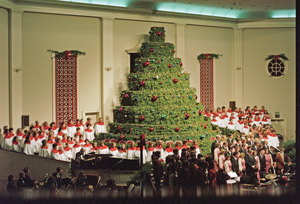 The tree isn’t the only thing the Virginia Christmas Spectacular is known for. Each year, the TRBC team brings a little Broadway to Lynchburg with an original production that is written by a creative team under the direction of Scott Bullman, executive producer—but it still includes classic Christmas songs.

It wasn’t always a high-tech production. Over the years, the technology and scale has evolved.

For one, the tree, which now has hundreds of thousands of lights, was originally operated manually. Behind the scenes, someone was in charge of flipping giant light switches in sync with the music.

“That was a big deal back in the day,” Lancaster jokes.

But the technology quickly evolved thanks to Jon Daggett, who began getting involved in the early ’90s. 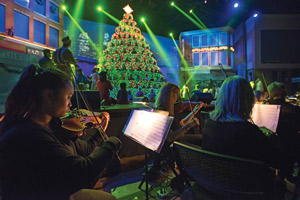 “There was a couple by the name of Rich and Kathy who oversaw the lights,” Daggett says. “They were professors at Liberty and, along with their students, would program the PC and light boards to make sure the tree was syncing up to the music.”

A musician, Daggett had an idea to create his own system. Not for the Virginia Christmas Spectacular, though, but for a holiday party they hosted. In his basement, he composed his own outdoor lighting system that he planned to show off to guests.

It was an accidental hit. Soon, the Daggetts found themselves on the local news and people flocking from all over to check out their house.

“Nowadays, it’s a common thing. People do it on their houses all the time,” Daggett says. “But this was the ’90s, where it wasn’t so common.”

This all led to Daggett being nominated to help design a system for the iconic tree at TRBC.

“I knew nothing about lighting when I started,” he says.

Fast forwarding to present day, Daggett has worked with other churches around the country to create their own lighting systems for Christmas productions. He and his wife even own their own custom light and event company in Lynchburg.

Lancaster says everyone involved with the production sees it as not only a “spectacular” show, but a way to reach out to the greater Lynchburg community. 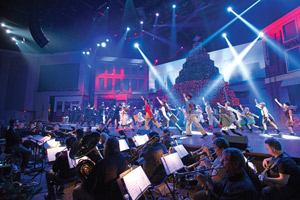 “This has always been a unique opportunity for a city our scale,” Lancaster says. “There are so many people who have been involved—some as far back as the ’80s. Our volunteers get such joy contributing to something like this.”

Approximately 400 people give their time to the production each year—and Don Brooks is one of those long-time volunteers. Since 1983, Brooks has served in various roles from writing to acting to directing.

“I was just in the choir [to start]in the tree,” he says. “I was in the second row from the top where it was hot, and the lights would get you. I did that for a few years, but then I started getting involved with theatre at Liberty and that’s when they started doing the drama portion of it.”

Brooks says after that, he continued to audition and even got his family involved.

But participating in the Virginia Christmas Spectacular is more than just another acting role for Brooks—it’s a ministry.

“Christmas is a time that really magnifies what makes you happy or if you’re in a bad spot, that gets magnified as well,” he says. “I like to do a Christmas program that speaks to where people are at. This time, we’re dealing with COVID-19, and hurt and pain. We all have a story.”

The Virginia Christmas Spectacular is a way to bring hope, says Brooks. He remembers one year where the story portion focused on infidelity. Brooks played the unfaithful husband.

“That’s a hard subject to do when you’re trying to celebrate Rudolph,” he says. “We had several people that came up to me after the show and said, ‘Hey, I saw you in the show and wanted to let you know what you guys were talking about in that storyline is exactly where we’re at.’”

Brooks says a couple even said they came to the show knowing it was the last thing they’d do as a family before heading to divorce court. They told Brooks they had decided to focus on counseling to try to save their marriage.

“We want you to walk away and realize there is hope,” Brooks says.