How often do you walk to the store, to your child’s school, or to work? Maybe these places are too far from where you live. Or—maybe there really isn’t a safe route to get you there.

According to Anne Nygaard, a planner in Lynchburg’s office of community development, many communities used to be a lot more walkable. In fact, walking to school or to the store was common in the mid-20th century. “But in the ’50s and ’60s we sort of stopped building sidewalks and started prioritizing the car over multi-modal transit. People returned from war, got their car and their single-family house out in the suburbs. This was a nationwide trend,” she explains.

Thankfully, that trend is shifting—and we are seeing walkability become a priority once again across Central Virginia.

In Bedford, the Central Virginia Planning District Commission is in the process of preparing the town’s “Bike|Walk Plan” in an effort to help people connect to and through the community and to promote a healthy and active lifestyle. Mary Zirkle, the town’s economic development coordinator, proposed the plan to the CVPDC in spring 2018, and they agreed to help make it a reality. “This plan didn’t intend to reinvent a wheel but to bring together past ideas and current projects with next step ideas,” Zirkle says.

“It allowed us to look at what was suggested and completed in the past and pick up from other plans as well as ideas from new public input.”

A public open house held in late 2018 provided valuable insight in terms of Bedford citizens’ specific needs and wants. “One of the most important aspects of the public meeting was having people draw where they currently walk or bike around and out of town,” Zirkle notes. “It was very illustrative to have them show us how they use the public space now and where they have issues or concerns.”

Additionally, a survey made available to the public for two months gleaned detailed and helpful results. “Simple things like the condition of sidewalks, the lack of crosswalks, and the limited number of bike racks were brought up. The need for a bus was also mentioned several times,” says Zirkle. 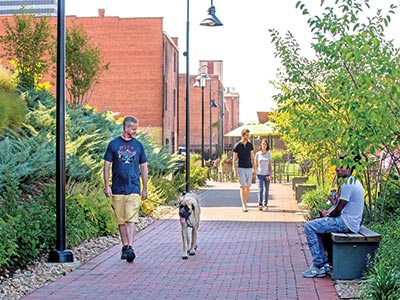 The survey also indicated that Bedford’s famous walking “Loop” could use some updates and gave citizens the opportunity to rank five major projects in order of importance.

In addition to these five projects, Zirkle says there are a few basic initiatives that should be addressed promptly such as repairing current sidewalks and installing new sidewalks and bike lanes throughout town.

While improved sidewalks and other pedestrian updates were ignored for decades in Lynchburg due to a suburban zoning ordinance that was adopted in the ’70s, there has been a renewed focus on walkability in the city over the past 20 years. In 2013, the city adopted the “Better Streets Policy” into its comprehensive plan, a move that said city officials were committed to building sidewalks and making other pedestrian and transportation related–improvements. Then in 2016, the city adopted a zoning ordinance update that requires developers to include sidewalks in their plans. “[The ordinance] does not emphasize exactly how the sidewalks will look, but this does address the pure safety aspect of making sure residents can walk in these areas,” says Nygaard. 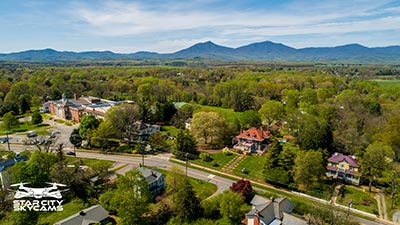 For example, Nygaard mentioned the Wards Road area, which saw its biggest boom of growth in the ’90s. At the time, there were no requirements for any sidewalks. As a result, the city has been working over the past decade to make that area walkable—and safer—with the addition of the pedestrian bridge and connecting sidewalks/paths.

Nygaard says the quality of the walking environment is also a crucial component of their plans—especially when the goal is to change a person’s mindset.

“You have some people who have the choice to drive or walk. How do we get them to choose to walk more?” she asks, explaining that street trees, crosswalks and connectivity to other parts of town make walking more enjoyable and ideal.

Also, the Downtown 2040 master plan released in late 2018 includes a chapter on mobility and calls walking “transportation’s lowest common denominator.” It says with each downtown project, walkability will always be prioritized.

When listing off all of the proven benefits of walkability, Nygaard mentions improvements in safety, the environment, the economy, social equity, and the promotion of a healthy, active lifestyle.

“Just the idea of making sure you have some level of exercise worked into your day.

Also, having places to run and bike, too,” she says.