You’ve most likely spotted the LU on the side of Liberty Mountain, and just above it is perhaps one of Lynchburg’s best kept secrets: the Liberty Mountain Snowflex Centre (LMSC).

Described as a “toothbrush glacier” by Kevin Hoff, Marketing Manager and Assistant Ski and Snowboard Instructor, the LMSC offers skiing and snowboarding year-round on its “synthetic surface that mimics snow.” Thanks to lots of “matting laid down like a thick tooth brush and a misting system [that]keeps it slick” the surface can mimic the slip and grip of skiing or snowboarding on real snow, but, Hoff explains, “When you fall [at Snowflex], you don’t experience as many harsh impacts.”

You should go for the view at least—voted “Best View of the City” for the last few years in Lynchburg Living—but stay for the fun, exercise and family-centric activities. We promise, you’ll be happy you did! 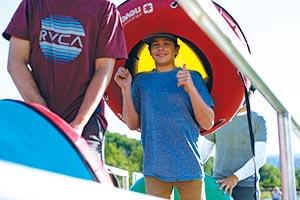 Fun for All Ages

As kids grow older, finding activities for the whole family to enjoy together can be understandably challenging. LMSC offers skiing and snowboarding year-round on two different sized slopes. Plus, to make the experience accessible and fun for all ages, they also have tubing and a large trampoline on-site.

For those new to the mountain, or skiing/snowboarding in general, Hoff strongly recommends purchasing the combo pass; for $25/person, you have access to everything at LMSC including the rental equipment. “Recently we offered a $5 upcharge for a walk-in lesson,” Hoff explains. “The lesson can be up to four people, so all the kids in a family can do it together, then they can do whatever they want for [the remaining time].” Hoff says this is the best way to maximize your time on the mountain. LMSC will start lessons with children as young as three or four if the parents are involved; “the goal there is that they have fun and don’t feel stressed out,” Hoff says. “It helps them to become familiar with the concepts, and you can start to teach them the basics.”

For those not interested in any of the physical activities, they also have a spacious lodge on-site that offers a small snack bar with locally roasted coffee and comfortable seating and viewing areas. “We want the whole family to have a good experience—not just one kid,” Hoff says.

An added benefit to skiing and snowboarding is the physical challenge they offer.

“These are whole body workouts,” Hoff says, “It’s your legs; you’re bending and turning, so it’s a lot of rotational exercise with your core.”

In fact, according to Hoff, the core drives the direction your body will move, so core strength and stability along with balance and coordination turn skiing and snowboarding into quite the exercise experience. These activities will also improve your body awareness (the technical term is “proprioception”); knowing where your body is oriented while doing different movements can be a good mental challenge as well. 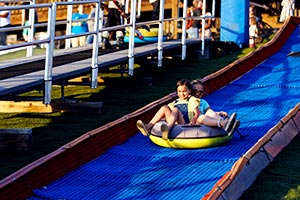 It’s no secret that screens are demanding more time and attention than ever before. Hoff says, “While tubing isn’t physical, it’s just great to get outside in general; kids get too attached to their screens and aren’t outside, but we want to see more outside time.”

Indeed, time outdoors is known to reduce stress and increase one’s sense of well-being. Additionally, Hoff says coaching and teaching kids as they develop new skills gives him a front row seat to their increasing levels of self-confidence. “A lot of kids don’t jive with the whole team sports idea,” Hoff says. “But with skiing and snowboarding, you can be on your own or find a buddy and challenge each other.”

Writing for Psychology Today, Dr. Stephanie A. Sarkis says, “In a [2013] study in the United Kingdom, people that went to green spaces felt more relaxed, had more positive emotions, and [had]improved spiritual wellbeing.” For simply stepping into the great outdoors and appreciating the view, the benefits are hard to beat.

And if you’re simply looking for a picnic site, then take the short drive and grab a seat on your tailgate. “I see people from all walks of life and all ages enjoying the view,” Hoff says. “It’s awesome!”