Is it possible that sometimes a house chooses its owners?

Much like a rare antique sitting boxed up for decades in an attic, or a valuable painting relegated to the back rack at a thrift store, it waits for just the right old soul who will lift it up with a sense of reverence and say, “There you are.” It seems an impossible idea given the recent real estate market, but when you hear the kismet story of Hannah Poucher and Grant Kittrell, it may lead you to wonder if maybe, just maybe, their house chose them.

The Discovery
“We knew the second we looked through the windows that we wanted to live here forever,” Hannah, now 32, said of their love-at-first-home-sighting experience.

It was August 2019, and she and Grant, now 30, were making plans for a wedding and their future together, when something akin to Zillow lightning struck. A little listing with just five vague pictures popped up—a circa 1954 midcentury modern in the middle of Lynchburg. Within the hour, the couple found themselves peering through the windows, unable to believe their own eyes. It was meant for them, they knew it, but they needed to move fast.

“We weren’t pre-qualified, we had never looked at any houses before, we had to Google after we saw this place—’how to get a mortgage’—we didn’t know anything!” Hannah, a military recruiter for Liberty University, said. “But we knew if we didn’t jump at this, we wouldn’t get another shot at something like this in town.”
A bidding war ensued, but the home seemed to intuitively know who it wanted as its next caretaker. The couple closed in November 2019 and made a defining decision in honor of their new-old home.

“We wanted to live in the space for at least a year before doing anything radical,” Hannah explained. “We wanted to understand what it was like to be here as people within a space where it was designed to work like this. So, we decided no big changes for the first year.”

An Intentional Interior
It turns out, there was much the home wanted to teach them. Grant and Hannah took pleasure in learning about its history and thoughtful layout, taking note of each delightful detail, like how the abundant natural light shifted across the open-beamed ceiling throughout the day.

“We both, perhaps in different ways, came to this space with appreciation for art and design,” Grant, a writer, illustrator, and musician who works at Randolph College, said. “The midcentury modern style is very intentional and leans in the direction of sculptural, so there’s not a day that we don’t look around and say, ‘Hey look at that! Isn’t that really amazing?’ So, we are living in this space that we see as a piece of art, and really it is.” 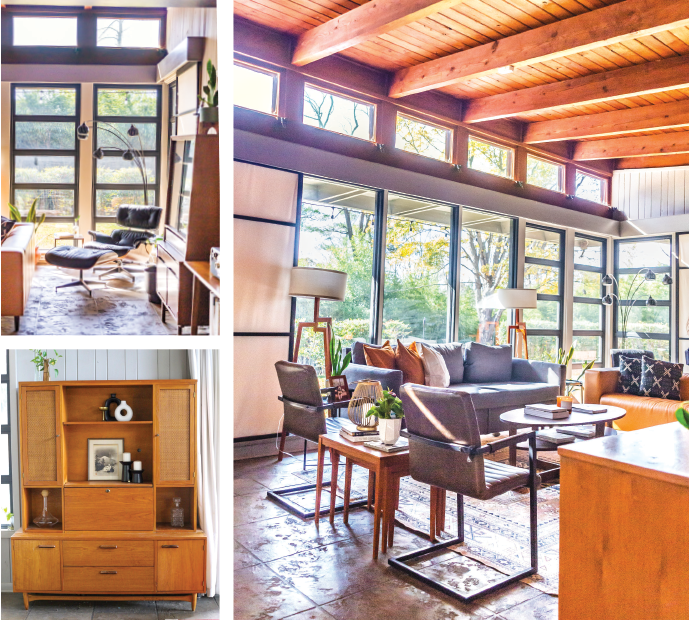 Within that first learning year, they came to understand the unique reason for the way things were designed. Like the greater abundance of windows on one side of the house to allow for passive solar heat. Or the fact that the floors, which look like stone, are in fact stamped concrete designed to hold thermal mass, making what should be a cold underfooting somehow warm and earthy.

The biggest discovery, however, came in the form of a large manila folder filled with the home’s blueprints, original building materials, past pictures, and a booklet of original paint colors from The Frank Lloyd Wright Sierra Sunset Collection.

“When we found that folder, with the Frank Lloyd Wright paint palette, we realized that there was incredible intention behind it,” Hannah said. “So, for example, this color isn’t black, this is the Midnight color from that collection that is part of a larger palette. It was already here. We only painted the kitchen cabinets.”

Furnishings with Soul
While their commitment not to change the home’s interior held strong after moving in, it did need some furnishings. Some true-to-the-era furnishings.

They dove in with both feet and hands.

“Pretty quickly, Hannah became a master of the Facebook Marketplace,” Grant laughed. “She would stay up late at night looking for furniture. So as soon as I got off work, we would take off and go to places we had never seen before, out in the countryside, and pick up an old piece of furniture that someone maybe didn’t really know what they had.”

The hunt for pieces soon evolved into restoration of those finds as needed. Grant and Hannah became quick students of the specific approach to refinishing midcentury pieces.

“We aren’t talking about just sanding and staining, you’re talking about burning through wood veneer if you mess it up and how things aren’t stained, they are toned and sealed and lacquered,” Hannah said. 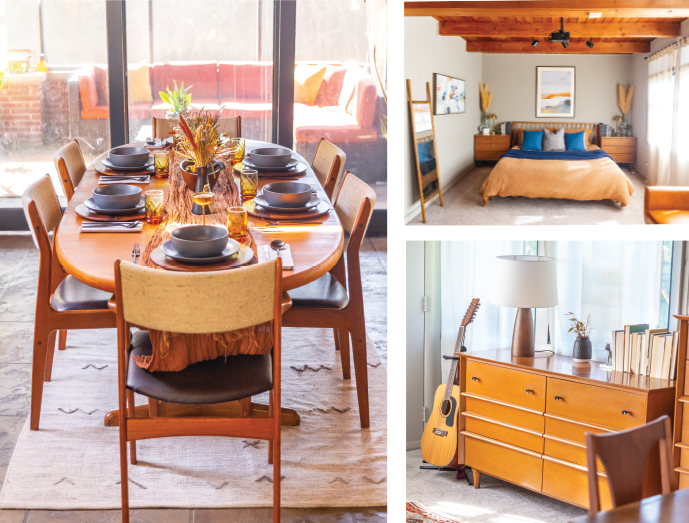 “I think the more work we put into a piece, the more we favor it.”

Her current favorite piece? A hutch from Lane Furniture, whose factory was once headquartered in Altavista. They discovered the piece in Rustburg, and it is now situated proudly in the area that opens from the kitchen into the dining area.

“We got it on Facebook Marketplace and the seller’s mother had bought it originally from Lane. So it’s a Virginia piece and the time period is right,” she recalled.

What you won’t find a lot of on the home’s ever-evolving furniture front are many new items.

Not because they are purists, Hannah explained, but because of what’s available on Marketplace, what’s within their budget, and what they can restore back to life now and perhaps replace later.

“I can probably count on one hand the number of new things that are in this house,” she said. “And while sustainability might not be the first thing we think about, it’s definitely a driving force. I think in terms of a level of purism, that’s what we are working towards.

It feels like such a perfect space, and we want to honor it with things from that time period.”

An Apartment Evolution
Of course, as with most self-imposed rules, there is almost always an exception. For Hannah and Grant’s “no changing the house for a year” rule, that exception came in the form of an efficiency apartment just across the home’s attached breezeway, where they cut their teeth on the basics of home renovation.

“We focused a lot of our initial energy there because it was a smaller space; we weren’t as overwhelmed and we figured we could learn in there and not have to live in it if we made any mistakes,” Hannah said.

While the essential layout existed when the couple bought it, the apartment needed some finishing work. They took to painting the kitchen cabinets the same green as the main home’s kitchen, updated the floors with a light luxury vinyl tile they laid themselves, and furnished the small bedroom, kitchen, and bath with interesting finds, such as a 1965 Sears Roebuck & Co. bar sourced in Roanoke and a white 1930s stove from Farmville. While not decade-specific to the home, Grant said, “when you bring something this old from the 30s, you’re bringing a long history into this space and the possibilities of whatever life it lived before.”

The renovations came with inherent lessons for the couple, and they reflect now that it better prepared them for future renovation jobs still ahead, like their dream of expanding the home’s main kitchen.

“We have learned to work with each other a little better and be patient with each other in different ways we didn’t know at that point,” Grant said. “Coming home each day and laying flooring every day…we learned a lot!”

From the Inside Out
Much is to be made of the home’s interior, and for good reason, but the property’s grounds are stunning in their own right. In fact, it is the marriage of the two, one spilling by design into the other, that creates a zen-like cohesion with nature from nearly every vantage point.

“We both love and appreciate a lush, green space and this has a lot of bamboo, a big maple, and some really intentional plant life,” Hannah said. “So when you’re looking out these windows, the lines are blurred between outside and inside.

It feels like a really natural space and really a sacred space almost.”

The pair have worked diligently to make conscious updates to the home’s exterior, including retrimming the formerly gray windows to a crisp black, something akin to adding eyeliner to an already lovely face. They cut back layers of bamboo and, as a reward, have witnessed more wildlife at play, from a family of foxes to finches taking up residence in one of the many birdhouses Grant made to a shy resident doe the couple affectionately calls “Jean.”

Most warmer nights of the year, you will find Hannah and Grant on their back patio area, nestled in wicker egg chairs, beverage in hand, dreaming into the future about their vision for the space. Their ultimate hope is to continue to collaborate with their cherished home in order to share it with others—an ever-welcoming, one-of-a-kind retreat.

“Mixing the inside and outside is always a goal,” Grant said. “Having a nature trail on the property is a dream, or hosting yoga or meditation classes here, maybe along with some creative writing workshops.

I would also love to make this place more sustainable, perhaps with solar power.”

It is little wonder that whatever the pair chooses to do next will be with great planning and purpose for the home that somehow, some way, chose them. Three years into their adventure, they still wake every morning with a wide-eyed sense of awe for their surroundings.

“I think, ‘How is this even a possibility? How could this even possibly be our home?’” Hannah smiled. “There is a lingering sense of wonder and excitement every day that we are in this space.” 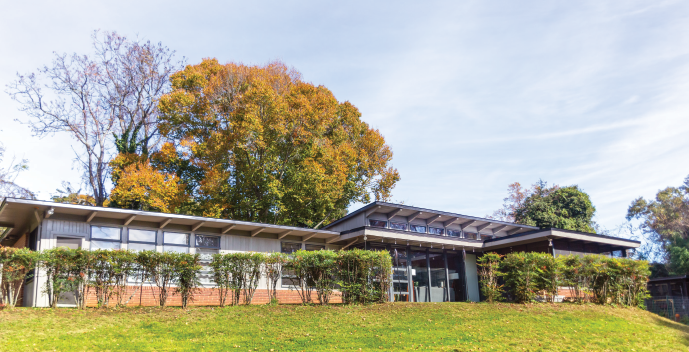 Check out Hannah and Grant’s Instagram page dedicated to the home @clerestorymod. “Clerestory” is the word for windows that are above normal ceiling height
and project into the roofline, which their home boasts in abundance.