Smart phones. Electric cars. Botox. Twenty years ago (remember Y2k?) none of these items were exactly mainstream yet.

Out of them, only one hasn’t really changed much since its inception—and that’s Botox, an injectable, skin-improving drug that can only be administered by a licensed medical professional. What has changed since Botox debuted in 2002 is its range of uses as well as the stigma it carries.

For those unfamiliar with the lingo, Botox differs from filler, which is also used to improve the look of the skin. Botox freezes the muscle to reduce the look of wrinkles, while filler does what its name implies, fills out wrinkles and creates smoother skin.

When it comes to Botox, most patients are looking to erase wrinkles, but according to Craig Petry, M.D., owner of Wyndhurst Medical Aesthetics, it only temporarily binds the neuromuscular junction so the nerve cannot cause a contraction of the muscle. Botox generally lasts about four months and wears off as the muscle regains its function. Dermal filler can last between six months and two years.

Dr. Petry says one of the most important things to consider when it comes to injectables is that experience matters. “Any medical professional with a license can order Botox and, because of such, we often have to correct errors in injection,” he explains. Dr. Petry also has a master’s level training in Botox and fillers. “Be sure that your injector knows facial anatomy and has experience with thousands and thousands of patients because every patient is different and needs Botox in slightly different areas and amounts. A skilled injector is worth the price.”

With all the hype surrounding Botox and dermal filler, Dr. Petry is pleased to see training improve for injectors. Instead of just correcting a fine line, there is now more of an emphasis on fixing the underlying problem. “We see more of filling the cheeks to work against gravity and atrophy whereas before injectors would see lines around the mouth and think, ‘let’s just fill these lines.’ But now training emphasizes that the injectors work up and out with cheeks and then down and in,” he explained.

Fillers can be used in the lips, and small amounts of Botox can correct a lip flip or “gummy smile,” Dr. Petry says, adding that he has also used Botox to correct some minor facial asymmetries such as one brow being higher than the other. 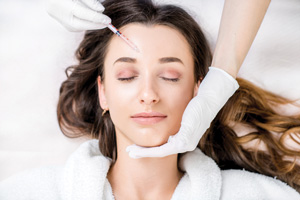 Botox is not just cosmetic but could be therapeutic in some cases. Some people who suffer from chronic migraines are turning to Botox for relief. Botox is injected around pain fibers that are involved in headaches; it blocks the release of chemicals involved in pain transmission. According to the American Migraine Foundation, Botox is only FDA-approved for those with chronic migraines (more than 15 per month).

Botox also could be an option to consider for excessive sweating. In the face, the drug cuts down on the output of the sebaceous gland so people are less oily and sweaty. It is used in the hands and armpits to reduce sweating from a condition called hyperhidrosis.

According to a review in the June issue of Current Sports Medicine Reports, there also is growing evidence that Botox can be an effective treatment for certain sports injuries and chronic pain conditions.

In terms of cosmetic Botox, Dr. Petry says the risks are minimal, but bleeding and bruising are the most common side effects. “In all the years and hundreds of thousands of units of Botox that I’ve injected, I’ve never seen an allergic reaction, infection or any adverse events,” he said. “It is probably one of the safest cosmetic procedures ever invented.”

Another major change in the Botox world—the drug isn’t nearly as taboo as it once was. While the industry is still dominated by women, more and more men are interested in the benefits of Botox. According to the 2018 Plastic Surgery Statistics Report, about half a million men try Botox every year.

Botox Parties are the latest trend. Wyndhurst Medical Aesthetics offers discounted group rates for 8-10 people in their office, meaning you would not be keeping your Botox injection a secret but instead sharing the experience with a few friends. Lynchburg native and life purpose coach Kessley McCormick says when she was beginning her own research on injectables, not many people were talking about it.

Once she began to receive Botox from Dr. Petry, McCormick says she talked about her experience with anyone who was interested, describing the process as liberating and a major confidence boost. “This wasn’t just about vanity,” she said. “This was about doing something for myself no matter what anyone else thought.”

Rachel Dalton comes from a restaurant marketing and management background in Richmond but now is a wife, mother, writer, exercise enthusiast, very amateur chef, traveler, super planner, dog rescuer and lover of all things local to her new hometown of Lynchburg, Virginia.