Everyone is Excited that Tarsha Joyner Decided to Keep Her “Absolutely Fabulous” Bakery in Downtown Lynchburg (Where it Belongs!)
Photos by LaShonda Delivuk 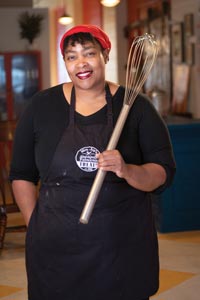 Due to her popularity on the local and national level—including the disappointment when news broke last year that she might close down—you might assume that Tarsha Joyner (aka Mrs. Joy) has been baking delicious treats her whole life.

“The cookies I made for my kids when they were little were a joke,” Tarsha says. “It was like a Christmas tradition to see how screwed up the cookies would be that year.”

So how did she end up running her own bakery and win $10,000 competing on Food Network? It started with a class project at the University of Lynchburg (then Lynchburg College) in 2012.

Tarsha was working as a secretary and raising teenagers when she decided to go back to school. She wanted to be a computer programmer. Classes at Central Virginia Community College led her to Lynchburg College, where she ended up gravitating toward the graphic design program.

For Professor Ursula Bryant’s class, Tarsha had to do branding for a product line from start to finish. She decided to name her fake business Mrs. Joy’s Absolutely Fabulous Treats. Why Mrs. Joy?

“I was getting a brand-new bowling ball at that time,” Tarsha says. “I wanted to get my name inscribed but you could only have six letters. It was either going to be Tar Joy or Mrs. Joy. And that first one just didn’t sound as nice.” 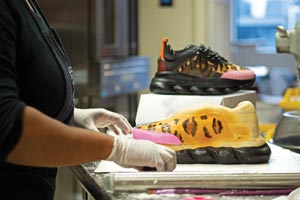 Tarsha decided to go ahead and try to bake something for her business: shortbread. Her son was looking for a summer job, so she made a deal with him. If he sold her shortbread at the Lynchburg Community Market, he could keep half of the money. After her shortbread sold out, she started branching out: cake pops, brownies, donuts and more. She watched videos on YouTube and started practicing recipes.

Then came the decision to open her own store. Tarsha found a spot she liked on Commerce Street, the old Bailey Spencer hardware store. No banks would lend her money to open, but she says Phillip Jamerson, who owned the building, trusted that she would be able to pay for the buildout.

Going on Food Network gave her instant credibility. In 2015, Tarsha found out through a bakery group on Facebook that they were casting for a show called “Christmas Cookie Challenge.” The network flew her out to Los Angeles where she brought her five cookie recipes and competed against more experienced bakers—she beat them all.

“When I did that, it was like I became serious. People took me seriously,” Tarsha says.

She was a hit at Food Network too, invited back to compete in “Dessert Games” in 2017 and “Haunted Gingerbread Showdown” last year. 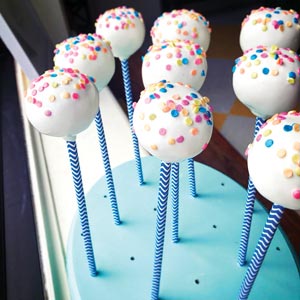 As Tarsha grew Mrs. Joy’s, she learned valuable lessons along the way. She says finding and retaining good employees has been the biggest challenge. Right now, she has a team of six, including two of her daughters. She’s tried to stay away from hiring bakers who might want to put their own spin on her recipes, and she wants people who have basic science and math knowledge. “If you can follow instructions, we’re good. Because I can teach you to do anything,” she says.

The fact that Mrs. Joy’s is still open in Lynchburg is pretty remarkable. Tarsha was all set to close and move her business to Mechanicsville last year to be closer to her oldest daughter and young grandson. Her daughter found her a spot in a shopping center, but the owner abruptly backed out and said she couldn’t have the space.

As recently as last December, she thought she was just going to close the Lynchburg store and take a well-deserved break. Her husband had already gotten a job closer to Mechanicsville and she had a hard time keeping up with the workload. She found one potential group to take over her space on Commerce Street. But then she ran into some issues with them, and on Christmas Eve decided to pull the plug. After two weeks off around the holidays, Mrs. Joy’s opened back up in January.

One of the first things you’ll notice when you walk in the store are the huge cinnamon rolls, which Tarsha says are “as big as your head.” One roll can feed a family of four. Her donuts are very popular as well. If you remember the old Bill’s Pastries shop off of Memorial Avenue, these donuts are the closest you’re going to get. In fact, when Bill’s wife passed away, the family came to Mrs. Joy’s to get donuts for the funeral.

Besides a variety of baked goods, you can get an education at Mrs. Joy’s. She teaches classes all the time on subjects such as cookie decorating. At kids’ birthday parties you can learn not only how to make delicious cookies beautiful, but also the science behind why each ingredient in the cookie is important. Like quilting or knitting, Tarsha hopes baking is a pastime that doesn’t get lost. 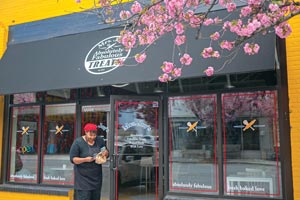 “I feel like we need to make sure that these things are still done and taught to everyone so that they don’t fade away,” she says.

Spend five minutes with Tarsha and you will realize how much passion she has for what she does.

“I’m not afraid of failing. I really have no fear of failure,” she says. “If you know anything about me, I always tell people when they say, ‘I’m afraid to do this or that,’ fear is of the devil. Fear and faith cannot exist in the same space.”

Tarsha has been on quite a journey since growing up in and out of foster homes in Rocky Mount, North Carolina. She didn’t have family recipes or memories of cooking with parents and grandparents.

“They didn’t take that kind of time with us. We didn’t have those opportunities,” she says. “Nobody spent time with us to do anything.”

And she doesn’t forget the people who have helped her along the way. That includes Janet Dunford, one of her professors at CVCC.

“I learned so much from her that was applicable to everything that I do. In art, in baking, in raising my kids. She taught me so much,” Tarsha says. “I don’t think she’ll ever understand the impact that she had on my life.” 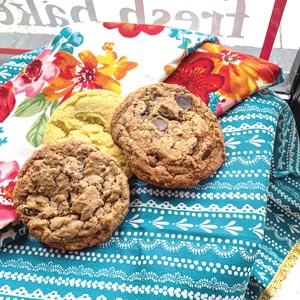 Just like she’s been helped, Tarsha wants to share what she’s learned with anyone who might be in her shoes. One of her best pieces of advice: know your worth. “If you don’t know how much you’re worth, someone else will gladly tell you what you are worth,” she says. “And then you’ll never be worth anything.”

During the Pandemic…
“Some people came into my shop, they didn’t know what they wanted, they didn’t even care… they just wanted to help us out. People bought certificates, food for their neighbors and their friends to support us and I appreciate that more than they will ever know.” – Tarsha Joyner on the widespread support she received during the COVID-19 restrictions