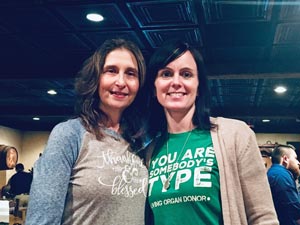 Needed: Type O kidney!” The sign in the rear window of a Ford Escape was clearly a cry for help—but would anyone really be willing to donate a kidney?

These were thoughts going through Forest resident Trina Layne’s mind two years ago as she desperately searched for a donor. Lynchburg station WSET did a story
on her quest to help spread the word.

Trina had been on a kidney transplant list since 2014 and had been on dialysis for two years. Now 51, she had known since her early 20s that she had polycystic kidney disease, a hereditary condition that can render the kidneys useless.

Meanwhile Charlene Morrell had a series of pointed events happening in her life. Charlene, a manager at Genworth, was talking with a new employee, Maysa Hamad, who told her that her cousin needed a kidney.

A few months later her two nieces were spending the night with her and the 6-year-old told her that the liver is the only organ that stays awake. While Charlene told her many organs are always at work, she took the opportunity to tell them everyone has two kidneys.

Her 8-year-old-niece immediately replied, “Then you can give one to somebody else.” Out of the mouth of a babe came an idea that had been percolating in Charlene’s mind.

Two days later, she was scrolling through Facebook and saw Trina’s story on WSET. “It was just such a God thing,” Charlene said. “It was so clearly orchestrated by Him.”

Charlene spoke to her husband Andre, who fully supported her decision to become a donor. She contacted VCU Medical Center, where Trina was a patient, and underwent six months of psychological and medical tests to see if she could become a donor. 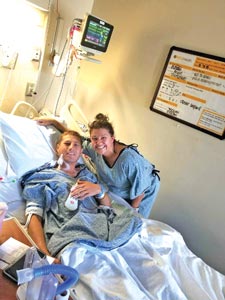 Charlene, now 44, passed the non-smoker and physically fit tests with no problem. A natural athlete who runs the 10-miler, Charlene was not concerned about her physical recovery, but she was still not sure she could donate to Trina. Even with the same type O blood, there were other markers that had to match up.

Trina knew someone had come forward to offer her a kidney, but she had no idea who her potential donor was. About two months after Trina’s testing, Charlene and Trina independently attended a session at VCU about living kidney donation. Charlene introduced herself to Trina, and while at the session, word came to Charlene that she was a match. She says they wept together.

Charlene’s kidney was removed arthroscopically. Two days later she left the hospital and within a week, the pain was gone, and she was back to work. Within three weeks she was working out again. “It was the best thing I’ve ever done,” Charlene said.

Trina’s recovery took a bit longer because she required a nine-inch incision. She was out of work for two and a half months. For her, it was a small price to pay.

She had been doing dialysis at home four days a week for two years, which required a four-hour procedure to clean her blood. She could not move for three hours and sitting was hard, as was sticking herself with two needles. During those years, she still managed to work full time at J. Crew.

The two have become friends and keep in touch regularly. “I don’t even know if I can put into words the amount of gratitude I feel,” Trina said.

Charlene knows what a life-changing event it was for Trina. “Every time she pees, she thinks of me,” she said with a laugh. 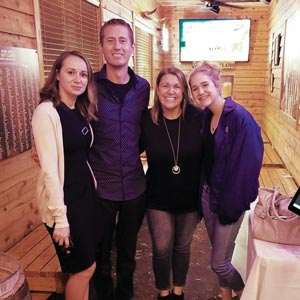 Charlene also served as a role model for others. One of her employees, Jennifer Smith, followed Charlene’s journey and learned about living organ donation. Even more profound was visiting Charlene at VCU the day after her surgery. She arrived just in time to see Charlene walk into Trina’s room for the first time post-surgery. “It was just so touching to see this,” Jennifer said.

She saw how quickly Charlene recovered and had just had a friend in New York be a donor as well. Jennifer decided to become a donor, too. “I couldn’t ignore this voice in my head: maybe this is something you should do.”

On March 19, 2018, soon after Charlene’s donation to Trina, Jennifer called VCU and started the process. She was scheduled for surgery at the end of August, but at the last minute her first match was not able to undergo the procedure.

A couple of days later she was able to give her kidney to a 28-year-old named Andrew, who was beyond desperate. “He’s so young, and he has so much life ahead of him,” Jennifer said. “He was knocking at death’s door.”

The two were such a good match that Andrew is taking reduced anti-rejection medication, and Jennifer hopes that means his new kidney will last longer than the 15 to 20 years most transplants are viable.

Even more amazing was the series of donations that Jennifer triggered. Known as a bridge chain donation, Andrew’s wife donated a kidney to a 65-year-old man, whose daughter, in turn, donated one of her kidneys to another person several months later. (Another unexpected benefit occurred when Jennifer took a work-related trip to India five weeks after her surgery. Her surgeon happened to be in India for a sister-in-law’s wedding, and invited Jennifer to attend.) 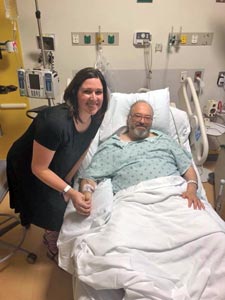 Now 43, Jennifer is a big proponent of living kidney donation. If you don’t have kidney disease in your family and are healthy, you should consider being a donor, she says. “All things considered, it was no big deal,” she said of the surgery and quick recovery.

The story comes full circle back to Maysa Hamad, Charlene’s co-worker whose cousin Jim needed a kidney. Crysti Shirley, yet another friend of Charlene’s who used to work at Genworth, decided to donate to Jim.

She started the process the same day Jennifer did, and ended up being a great match for Jim, who lives in Fairfax. Their surgery was done at Johns Hopkins on July 29, 2018.

While Crysti now works at Standard Insurance in Altavista, she keeps in touch with her friends from Genworth. “We built a lot of friendships at Genworth that will last a lifetime,” she said. 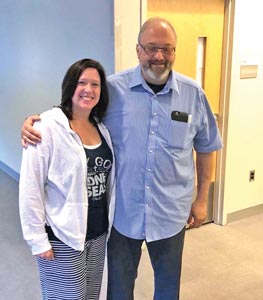 They also sparked a lot of giving. Charlene’s initial gift inspired kidney transplants for four additional people. She is a vocal advocate of not only living donation, but also encourages everyone to be an organ donor in the event of premature death. It’s as simple as checking a box on your driver’s license. If you don’t have a driver’s license, you can still register in person at your local DMV or online at organdonor.gov or donatelife.net.

A faithful member of Blue Ridge Community Church in New London, Charlene said she was never scared by the thought of surgery. “I knew God was asking me to do this,” she said.

All three donors in this story agree. They recently got together with their recipients to celebrate. “It’s a great thing to change someone’s life,” Crysti said.