After more than three decades, the restoration work at Thomas Jefferson’s Poplar Forest is nearly complete.

With restoration beginning in 1989, staff began peeling back the layers of the house, understanding more and more what Jefferson had built.

There were also two big periods of change after Jefferson’s lifetime. The first was a fire in 1845, after which the house was rebuilt as a farmhouse rather than a modern Villa retreat. Then, a century later, the farmhouse was converted into a country house with five bathrooms and a kitchen.

The board put together a professional team including staff and consultants who were restoration architects at Monticello and the University of Virginia, as well as an architectural advisory panel of well-known restoration experts.

“The board members, some of whom were local, always let the professional team determine how the project should be run, which really made it one of the most ideal restorations in the country,” McDonald said. “It could easily have been done wrong, but the attitude was to do it as well as we could.” 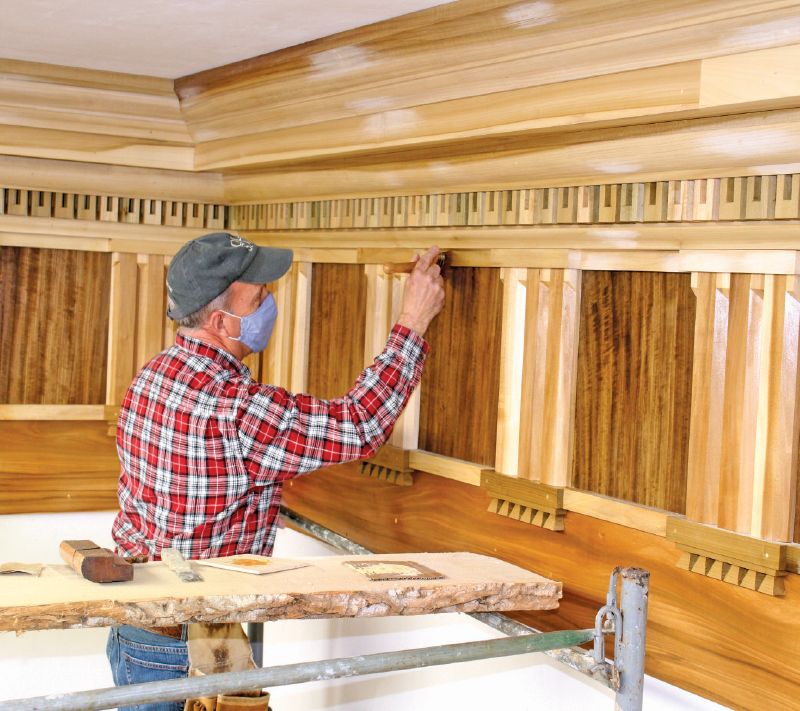 The project has been a long and wonderful journey, McDonald said, adding that visitors from all over the country have come year after year to see the work progress.

“We were open to visitors during all phases of the restoration so they could see what we were discovering, and they were also treated to watching a Jeffersonian process of putting everything back together,” he noted.

All of the interior moldings we created by hand using antique tools and even antique wood from the Poplar Forest property.

“The fact that people could come and see the process so closely has given us a national reputation,” he remarked.

“We tried to make our process exactly the same as Jefferson’s, using the same materials, the same techniques, and the same craftsmanship.” 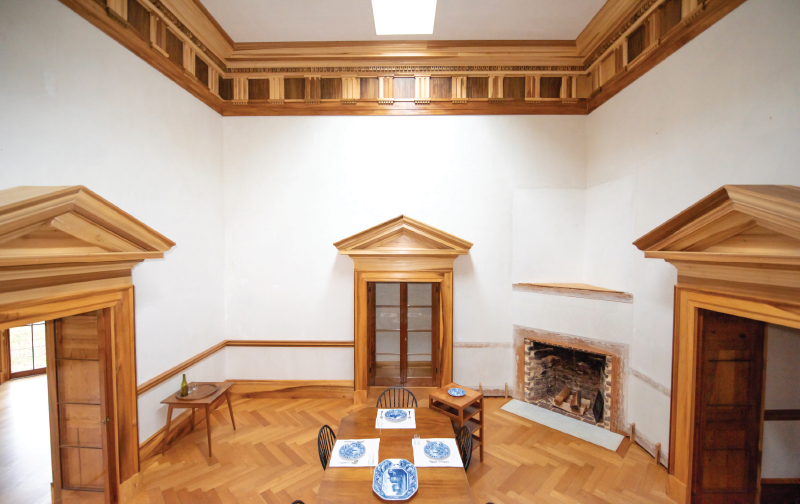 Aside from Monticello, Poplar Forest is one of the most documented early American homes, McDonald said. This is partly because Jefferson was stuck at The White House for the first two years of construction and asked for very detailed letters from his workers.

The historical restoration staff at Poplar Forest uses three sources of information. The first is written documentation and drawings, the latter of which Jefferson sent to his workers for guidance. The second is the investigation of the house itself, which sometimes tells staff as much as the written documents do. Thirdly, Poplar Forest can be placed in the middle of Jefferson’s lifetime as an architect and builder, so McDonald was able to look at what he worked on before Poplar Forest: Monticello. Jefferson used the same workers, the same materials, and the same classical sources for Poplar Forest and Monticello. McDonald was also able to look at the work Jefferson did at the University of Virginia.

“Poplar Forest had kind of been the missing link to understanding all of his work, but because he was very consistent in Roman moldings, finishes, and construction techniques, we have a huge amount of information,” McDonald said. “We’re also dealing with the same architect and builder, as well as the same features that Jefferson used, in a consistent way over a long period.”

One of the biggest physical changes occurred after the fire of 1845. The family living in the house reduced the volume of the central dining room—which had been a 20-foot cube with one of the few skylights in America—by demolishing the upper eight feet of wall and dropping it down to a 12-foot ceiling in order to put in an attic space.

“What had been this soaring light-filled space for Jefferson became the darkest room of the house,” remarked McDonald. “When we restored that space up to the 20-foot ceiling and put in the skylight, that was really one of the biggest structural and spatial things that we did. That was something you walked into and felt.” 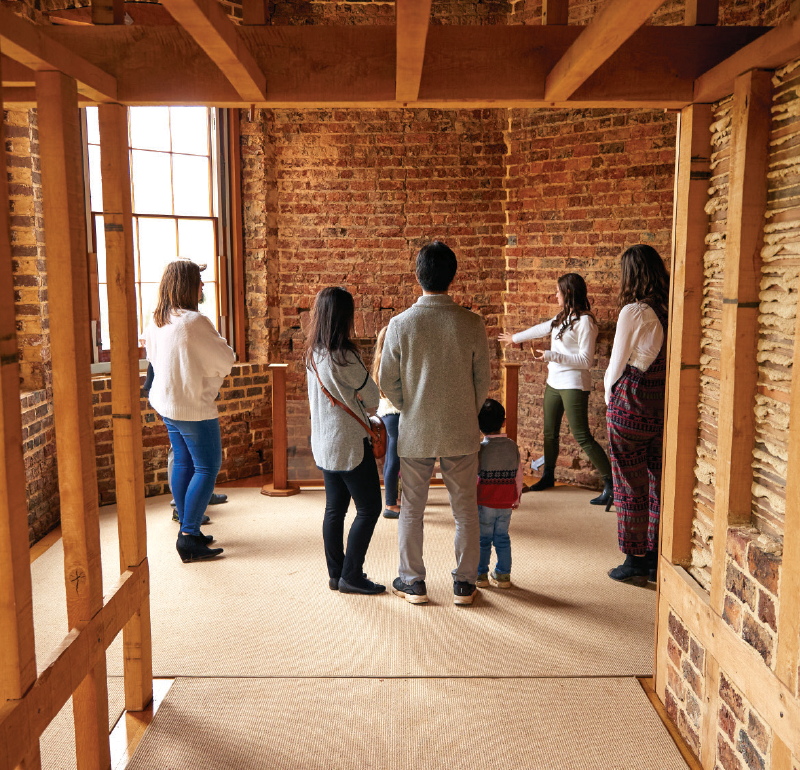 They finished the most basic piece of that project in 1993 just hours before Mikhail Gorbachev came on site for a big dinner to celebrate the 250th anniversary of Jefferson’s birth. Shortly before Gorbachev arrived, McDonald said staff took the scaffolding out of the middle room and revealed a large space which nobody had seen since the 1840s.

“That was really one of the big moments,” he recalled.

After that, it’s just been one project after the other—all of which have been exciting to McDonald, who said that picking his favorite project would be like choosing a favorite child.

Completing the four-room service wing that had been done like the wings on Monticello was another big undertaking. According to McDonald, putting that wing back together took nine years. Half of it was missing completely and half of it was altered into two separate buildings. The wing was torn apart and rebuilt in the 1840s.

The staff has worked meticulously to complete the restoration in the same way that Jefferson did it, which has meant reliving some of his challenges and frustrations.

Sometimes Jefferson wanted a particular material and it had to come from Europe on a ship to Richmond. Then, it had to either come on a wagon or come up the river on a bateau boat to Lynchburg before traveling another 10 miles to Poplar Forest.

“Sometimes we had to have the patience of Jefferson to get materials, and sometimes we had to order things from Europe just like Jefferson did,” McDonald said. “We never settled for the quick and easy and cheap thing. The time it took and the cost didn’t matter to us; we always had to get the proper thing. Our board of directors always stood behind the project and said, ‘You do what’s right and we’ll find the money.’”

The staff installed new moldings—classical moldings that typically go above Greek or Roman columns—in the dining room and parlor.

Poplar Forest plans to wrap up almost all of the interior restoration this year and is still trying to track down the Italian marble that Jefferson used for his fireplaces. A stair pavilion next to Jefferson’s bed chamber also needs to be restored.

The last big project is the painting of the entire interior, aiming to be completed this summer by the only two people in the country who still hand-make traditional paints. 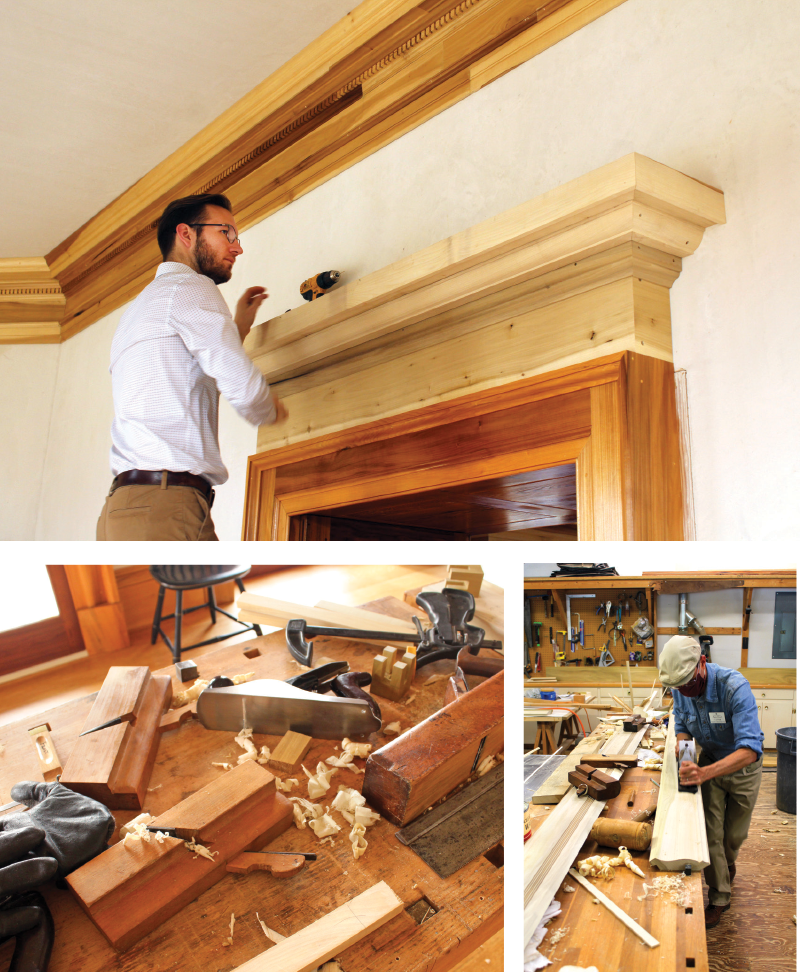 “That’s going to be a really revealing process because all the finishes in the house—the polished oak floors, the varnished walnut doors, the moldings, the plaster, and the windows—were special choices of Jefferson,” McDonald noted. “These finishes made it a very modern house for America, much more like the things he saw in Paris when he lived there for five years. The colors are going to be kind of the wonderful triumph of finishing the interior.”

Also being completed this year is the two-mile Parkway entrance off of Enterprise Drive.

There is still so much to interpret about Jefferson’s life here with his family and the lives of the enslaved population. McDonald said that staff will probably reconstruct some slave quarters and some agricultural buildings in the future. For instance, two buildings from the 1850s that housed enslaved people need to be restored.

“There are plenty of projects for another generation of people to go work on,” he said.

McDonald feels grateful that staff has been able to do this in the correct way and has no regrets.

“I feel satisfied,” he said. “We’ve always done the right thing, and I’ve documented the restoration in every conceivable way I can for future historians. What we’ve done is very authentically restored this setting, which was, I think, Jefferson’s most intimate place. Jefferson is still the mystery man, but if he was ever himself anywhere, it was at Poplar Forest.”

He said the nuances of accurately restoring the interior and the exterior of the site give visitors a much better way to connect to Jefferson.
“If there’s any portal to understanding the inner Jefferson, it’s probably at Poplar Forest,” he remarked. “I feel really good that we’ve been able to put this back in the right way for anybody in the future to kind of enjoy and understand. Very few people have had the privilege of working with Jefferson every day for 30 years, and that’s been the highlight of my career.”