There’s nothing like enjoying a meal in a place with endless memories of yesteryear—perhaps once frequented by your parents, even your grandparents. The stories told about these historic, and sometimes humble, eateries not only connect us to our local past but they also show how the shared bond of “going out to eat” has prevailed through the generations.

While Lynchburg has a diverse and outstanding selection of locally owned restaurants, we wanted to take some time to focus on the spots that have stood the test of time. These four restaurants, with a combined total of 335 years under their belts, have weathered war, economic depressions and everything in between—but what they all say has been the biggest challenge so far is COVID-19. 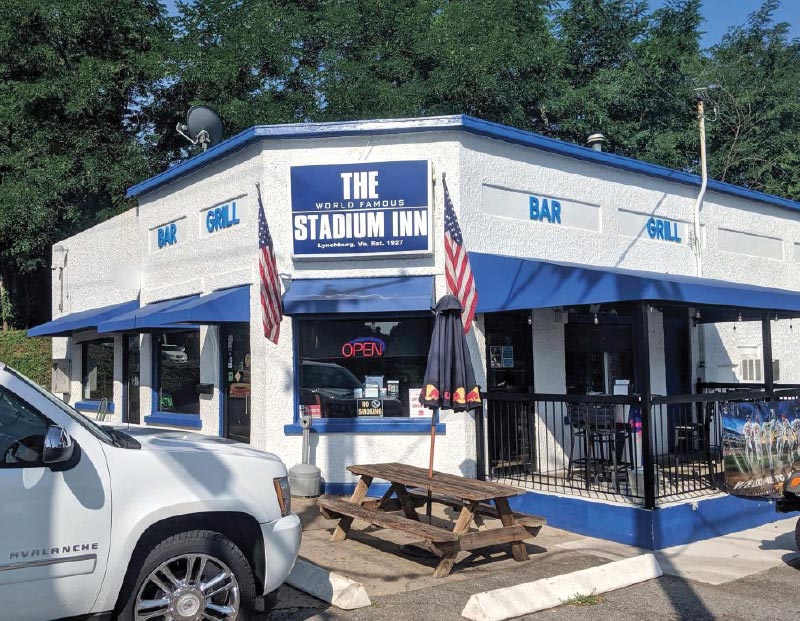 The World Famous Stadium Inn
This local hangout spot opened in 1927 when it was converted from a substation into a beer and burger joint. The owner now refers to it as the “greatest little bar in Lynchburg.”

Owner Daryl Burgess purchased the building in 2017 when he saw the restaurant had closed. “I just felt that couldn’t happen,” he said. “It’s a landmark and has such cool history.”

Burgess kept the restaurant closed for two months while he renovated the space into a clean sports bar and grill offering cold beer, low-price eats and TVs.

He threw away old equipment with 50 years of smoke on it including the grill, oven, fryers, photos on the wall and cleaned the windows 27 times until all the smoke was gone.
With all that work under his belt, it’s no secret that The World Famous Stadium Inn is no longer a smoking bar. Under Burgess’ direction last year, they now have a high chair for the first time to accommodate families. They’ve also worked hard to clean up their image in general.

“The servers know everyone and we make sure customers get home,” he explained. “There’s a three-strike rule… It’s now a family-friendly beer joint. The hardest thing I had to do was overcome the character of the place.”

Burgess is also the owner of The Filling Station in Amherst and knows his way around hamburgers, hotdogs and wings, so he incorporated all those items at the Stadium Inn.

During the pandemic, Burgess converted the restaurant into a mini-convenience store for two months selling steaks, hand sanitizer, paper towels and toilet paper.
But ultimately the business still suffered like most others and saw a 75% decrease in sales.

Now, thankfully, with lighter restrictions, Burgess said the restaurant has been filled to its allowed capacity every weekend.

With the growth in mind, he has plans to open an outdoor pavilion soon to provide for more seating. Burgess expects it to be a place for Lynchburg Hillcats fans to hang out after games at City Stadium.

“If you haven’t checked it out, you don’t know what you’re missing,” he said. “Come see us, say hi and you won’t leave unhappy.” 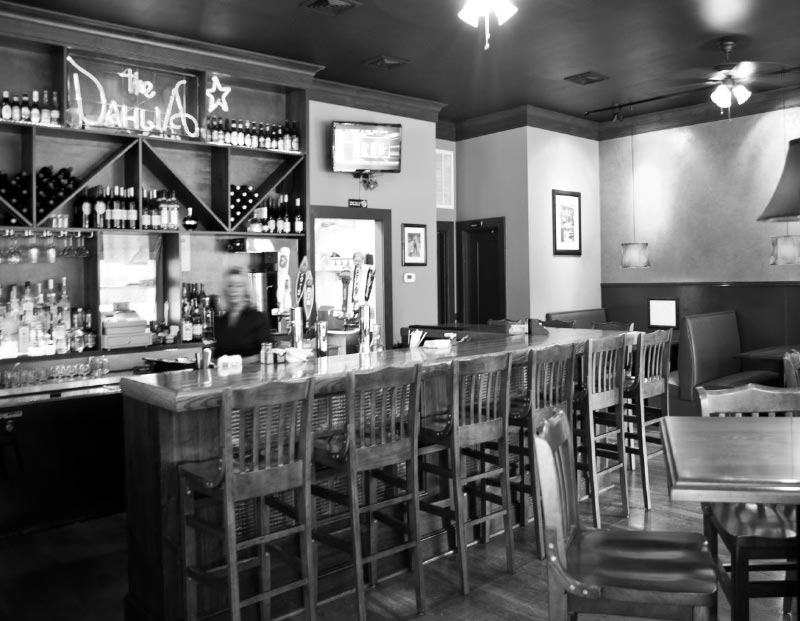 The Dahlia
Located on Bedford Avenue, this hidden gem is a little less hidden thanks to the recent boom of its neighborhood, which is now home to Golf Park Coffee and Small Batch Barbecue.

Angel Olds, who believes she is the 17th owner of The Dahlia, said the micro-local restaurant is home to some of the best seafood in town. Olds and her late husband used to own the Blue Marlin Seafood Market next door, so she knows her shrimp, scallops and fish.

When it opened in 1947, the restaurant was originally called The Blue Dahlia after a film noir of the same name. It was a popular local spot but over the years the restaurant received a bad reputation and went downhill, according to Olds.

“It became known as a dive bar. Men would come but wives wouldn’t step foot in the place,” Olds said. “Now it’s the opposite.” The upstairs is a little more upscale, while the downstairs, referred to as “the cellar,” has a more relaxed, English pub–style vibe.

After Olds purchased The Dahlia 11 years ago, she gutted the entire place and has since created a causal, family-friendly pub that focuses on quality food.

Though it’s more well-known now, she said her customers enjoy that the restaurant isn’t a run-of-the-mill chain and newcomers still have to plug the address into their GPS and hunt around for the front door.

“We are kind of secluded, but I’m hoping to get new signage for Bedford Avenue,” Olds said. Out of 74 years, Olds said the restaurant has only been closed for two years. 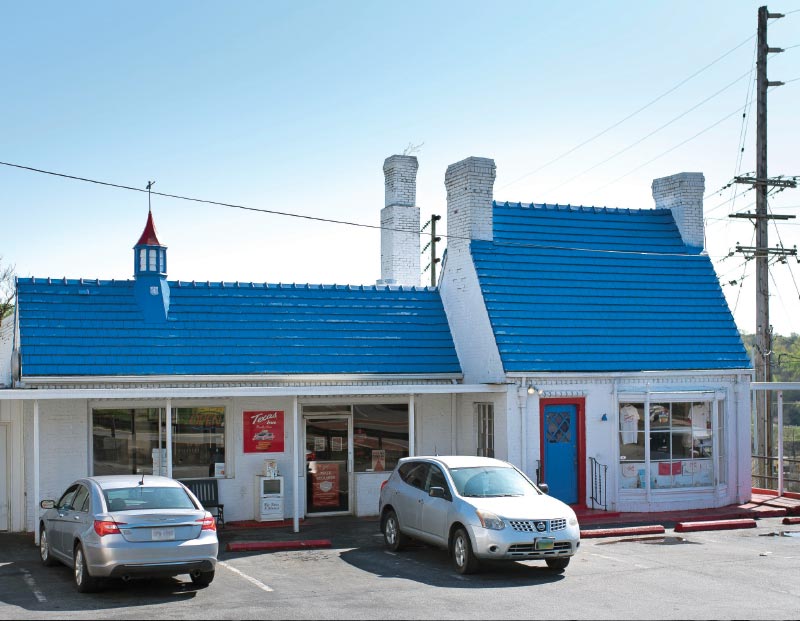 Texas Inn
You know you’re a local to Lynchburg if you know exactly where to find a “greasy cheesy.” That’s, of course, at The Texas Inn, better known as the T-Room, which operates its flagship downtown and a more recent addition in Cornerstone.

Ever since purchasing the iconic restaurant in 2018, Saunders has worked tirelessly to bring the T-Room back to its roots, starting with a six-month search for the original chili recipe.

Today, the T-Room is obviously known for its cheesy western—a hamburger with relish, a fried egg and cheese—and chili, better known as a “bowl.”

Saunders has kept some of the quirkier menu items that no one orders, such as the Denver, an egg and cheese sandwich on a bun topped with relish, or the Funny, a hot dog bun with no wiener topped with relish and chili.

He took cheese sticks off the Cornerstone menu because he felt it didn’t fit the character of the establishment, and the relish is made three times a week instead of just one.

Since its opening in 1935, the T-Room has witnessed The Great Depression, World War II, the Korean War, the Vietnam War and a handful of recessions, but COVID-19 has tested the tavern with its ability to only seat customers at its 15-seat counter.

Saunders placed a picnic table outside but it’s still the only establishment in town that has less than 50% capacity. “People have been really loyal ordering to-go and delivery,” he said. “They really saved our bacon.”

In the end, Saunders said the T-Room is the oldest continuously running restaurant in Lynchburg for a reason. “We serve good food fast and cheap,” he said.

The Cavalier
“The Cav” as locals know it might be as hometown as you can get. It’s known for its no-frills and relaxed atmosphere serving up to-die-for burgers and fries.

Located right off Rivermont Avenue, down the street from Randolph College, the dive bar is decorated with side-by-side license plates on the ceiling and walls and its wooden booths are covered with carvings of initials and notes from who once sat there.

Opening in 1940 under the name “The Cavalier Store,” the Cav started out as half grocery store, half restaurant where customers could shop and order a beer and hot dog. It was that way until the late 1960s or early 1970s and the wall between the two was torn down.

In 1987 Wells Duffy purchased the bar and continues to operate it to this day. He is responsible for adding in the main bar and the smaller bar near the ATM machine.

Jake Hill, a bar manager at The Cav, said it wasn’t uncommon for 1940s women to come in, buy cigarettes and smoke because their husbands wouldn’t allow them to light up at home. The restaurant is still an icon in the city and known as a bar reliable to always be open.

“It’s a good ‘ol neighborhood restaurant,” Hill said. “Anyone and everyone is welcome. We consider ourselves the Cheers of Lynchburg because everyone knows each other and if you don’t, by the end of your visit you’ll likely have some new friends.”

There is no question that customers keep coming back for the burger, which has been glorified by all walks of life. It pairs perfectly with the seasoned fries and homemade ranch.

In the past 34 years that Duffy has owned The Cav, he’s never experienced anything quite like the pandemic. He’s never had to adjust his hours and the restaurant has always stayed open seven days a week—but that was put on pause last year.

“Even with bad weather, we’re known as a reliable spot that will always stay open,”Hill said. “He’s never had to deal with anything like this.”