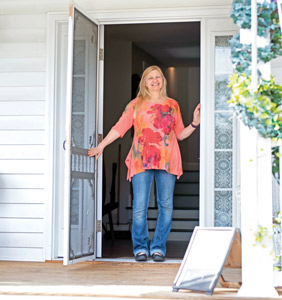 Forty-nine years ago a television classic was launched when the first episode of The Waltons appeared on CBS. The Depression to WWII-era series harkened to a simpler time, though a harder life.

If one word could describe The Waltons, it’s wholesome. Families could comfortably watch the show without worries about R-rated content.

And if one person could be called the show’s No. 1 fan, it’s Carol Johnson, who opened John & Olivia’s Bed & Breakfast in Nelson County in 2019 and named it after the parents on The Waltons.

The house is a replica of the Hollywood set of The Waltons. “Downstairs looks almost exactly like it,” Johnson says proudly as visitors take a tour. Upstairs, however, she had to reconfigure the set to accommodate the five bedrooms for her bed and breakfast.

Johnson has meticulously decorated the house to match the set. “I’ve gotten things from all over the United States,” she said. 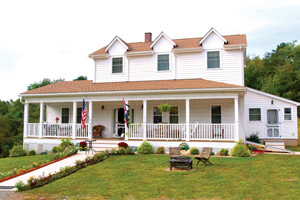 She exudes enthusiasm for everything about The Waltons and has memorized countless facts about both the fictional characters and the real-life ones they were based on.

She said her whole life changed in 2012 while binge-watching The Waltons. A commercial encouraged fans to travel to Los Angeles for the 40th anniversary of the show.

A native of Ukiah, California, Johnson had never lived anywhere else. She spent 30 years working as a bookkeeper for an orthopedic surgeon, while her husband ran a logging company. 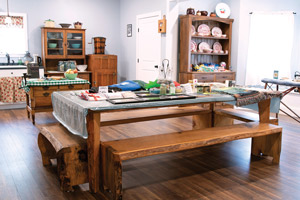 She decided to attend the reunion, where she met the cast and became a major groupie, flying around the country to watch various cast members in theater productions, including Michael Learned, who played Olivia, and Richard Thomas, who was John-Boy.

In 2014, she helped support the filming of a documentary on Earl Hamner, the writer and TV producer from Schuyler, Virginia, who based The Waltons on his novel, Spencer’s Mountain, which in turn was fashioned after his own childhood. Hamner also provided voice-over narration for The Waltons.

A prolific writer, Hamner also created Falcon Crest, another long-running TV series. He wrote six novels, three nonfiction works, and a number of episodes for TV shows including The Twilight Zone, Gentle Ben, and Nanny and the Professor.

Johnson struck up a friendship with Hamner and visited him in Los Angeles just a month before his death at age 92 on March 24, 2016. 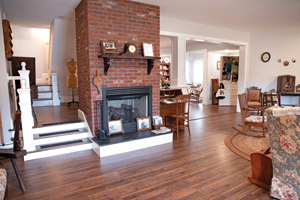 In 2017, as the 45th anniversary rolled around, Johnson flew to Virginia and volunteered at the Walton’s Mountain Museum, and 15 original cast members showed up at Hamner’s birthplace.

Johnson was among the fans interviewed by The Nelson County Times, and when Hamner’s Schuyler home went up for sale the same year, a reporter gave her a call to ask her about it. She said she would buy it, and she did, beginning what would become her collection of Hamner-related properties.

Visitors can now tour the 1915 Hamner house, which is also full of early 20th-century furnishings including a few original pieces. 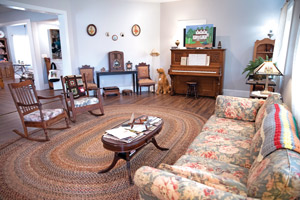 Hamner actually had seven siblings, but the TV series combined two of the boys into one character. “Hollywood didn’t want to pay for the eighth child,” Johnson said.

Hamner was the oldest of the real-life siblings. Hamner’s family moved to Schuyler, where the economy was based on soapstone mining by New Alberene Stone.

When the Great Depression hit, the mines closed, and Hamner’s father could only find work as a machinist at the DuPont factory in Waynesboro, about 30 miles away. Because the roads were so bad, Earl Sr. lived at a boarding house in Waynesboro during the week, only traveling home on the weekend.

The commute required a six-mile walk to the bus and his return walk on a snowy Christmas Eve in 1933 provided the inspiration for Hamner’s 1970 novel, The Homecoming, which became a TV Christmas special. 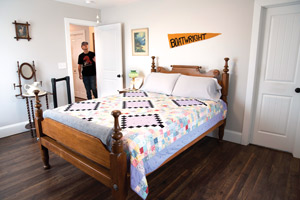 Johnson’s bed and breakfast attracts fans from all over the U.S. to stay in a room that replicates the one TV parents John and Olivia slept in. Or they can choose the grandparents’ bedroom, the girls’ room, the boys’ room, or the “Writer’s Room.” Some guests are moved to tears by the experience. “People come crying in and out,” Johnson said.

One visiting couple offered to donate money for elaborate Christmas decorations, but Johnson told them what she really needed was help decorating. The couple came from Washington, D.C. last year to help and will be bringing five couples with them in November to decorate for this Christmas.

Now 55, Johnson moved to Schuyler full-time in March to attend to her Hamner projects, but she still travels back and forth across the continent to visit her family. She also bought another building just up the road, an old school house built in 1917 that will take major renovations.

She has a handful of folks working with her to keep the operations going. “It takes a village to run this village,” she said.

Giving tours and hosting fans in both houses obviously brings Johnson great joy, but she says she’s not the only one: “It makes people happy.”

Even if you’re not a fan of The Waltons, a visit to Schuyler is a trip back in time, and the history of the small town is told through the life of Hamner and The Waltons at the Walton’s Mountain Museum, right across the road from John & Olivia’s Bed & Breakfast. 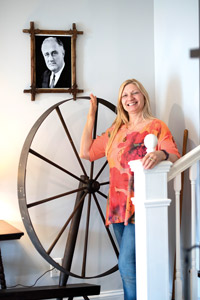 The museum, which is the old school building from where Hamner graduated in 1940, is not affiliated with Johnson’s properties, but you can hardly pass up the chance to visit all three.

The museum is owned by the nonprofit Schuyler Community Center on Walton’s Mountain, which also provides a place for residents to hold programs, take their children to play, and create community spirit, said Alison Morgan, a volunteer at the museum.

The museum boasts five replicas of the TV sets of The Waltons as well as a recipe room for the Baldwin sisters’ still. A 30-minute documentary on Hamner loops for visitors, who can also buy items at “Ike Godsey’s Store.”

The Walton’s Mountain Museum is open daily from May to October and weekends only in March, April, and November, and is closed Easter Sunday. Admission is $10 for those 13 and older.

Johnson offers tours of the Hamner House daily from 10 a.m. to 5 p.m. except for Easter, Thanksgiving, and Christmas. Admission is $10 for those 7 and older, and $15 to add John & Olivia’s Bed & Breakfast to the tour.