Lois Mason may be 91 years old, but she hasn’t let that keep her from enjoying two of her favorite things: “I love sports. Anything to do with a ball. I’m also an outside person.” 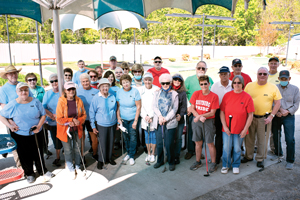 The Senior Putt-Putt League, a program of Lynchburg Parks and Recreation that’s run by two faithful community volunteers, lets her do both.

2021 marks 15 years since this spunky, close-knit group started meeting at the Putt-Putt Fun Center on Timberlake Road. It’s advertised for anyone 50 or older, but most participants are over the age of 65.

Willie Perry decided to form the league upon his retirement. He had previously worked with children in the Junior Putters of America organization for 23 years.

“So when I retired, I said I want to start working with these older kids,” he laughed.

The group meets every Monday morning from April through October and typically averages about 30 participants each time. They start at 10 a.m. but then shift the time to 9 a.m. when the summer heat settles in. 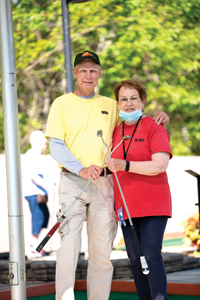 Putt-Putt Fun Center opens the facility up for the group to enjoy exclusively and offers a reduced rate to participants, which Perry says is important for seniors on fixed incomes.

“They also get outdoors, get some sun and some exercise,” he explained.

However, the most important benefit, he believes, is the socialization with other seniors.

“We have some who come just to be around other people. Some widows who have lost their husbands. It helps fill in some times of loneliness for them,” he said.

But that doesn’t mean the game isn’t taken seriously. There also are plenty of members who are slowly improving their putting scores and come to compete—including Mason, whose younger partner says the 91-year-old will sometimes ask for a do-over on a putt. 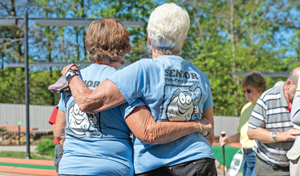 The top ranking elder of the league is Gladys Cantrell. At 95 years old, she still makes her weekly putt-putt outing a priority. She also is a true champion off the course as well;
Cantrell contracted COVID-19 last year, was hospitalized, but managed to beat the virus and come back to join her beloved putt-putt group just as strong and spirited.

“Some days I’m better, other days I’m not,” she laughed. “But I love playing, I love all of the people. It’s just fun.”

Want to Join?
All you have to do is come to the Putt-Putt Fun Center on Timberlake Road and you can be a part of the fun! They meet every Monday at 9 a.m. during the summer months.