Seven Unique Destinations for Virginia Beer Lovers With Lynchburg experiencing its own brewery boom, you may have beer on the brain when considering your next

With Lynchburg experiencing its own brewery boom, you may have beer on the brain when considering your next weekend road trip. Belly up to this tour of Virginia breweries, all located in historic, repurposed spaces. We’ll take you inside old schools, a bus station, a movie theater, a barn and even a Western Auto. 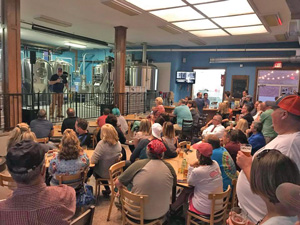 Ken Monyak opened what is now called Bristol Station Brews & Taproom in 2015 at a former Greyhound bus station on Piedmont Avenue in downtown Bristol. The station opened in 1936, and, though closed for more than 30 years, it still features some original architecture.

“We were able to get the original drawings for the building,” Monyak says. “So we know what the original configuration of the bus station was.”

With plans in hand, Monyak began brewing beer at the former food counter and set up a bar at what was once a ticket counter. “We tried to put it back where it was in 1937,” Monyak says, “but with the thought process that it was being a brewery.”

Bristol Station’s most popular brands include Piedmont Pilsner and California or Bust, a New England–style IPA. 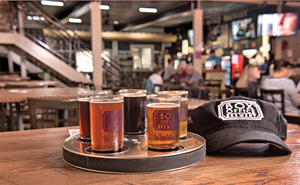 The front lobby was constructed in 1918; the theater was added in 1920 and remained open until 1959. Unfortunately, some walls caved in due to decay, says Price, the brewery’s co-owner. “We saved the old stage lumber,” he adds.

The owners also saved six murals plus 150 movie posters that had been discovered in the attic.

“We saved every possible thing from the theater,” Price says. “And we try to stick to the movie theme as much as we could. It’s turned into a destination. And it’s been fun to watch.” 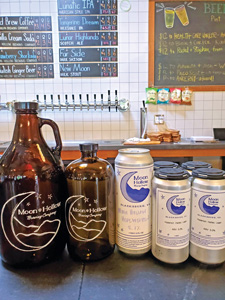 What was once a kindergarten classroom now serves as a beer bar for the Moon Hollow Brewing Company of Blacksburg.

Open since January, this brewery occupies space inside the old Prices Fork Elementary School, a building that has also been carved into apartments for seniors age 65 and up.

“We generally get more business from young parents and middle-aged adults,” says Liz Aker, a pourer at Moon Hollow. “And all of our beer names are themed to the moon and astronomical things and astronomy.”

In the beer-rich community of Nelson County, brewers count clear mountain water among the assets for making great beer. That’s certainly the story at Wild Wolf Brewing Company, where you’ll find a restaurant inside the former Rockfish Valley School, open from 1910 to 1939. The adjacent brewery produces such flavors as Blonde Honey, a customer favorite. 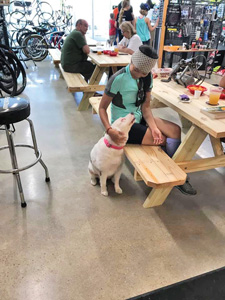 Molly’s Blind Dog Brewery takes its name from a nearly-blind, completely deaf Australian Shepherd. “She is a dog,” says the brewer, Chad Ritter. “She’s here just about every day.”

In Chester, the staff answers the phone “Molly’s Bikes and Brews.” And the top-selling beers include Strawberry Single Track Blonde.

Open since 2019, this microbrewery sits inside Molly’s Bicycle Shop, which is housed in a re-purposed commercial building that was once a scuba diving shop, just a few miles outside of downtown Richmond.

“There are no walls,” Ritter says. “It’s bikes and beers right up in here.” 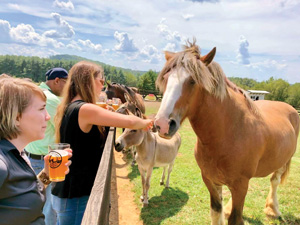 Right in the middle of a horse farm, Craig Nargi brews beer in Augusta County. He bought the farm in 2006 and opened the brewery in 2016. He’s also transformed it into a wedding venue.

Nargi grows five types of hops. “And we use all of our hops in our beer,” he says. “We use sort of a flat-base recipe. So we complement that recipe with different hops that the brewery wants to explore. It’s sort of like our hops are the brown sugar in a chocolate chip cookie recipe.” 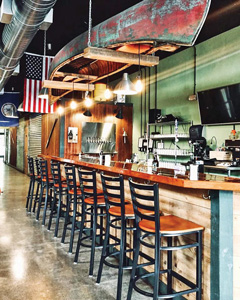 Twin Creeks Brewing Company operates two locations in the scenic Roanoke Valley. In Vinton, you’ll find the original brewery inside what was once a Western Auto. And, just off the Blue Ridge Parkway, Twin Creeks operates inside Explore Park at a historic tavern.

“They are about 15 minutes apart, but they’re completely different atmospheres,” says co-owner Andy Bishop. “The Vinton one is at a downtown location. And the one at Explore Park is like a very rustic, outdoor getaway setting.”

The Explore Park location opened in 2019 inside the Brugh’s Tavern, built in the 1700s at a site just off U.S. 11 at Troutville. The tavern was moved about 30 years ago. “There have been a couple of restaurants there over the years, but we are the first brewery,” Bishop says.