POUND fitness classes provide a heart-pumping workout (while marching to the beat of your own drum, of course)

Six years ago, Skyla Jade attended her first POUND fitness class and says her life changed forever: “I just remember during that class everything else did not matter. It was fun.”

One month later, Jade got her certification to teach POUND. Now, she is instructing her own classes and spreading POUND around the City of Lynchburg. Jade offers her classes at schools, nursing homes, rehabilitation centers and corporate companies.

One of her most popular locations is The Glass House in downtown Lynchburg. On occasion, its doors can be found open wide, full of women whooping and hollering, bursting with energy and pounding their hearts out.

During POUND classes, drumming is used as an enjoyable and effective exercise making it unlike any other form of fitness training. As summarized on Poundfit.com, the classes blend cardio, strength training, yoga and Pilates into one amazing workout class. The movements tone and sculpt all parts of the body.

During a routine, participants become part of the music by using Ripstix, which are plastic weighted drumsticks.

“The music is what completely drives this class,” Jade described. “You’re moving to the beat of the song. The sticks really make a difference for sure.”

While the “drummers” are getting lost in the rhythm, not only is the body getting a workout but also the mind as well.

“I mean you’re banging sticks on the ground together. After a long stressful day, who in the world wouldn’t benefit from that mentally? It’s empowering when we’re all in sync. You’re not counting. You’re all about the beats. It’s really awesome,” Jade explained.

Focus is drawn to timing and coordination. As a result, the brain is stimulated and thoughts like, “When will this be over” or “This is too hard” fade away.

Jade likes to take it to the next level for those who desire to be pushed. Simultaneously, she provides an inclusive and welcoming environment by showing modifications for each movement. There is no requirement to be at a certain fitness level.

“It’s for all ages, all stages of fitness. It’s definitely for everyone,” Jade said.

After attending a class, Jade wants the participants to feel hopeful about embarking on a fitness journey. But, most importantly, she wants them to have had a blast.

“It was very energetic. It was interesting and fun. Can’t wait to do it again,” Glover said.

“Right, right,” Martin agreed. “[Jade’s] energy was contagious. It was girl power for sure. It was a lot of girl power, which I loved.”

The all-encompassing, enthusiastic atmosphere of Jade’s POUND classes has built a strong community in Lynchburg. POUND is much more than just an exercise class—it’s an outlet for unity and fulfillment.

Along the way, Jade has accumulated some “POUND regulars”—one being Coral Carter. Through her consistent attendance at POUND, Carter has seen improvements in her lifestyle and health.

“I wasn’t in any kind of exercise program before. 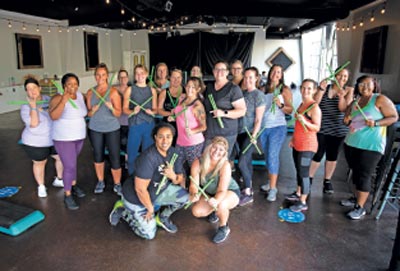 It’s made me stronger and more in shape. Mentally, I can let everything go for those 45 minutes. I feel refreshed and ready to go for the week. Skyla really pushes you but she makes it fun. She’s always ready to go,” Carter said.

In Jade’s opinion, making an impact on others’ lives and cultivating a community is the best part of POUND.

“Together we’re stronger as a whole, not just in the class but even outside the class,” she said.

Jade’s business, Skyla Jade Studios, also accepts this mindset. Its motto is “Where Fitness is Stronger Together.”

Jade uses this strength as she navigates the business world, which can always have its ups and downs. After taking POUND from North Carolina to downtown Lynchburg, she transitioned her traveling classes to a brick-and-mortar studio earlier this year. A setback came when she learned the owner of the building had new plans for the space.

But Jade says she is taking the change in stride—because her mission has always remained the same.

“My goal is to change lives one beat at a time, and it doesn’t take a building to do that.”