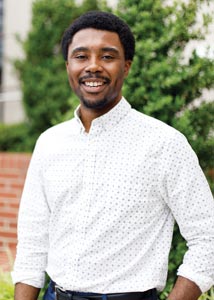 The creation of the play Color Me Beautiful: An American Odyssey has itself been a kind of odyssey. What began as a therapeutic exercise in connection during 2020’s stay-at-home orders is now an important production that stands to change the future of theater.

Local actor, singer, writer, and director Joshua Carter decided to reach out when the isolation of last year had him feeling boxed in.

“I was in quarantine by myself in an apartment, and in the midst of me feeling sorry for myself, it hit me that if you think you’re alone, there are about ten other people who everybody may have forgotten about,” Carter says. “So I decided to gather some people and say, ‘Hey, let’s read plays on Zoom. Let’s pick plays every week and we’ll read.’”

Zoom calls led to Facebook readings, which led to Carter proposing that people share their original works to be read and reviewed virtually. Taking part in these creative exchanges ultimately inspired Carter to begin a virtual writing workshop.

“I thought to myself, ‘One of my goals is to get new works for Black theater, so let me do a writing workshop,’” he recalls. “I reached out to a few people, and we did a workshop all the way through George Floyd and everything. It was very therapeutic that we got to write from our hearts and share with each other during that time.”

What happened next was nothing short of serendipitous. Without knowing about his writing workshop,Alluvion Stage Company called Carter and asked for, as Carter puts it, “a play explaining why black lives matter.”

“We had no idea; we were just doing our therapy!” Carter exclaims. “Luckily, we were in place and had the tools to make it happen.”

Carter, along with writers Cameron Dashiell, Jasmine Pierce, and Joel Ashur, composed Color Me Beautiful: An American Odyssey, a play in which “a Black teen, overwhelmed by a chaotic world, meets a dark fate and must pursue the weight of his existence on a journey through the stars.”

The play, which is a collaboration among Carter, Dashiell, Pierce, Ashur, choreographer Meagan King, Alluvion Stage Company, and Building Bridges Productions, Inc., will be presented at The Black Box Theater in Lynchburg July 23-25.

Carter says that the process of creating the play was fueled by questions, both external and internal. 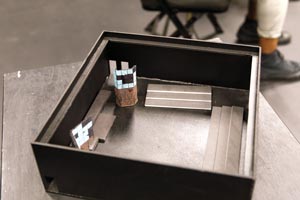 “I love to write with questions,” he notes. “When I was asked, ‘Why do Black lives matter?’ I was initially like, ‘Isn’t it obvious? Why do you need to ask that question?’ But then I asked myself that as an artist, and the answer is that our stories matter. The things people don’t see matter.”

“We knew we wanted to have a strong ‘why’,” added Pierce. “At the end of the day, we want people to look at Black people as just that: people. Not threats, not people who should be demonized. Just people with intrinsic beauty and value.”

Carter says one of the major themes of the play is the diversity of blackness. “Being African American comes with so many experiences and so many stories, and in our play, we travel through several stories,” he says. “We’re not always struggling through civil rights, although that’s a big part of how people understand who we are. It’s the conversations at the dinner table, it’s the moments before divorce, it’s the moments before death; we don’t see those things on stage because that’s not what people often see in reality. That’s what the humanities are for: we fill the gaps with life.”

When Carter looked inward at his own personal experience as a Black man as he worked on the play, the question he found there shook him to his core. 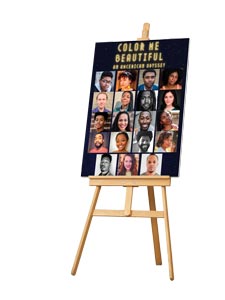 “My question as a creator on this project from my personal life was, ‘What if it was me?’” says Carter. “Take the case of Elijah McClain. He was very similar to me in that he was very calm and meek. He played the violin. He was caught up in a moment. He said, ‘My name is Elijah McClain. I play the violin, and I would never hurt anyone. I’m not that type of person.’ That put a little fear in my heart that sometimes it doesn’t matter what education you have or who you are; you don’t get time to share your credentials before you’re in a moment. A lot of the scenes I wrote came from a place of reflection on that question: ‘What if it was me?’”

In addition to addressing these and other complex and important questions, Color Me Beautiful will also help create opportunities for children, especially those who are underprivileged and at risk, through collaboration with local nonprofit theater organization Building Bridges Productions, Inc. Its founder, Janice Atkins Benejan, joined as a producer of the show.

“The arts offer a safe place to express the joys but also hurts of the world,” she says. “It provides people with a place to be vulnerable and oftentimes forces one to look at the world through someone else’s lens, creating a deeper sense of sympathy among people. This is vital for youth.”

One aspect of the partnership is Carter’s involvement with Building Bridges’ Story Makers Theater Camp this summer (June 28-July 9) for youth ages 12-18. 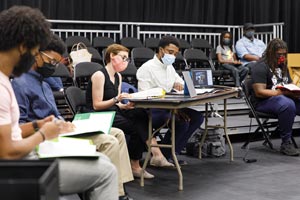 “Story Makers was already an idea in Janice’s head, but it really fit with Color Me Beautiful because it’s the same process of writing a script and producing it yourself,” Carter says. “I was brought into the team as an instructor to help make a curriculum for kids to write their own stories, produce them, and perform them for their families. Any child can sign up, but one of Janice’s goals is to reach underprivileged children, so scholarships will be offered.”

Carter believes that involvement in theater can help children—and adults—learn invaluable communication skills that will serve them in their real-world relationships.

“One of the skills that all people need to work on is communication: the abilities to step back, think, empathize, and be not only reactive, but also reflective,” he notes. “I think theater gives you tools for working on these things. Theater is a very spiritual exchange from one soul to another.”

Carter hopes that the production will create positive change on multiple levels. 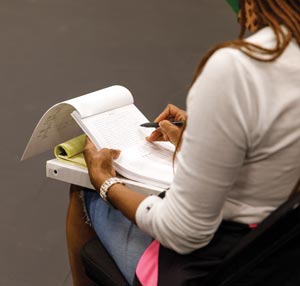 “Tyler Perry famously said, ‘Stop asking to be at someone else’s table; build your own,’” he says. “I hope that this play inspires someone to say, ‘I can write a five-minute script.’ I hope that some actor, whether they be young or old, Black or white or Latino, will take authority of their narratives and their stories. I pray that when they come to see this, they feel like they can do the same. I also hope that it will help people understand a perspective that they may not have seen before.”

“I personally hope people will just see the utter beauty of engaging with new stories and cultures and people,” Pierce adds. “I hope they will feel immersed in our world that it encourages them to step outside of their own after the show in order to better get to know people they wouldn’t usually engage with.”

For Carter, Pierce and the rest of the Color Me Beautiful team, the ultimate dream is to see the play find success beyond Lynchburg so it can reach more audiences and spark even more transformative dialogue about race, representation, empathy, and life itself.

Says Carter: “This is just the beginning.”