For only the second time in its history, Virginia’s Historic Garden Week was cancelled last year when COVID-19 came calling.

This year, however, the show will go on after months of careful planning. “We knew doing Historic Garden Week in the way we’ve done in the last 87 years was not going to work in 2021,” said Karen Cauthen Ellsworth, director of Historic Garden Week and editor of the guidebook.

Presented by the Garden Club of Virginia, Historic Garden Week will offer 30 tours organized and hosted by 48 member clubs during the week of April 17-24. The nation’s only statewide house and garden tour has contributed an estimated $518 million to state and regional economies in the last 50 years.

A photo from the Lynchburg archives titled, “1924 Ladies.” Location unknown.

While some clubs are still hoping they may be able to provide indoor house tours, each club is ready to make this year’s tour entirely outdoors. They’ve lowered ticket prices, created timed ticketing, and are requiring masks.

Ellsworth expects enthusiasm for the tours to remain high. “Gardens have given people a lot solace in this upside-down, topsy-turvy world,” she said.

The only other time the weeklong festivities were cancelled was during World War II, Ellsworth said, noting that funds were sent to London to help restore gardens damaged in bombing raids.

The Garden Club of Virginia has since extended its mission and goodwill to other friends in need, Ellsworth said. After Hurricane Hugo, a donation was made to replant trees in Charleston, South Carolina. After Hurricane Katrina, money was sent to the New Orleans Botanical Garden to rebuild its greenhouses.

The roots of Historic Garden Week date to 1927, when a flower show organized by the Garden Club of Virginia raised an impressive $7,000 to save some of the trees planted by Thomas Jefferson on the lawn at Monticello. 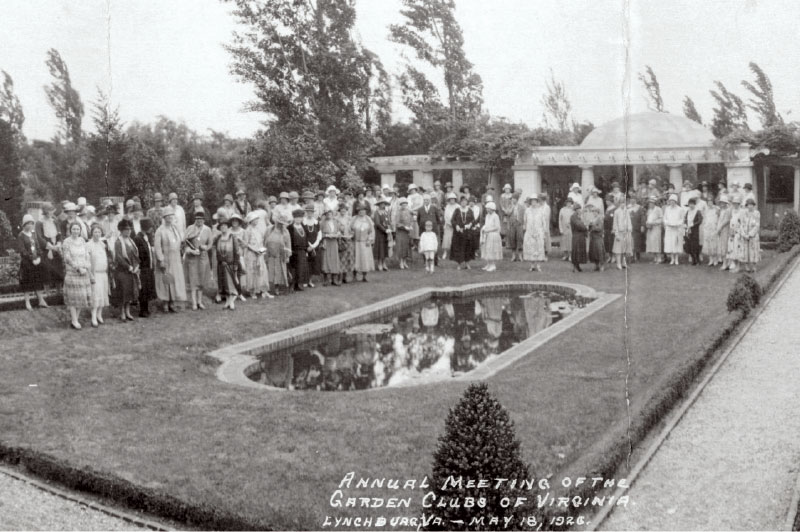 Annual Meeting of Garden Club of Virginia in Lynchburg on May 18, 1926.

During the past year, funds were distributed to Poplar Forest for restoration of the roundabout driveway and the creation and restoration of Reveley Garden at William & Mary.

The formal tours began in 1929, benefitting gardens at Monticello, Beatrix Farrand’s Green Springs Garden, Bacon’s Castle, Lewis Ginter Botanical Garden, and the State Arboretum in Winchester, among many others.

The Garden Club of Virginia’s horticultural programming and flower shows inspire one of Historic Garden Week’s greatest attractions, the world-class floral arrangements by club members featured on tours. An estimated 2,300 will be created for Historic Garden Week this spring.

Another plan upended by COVID-19 was a Garden Club of Virginia centennial celebration with renowned floral arranger Paula Pryke of London. The organization is working on having her do a virtual event this year. “We’re definitely trying to find the silver lining in all of this,” Ellsworth said.

Since 1920, the Garden Club of Virginia has grown from eight founding clubs to 48 clubs with more than 3,300 members. The efforts of these volunteers, along with the generosity of nearly 150 private homeowners across the commonwealth, make Historic Garden Week possible.

Normally, garden tours include tours of the four to five houses on the tour, but because the pandemic may force an outdoor-only focus this year, the group decided to capitalize on the change by emphasizing sustainable lawns and gardens. “We’re trying to educate people about what they can do in a small space to help our environment and our state,” said Jeanna Chapman, co-chair of Lynchburg’s Historic Garden Week. 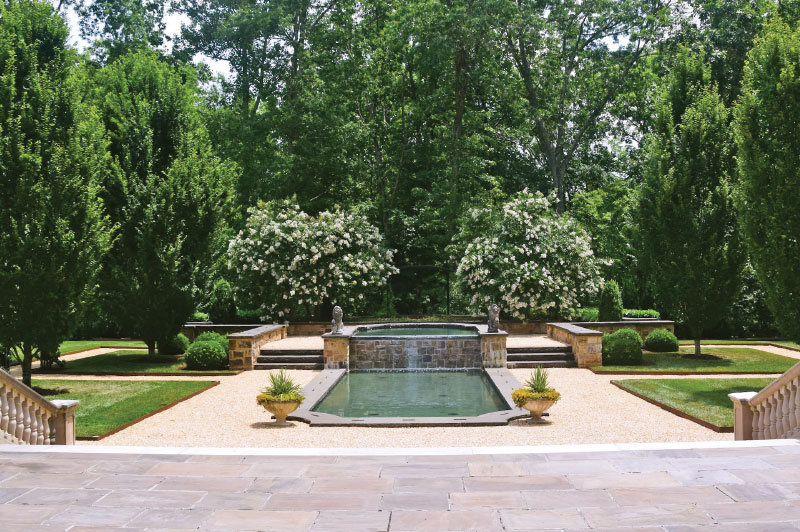 Garden of John and Jill Fees, one of the homes on Lynchburg’s 2021 Garden Day tour. Photos by Amanda Smithson.

Homeowners at the four houses on the tour are getting certified through Blue Ridge Conservation, a partnership between the Lynchburg and Hillside Garden Clubs started in 2019 to make Central Virginia more pollinator-friendly. A demonstration on how to plant a pollinator garden will be held at Irvington Springs Farm on Irvington Springs Road.

Several precautions are being taken to keep visitors safe. Tickets will be for sale for $25 online at VAGardenWeek.org, rather than for pickup, and will be offered as either morning (10 a.m. to 1 p.m.) or afternoon (2 to 5 p.m.) tours to allow for social distancing. There will be no day-of ticket sales.

Lynchburg has always been supportive of Historic Garden Week, Chapman said, noting that sponsors help defray the costs. The Bank of the James, for example, contributes $5,000 annually.

An added benefit of this year’s ticket will be the inclusion of local restoration sites. In Lynchburg, for example, visitors will also have free admission to Poplar Forest, Point of Honor, the Anne Spencer Garden, Old City Cemetery, the Miller-Claytor House, and the gardens at Sweet Briar College. “Lynchburg is special in the state in that there are several restorations sites,” Ellsworth said. 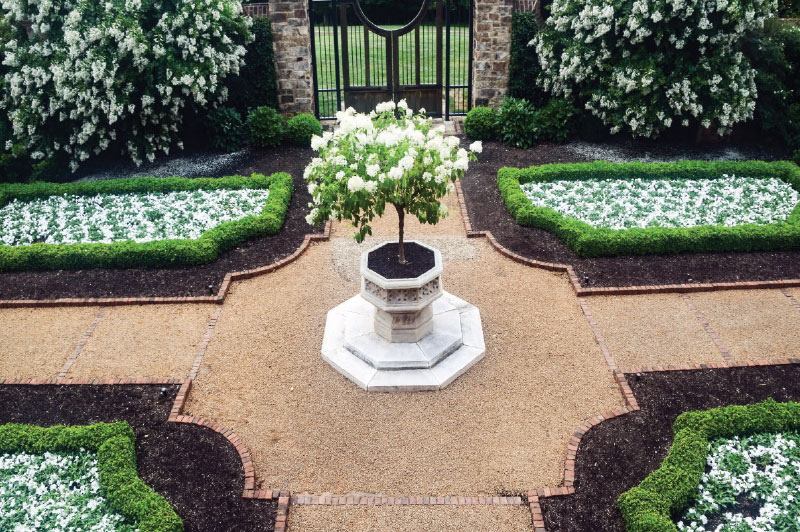 Tickets include admission to the following four private properties in Lynchburg:
1221 Fox Hill Road, John and Jill Fees, owners
This English Country estate, completed in 2013, combines stately architecture and the function of a working farm.
A recently added folly, an ornamental building, is nestled on the left as visitors enter. Farther along the bricked driveway are manicured lawns, a commanding stone forecourt, and a view of the residence. The gardens are filled with fruit trees, evergreens, and numerous native species. The family keeps bees and chickens, a large greenhouse, and maintains kitchen, vegetable, and floral cutting gardens.

1116 Running Cedar Way, Drs. Tim and Sarah Hellewell, owners
Built in 1983, this Federal Revival gem is a traditional Virginia Piedmont home, featuring Flemish bond brickwork, a Doric-columned entrance porch, and arched windows. The homeowners are committed to sustainability and biodiversity. The lawn has been pesticide- and herbicide-free for more than a decade, and the owners continue to reduce areas of manicured lawn to support pollinators and wildlife. Thirty-three solar panels on the rear roof provide all the power the property needs from March to October, while a fenced compost pile enriches the soil that sustains the vegetables growing on the back porch. Garden beds include a mix of old and new varieties of ornamentals and native species.

A commanding front lawn framed by pyramidal evergreens and low boxwood contrasts with the casual entertaining spaces behind the house, including hidden nooks, a fairy garden, stone terraces, and a Williamsburg-style potting shed. A cascade of seasonal blooms begins with camellias and is followed by azaleas, peonies, magnolia, and hydrangeas.

4108 Peakland Place, Dr. Samuel and Mary Omotoye, owners
This charming English Country manor–style residence was built in 1928 in the midst of Virginia’s English Revival architectural and landscape movement. To emphasize a rural setting, previous owners added a circular drive and a walled cottage garden to provide a transition to the multiple side and rear gardens original to the property. The front beds have undergone a recent transformation with the addition of numerous American boxwoods. Colorful perennials, such as poppies, delphiniums, and irises, soften the brick exterior. In the rear gardens a terrace, fashioned with salvaged flagstones from downtown Lynchburg sidewalks, juxtaposes the natural earth tones of the brick and stone house with the lush green extending to the rear of the property.