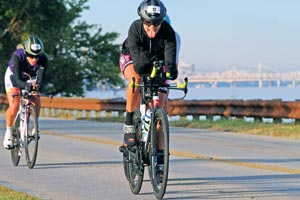 There was always a chance 28-year-old Laurel Graham could have Charcot-Marie-Tooth disorder—but growing up, she tried to push the thought out of her mind.

A hereditary disease, Charcot-Marie-Tooth affects the muscles in the feet, causing them to become weak, and hardens the development of bones.

“I knew it ran it my family, but we were optimistic,” Graham, a Lynchburg resident and Sweet Briar College alumna, said. “I would walk on the sides of my feet and running was always difficult. But I played soccer. We just thought maybe it was just that my feet were a little deformed.”

But in eighth grade, she received her official diagnosis. Soon, Graham hung up her soccer cleats and was unsure of what her future held.

“I couldn’t play sports anymore, which I just accepted,” Graham said. “I was still able to do equestrian so I could still be active.”

But in college, Graham decided she no longer wanted to be so limited and opted to have reconstructive surgery on her feet. She knew the road to recovery wouldn’t be an easy one. One foot would be operated on at a time and require at least a year to fully heal.

“Imagine having your feet completely ripped apart and then stitched back together,” Graham explained. “It was a lot like that, but I’m still grateful for it. [After the surgery], it was the first time I could feel my feet. There was hardware in my feet where they had screwed in bolts. The first real part of recovery was learning to walk again, and it was painful.”

As she slowly recovered, Graham set a goal: “I told myself that if I could make it through the pain, I would start running. It gave me a new lease on life.”

Graham’s doctors, however, weren’t so optimistic.

“They told me that I shouldn’t expect to run,” Graham said. “And even if I did, it would be too painful to do.”

Still, Graham wanted to try. After getting married to her husband, Mike, in 2013, she decided to start with something attainable and began training for the Virginia 4-Miler. In 2014, she crossed the finish line and was hooked.

“It felt amazing,” Graham said. “I was never a runner before my surgeries, but I wanted to try and see how far I could go.”

It was then Graham decided she wanted to try to train for a triathlon. She had always been a fan of swimming. For a year, she followed a rigorous training schedule that involved running two or three miles after a bike ride, followed by intense workouts during the week. The following summer, she completed her first triathlon in Chapel Hill, N.C.

“I felt pretty good about it,” Graham said. “I was trying to be smart about not hammering on my feet and trying to take it easy. But the real joy was in finishing, despite the soreness.”

As she continued to train for triathlons, there was a nagging desire in the back of Graham’s mind to complete an Ironman. While an Ironman is still a form of a triathlon, it’s much more intense. An Ironman race includes a 2.4-mile swim, followed by a 112-mile bike ride, and a full marathon.

Graham competed in a half-Ironman first in 2016 and quickly began preparing for a full.

“It’s a very time-consuming process,” she explained about training. “You’re running 10 or more miles at a time and setting aside other responsibilities to train. You have to sacrifice a lot—time with friends and family. And it’s hard to explain to people.”

Finally, in 2018, Graham was ready for Ironman Chattanooga. But eight days before her race, she got into a bike accident on one of her last training rides and was unable to compete. She ended up needing surgery on her collarbone and acromioclavicular joint. 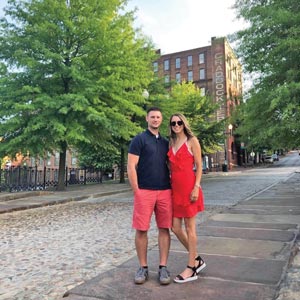 “It was a really hard setback,” she said. “For a year, you’re set on this goal and consumed with training and then suddenly it was over.”

Friend and fellow triathlete Lisa Peltier said it was devastating to watch her friend be unable to compete. Peltier and Graham had met early on in Graham’s training.

“I just couldn’t believe it happened,” Peltier said. “I see Laurel as a daughter, and it was hard to see it come crashing down in a weekend after she had this commitment to train for so long.”

But Peltier said Graham didn’t give up and set her sights on Ironman Louisville—another year away.

“Laurel is a ‘glass half full’ type of person,” she said. “She’s never let a disability stop her and once she has her mind made up, she’s determined.”

Graham said she’s convinced that her surgeon for her bike injury thought she was crazy for wanting to get back into training: “But he did all he could to support me and get me back on my bike as soon as possible.”

A year later, Graham finally completed her first Ironman in Louisville, Ky. Peltier traveled with her to watch her friend finally cross the finish line that she had worked so hard for.

“It was the first time I had attended an Ironman as a spectator and Louisville was such a fun event to be there for,” Peltier said. “It has the most amazing atmosphere for those competing. The finish line is bright so you can’t see anyone except the end.”

“The pain I felt through racing just melted away,” she said. “It made every single moment to that point worth it. I couldn’t believe that I had crossed an Ironman finish line after years of dreaming about it.”

As for her doctors, Graham said they are still in awe of what she’s been able to accomplish.

“My orthopedic surgeon who worked on my feet and ankles isn’t completely thrilled due to the stress and wear it places on my hardware and the negative impacts it could have,” she said. “But my physical therapist has been incredibly supportive and thinks it’s amazing.”

Through training, Graham said she has become part of a tight knit community of triathletes, who she says have become her closest friends over the years.

Triathlete Kayla Long met Graham through her job where Graham served as a scribe. 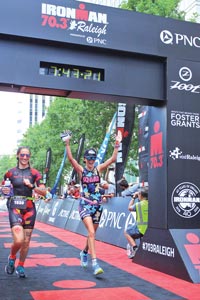 “One of the doctors that she was working for told me that she was training for a triathlon and that I should talk to her about it,” Long said. “I trained with her while she was working toward Louisville and I’ve just seen her go through the highs and lows of training.”

When we first started talking with Graham earlier this year, she was intensively training for Ironman 70.3 Virginia’s Blue Ridge in Roanoke. She kept up her training schedule as best she could during the COVID-19 pandemic, although she couldn’t swim since pools were closed and had to limit bike rides to reduce the risk of an accident or injury that would send her to the hospital.

However, around the time this magazine went to print, the announcement was made that the triathlon was rescheduled to 2021.

While it’s “definitely a bummer,” Graham says she’s going to continue training because she enjoys it. She’s also signed up for an Ironman in North Carolina in October.

Graham also has her sights on a new goal too—medical school. She said it’s a career path she’s always come back to and has begun applying.

“I had so many great physicians and medical personnel care for me,” she said. “What I’ve been through has given me this empathy because I’ve been there.”

Ultimately, Graham wants to continue to use her story to encourage others.

“People should never sell themselves short or count themselves out,” she said. “Everyone has their stuff. You either find a way [through]or you’ll find an excuse.”