Is a too-small patio putting a damper on your parties? Or is the blazing afternoon sun making you sweat during that 5 p.m. beverage? It might be time for an outdoor space overhaul.

“You have to balance aesthetics with function,” says Rebecca Mahanes of Land Tech Group. 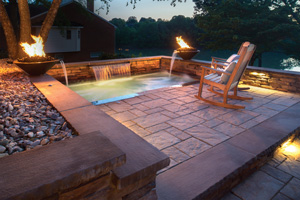 First, she says they usually address space issues. “The big thing is being able to have space for furniture and people to gather,” she says, adding that many standard new builds only provide a small concrete pad in the backyard. Their team will start by using pavers or concrete to make an area large enough for the homeowner’s entertaining needs.

Another common complaint that prevents patio usage—the sun. “In Forest, where a lot of newer homes are being built, there is not a lot of shade,” says Mahanes. “Pergolas are becoming more popular.” The slats or some type of fabric can provide the extra shade homeowners need to feel comfortable. Not only does it look good, it’s typically a very economical addition, she says.

Whether you have an unlimited budget or just enough money for one cool feature, we hope you can gain some ideas from this stunning project Land Tech completed a few years ago in Forest’s Ivy Lake neighborhood: 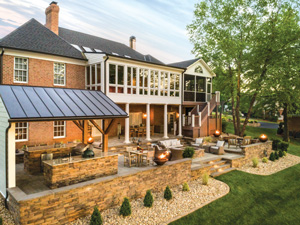 Overall Aesthetics:
It’s always trendy to have your outdoor entertaining area blend into its natural environment. Here, Mahanes says the homeowners wanted a rustic look. A stacked stone retaining wall adds to that vibe as well as the A-frame metal roof over the kitchen area.

In-Ground Hot Tub:
This custom in-ground hot tub has a water feature that runs on a pump and flows into the spa. It’s partially raised so that guests who don’t want to get in the water can still socialize with those who are.

Fire Bowls:
These run on gas/propane and can either be turned on with a wireless antenna or lit with a match. “I love these because they create a warm ambience,” says Mahanes. “It’s not just about having the space but also having the nice lighting at night.” Landscape lighting is another way to create a cozy atmosphere.

Outdoor Kitchen:
These are a highly popular addition to outdoor areas right now. Mahanes says those who seek one out always want a grill, but many are also starting to request smokers, such as a Big Green Egg. Outdoor kitchens function best if they are covered well and have enough counter space to operate like an indoor kitchen.

Fire Pit:
“This home’s fire pit is really the centerpiece that ties the whole area together,” says Mahanes. She adds that there’s about a 50/50 split between wood burning and gas fire pit installations. “People who like the smoky smell choose wood for the camping ambience. Those who choose gas just want to come out, turn it on and be done.”