In many ways, Emaleigh Blankenship is just like all 9-year-old girls: she’s in third grade, she loves music, and she takes her dog out for walks. And like many other young girls, Emaleigh has a problem with people who stare, a sentiment that stemmed from her frustration with strangers staring at her through the years.

Her mother, Adrienne Blankenship, shares that same frustration and adds that “don’t stare, just ask” has become Emaleigh’s signature catchphrase. As Adrienne reminds us, “We’re all different in our own way; some you can see, and some you can’t.”

You see, it’s more than her golden hair and sparkling blue eyes that make Emaleigh stand out from the crowd—she has an extremely rare progressive overgrowth disorder known as CLOVES Syndrome. 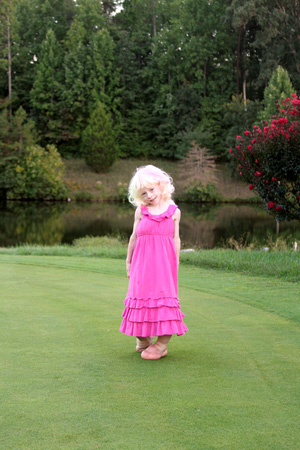 Children who have CLOVES often have fatty tissue masses on their torsos, asymmetric growth, dilated veins, scoliosis or a tethered spinal cord, and other physical issues. In Emaleigh’s case, her thin, muscular upper body contrasts her feet and legs, which contain more fatty tissue. The syndrome occurs in utero when a part of a developing cell mutates, thus causing the cells in that specific body part to grow rapidly.

In 2009, Adrienne was pregnant with twins and attending prenatal checkups. She and her husband, Christopher, learned something wasn’t right with Emaleigh’s feet at the 18-week ultrasound. While twin brother Michael was unaffected, Emaleigh’s other symptoms emerged when the twins were born at 28 weeks. Initially, the Blankenshipsʼ medical team at UVA thought Emaleigh might have Proteus Syndrome, but after scouring the internet for conditions with similar symptoms, the family reached out to Boston Children’s Hospital (where CLOVES was first discovered). They headed to Boston that spring, and Emaleigh was officially diagnosed with CLOVES.

It wasn’t long before the bones in Emaleigh’s feet grew uncontrollably, necessitating several foot surgeries (including toe amputations at the tender age of 2). Because Emaleigh’s feet are two radically different sizes, it’s difficult to find shoes that both match and fit. Adrienne and Christopher have had to develop creative solutions for Emaleigh’s footwear; in the past, they’d use heat to stretch out different pairs of Crocs.

Right after her surgeries, Emaleigh was diagnosed with Wilms’ tumor, a rare kidney cancer that affects children and is more common in children with overgrowth syndromes. After four months of chemotherapy, doctors saw that one of the kidneys wasn’t responding to the treatment, which ultimately determined the need for a nephrectomy (kidney removal).

“We say remission right now because the cancer’s not active,” Adrienne clarifies. “It’s kind of a hold your breath and see what happens—which is what we have done with CLOVES Syndrome anyway. It never ends. You may be done with chemo, but you always have secondary effects, or you have late effects from chemo. This is a progressive syndrome—we manage symptoms as they arise with the knowledge that her legs will grow uncontrollably.”

With two working parents, two kids, three pets and extensive travel back and forth to Charlottesville, Cincinnati, and Boston for medical appointments and treatments, calling the Blankenship family busy is an extreme understatement. Still, they try to find the joy in their frequent trips north. For example, after growing weary of hotel stays, they purchased a camper to make a routine visit feel like more of a road trip experience. When time allows, they travel to other attractions along the way to break up the monotony.

Over the course of time, the family has had to adjust their lifestyle, but Adrienne explains that they each find strength in one another. “Over the years, we’ve just had to step back, refocus our priorities, and regroup as a family unit and know that our support is right here.”
She adds that Michael is a great support to his twin sister and has taken on the big brother role. “He knows it’s his job to help stand up for his sister!” she says. 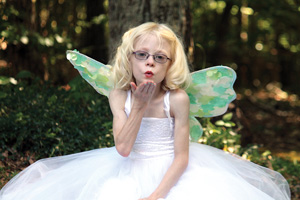 As far as the future and prognosis, Adrienne says there just isn’t enough information yet. With that in mind, the Blankenships are on a mission to raise awareness. When the family first heard of CLOVES, there was very little information available. Fueled by their desire to provide other parents of CLOVES patients with access to better information and to help raise money for the costly travel and lodging to and from the Boston Children’s Hospital, the Blankenships set up “The CLOVES Foundation,” a nonprofit focused on improving the lives of CLOVES patients by funding Overgrowth and Vascular Anomaly research. The foundation is committed to raising public awareness, providing member resources, and establishing support networks within the medical and overgrowth communities.

Adrienne and Christopher are considering Emaleigh’s possible participation in a clinical trial for a new oral medication. If successful,
the medicine could reduce the fatty overgrowth and potentially eliminate the need for future surgeries. In order to take part, Emaleigh will need to make monthly visits to the hospital in Boston, causing her to miss Thursdays and Fridays from school every week for months on end.

The trial will also require regular bloodwork, MRIs, and other examinations, not to mention concerns about potential side effects from the new drug. To help reduce the need for regular travel and the number of school absences, Emaleigh’s doctor at UVA has offered to carry out the necessary testing and is currently reaching out to the medical team in Boston for approval.

Without a cure in sight, future surgeries will be required to maintain Emaleigh’s quality of life. “We really are trying to make sure that some of these decisions are hers … the things that aren’t life-threatening. We don’t want to push her in any direction,” Adrienne says. In the meantime, she has a simple request from the community—stop staring. “Having a daughter and knowing that her life is going to be harder—I just want people to be kind. We’re all working to overcome something.”

Charlotte Farley is a full-time freelance writer and editor. A native of Long Island, New York, she comes by her fondness for bagels and Billy Joel honestly.These days, Charlotte lives in Lynchburg and enjoys exploring Virginia with her husband and two children.