A voyage on Virginia’s “Valley” road STORY & PHOTOS BY JOE TENNIS Route 11 parallels I-81 like a neighborly older sibling, taking you from the

A voyage on Virginia’s “Valley” road

Route 11 parallels I-81 like a neighborly older sibling, taking you from the scenic Shenandoah Valley to the majestic mountains of Southwest Virginia. This highway grew from the Native American Warriors Path to the Great Stage Road and the Valley Turnpike. It’s a road that runs more than 339 miles in Virginia, north to south, slipping in and out of Staunton and Salem, Roanoke and Radford, yet always staying close to I-81. >>

Winchester sits near the top, little more than a dozen miles from where U.S. 11 enters Virginia at Berkeley County, West Virginia. Winchester is the hometown of country crooner Patsy Cline, as well as where George Washington established a surveying office in 1755, long before the Revolutionary War. I visit monuments to both individuals in Winchester and take a stroll at the handsome pedestrian mall of “Old Town Winchester,” just off U.S. 11.

Heading south, I soon slip into Stephens City, checking out the Newtown History Center. Then I take a 4.7-mile detour on Va. 277 to discover Dinosaur Land, where timeless replicas of reptiles stand with frozen ferociousness alongside educational explanations.

Back on Route 11, I meander into Middletown and stop at Shaffer’s BBQ & Market; it sports a funky collection of rehabbed furnishings inside what was once a service station. “We’re a Route 11 barbecue joint,” says storeowner Matt Shaffer. “Route 11 used to be, before the interstate, the only way to get around. And barbecue is sort of timeless in that sense, as well.”

For lunch, I sample Shaffer’s most popular items—a chopped pork barbecue sandwich with a side of broccoli salad. Next, I find Strasburg, where Route 11 makes a hard right beside buildings boasting murals. Near this small town’s center stands a movie theater transformed into the Box Office Brewery.

A quick detour off the highway finds the factory of Route 11 Potato Chips. Originally established at Middletown, in 2008, this company moved to its present location at Quicksburg, where the business now handles 14,000 pounds of potatoes per day. All chips are kettle-cooked, says clerk Freda Sigler. “And we cook six days a week.”

Through most of its journey, Route 11 is a connector of colleges, caverns and courthouses. Until I-81 came on the scene in the 1960s, this was the main north-south route through the Valley of Virginia, cutting past the campuses of James Madison University, Radford University, Mary Baldwin University, Virginia Military Institute, Washington and Lee University and Hollins University—to name a few.

Historical markers line Route 11 from Glade Spring to Greenville. And you could spend days reading about long-gone battles and pioneers. Or you can make Route 11 a journey of wine, wild honey and a school bus turned into a food truck at the Valley Pike Farm Market.

Housed inside a “bank barn,” relocated to the Weyers Cave community, the Valley Pike Farm Market faces Route 11, midway between Harrisonburg and Staunton. “One of the biggest draws that we have is just the building and the warmth of the building,” says owner David Gardner. “It was going to be destroyed, and I just hated that. It was 125 years old.” 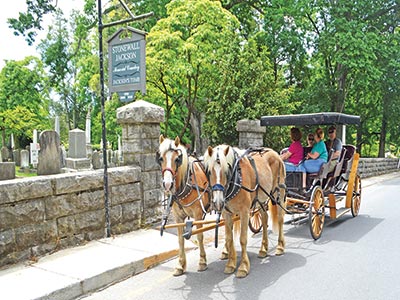 Down in Staunton, I explore the birthplace of Woodrow Wilson, the 28th president of the United States and a guiding force during World War I. Where Wilson lived for the first few months of his life is preserved along Route 11—just like the birthplace of his second wife, I shall find, many miles down the line.

But, first, it’s time for an ice cream break. And I take a right at Wright’s Dairy Rite, a Staunton landmark along Route 11 since 1952. Golden oldies blast on the jukebox at this frozen-in-time ice cream stand.

I order a chocolate malt milkshake at Wright’s and head to Lexington for the night, moving into a 1901 house called A Secret Garden. It’s a bed-and-breakfast that’s not marked with a sign, but they will leave the light on for you.

For dinner in downtown Lexington, I take a brisk walk to feast on steamed mussels and a salmon club at the Southern Inn. The next morning, for breakfast, A Secret Garden’s Amber Barraclough serves a spinach frittata with fresh fruit and thick slices of bacon. Later, for lunch, I savor shrimp tacos at the Devils Backbone Outpost Tap Room & Kitchen, which sits on a hill overlooking Route 11, just a couple miles north of this handsome city’s historic district.

Lexington is where the South’s two greatest generals, Robert E. Lee and Thomas “Stonewall” Jackson, lay at rest—now more than 150 years since the silence of the Civil War battlefields. Lee and Jackson are loved in Lexington, and their names are on monuments and street signs. You will also find a museum dedicated to the early life of Jackson, pinpointing the time when the devout Christian served as a teacher at Virginia Military Institute during the 1850s-years before the Civil War.

The most entertaining way to see Lexington is to take the carriage tour, where you’ll hear stories of fires that fell on the city and how the streets were lowered to help wagons roll uphill. You’ll even hear about the ghost of Lee’s horse, Traveller, as the tour rolls to Washington and Lee University. “His ghost was seen running across the campus of the school,” says Courtney Rhodenizer, a longtime guide for the Lexington Carriage Company.

Heading south from Lexington, I cannot resist stopping at what sits essentially at the center of Route 11 in Virginia—and even beneath the actual road: Natural Bridge.

Now the centerpiece of a state park, Natural Bridge is the key attraction of a Rockbridge County village that includes the fun-loving Dinosaur Kingdom II. Much like Dinosaur Land near Stephens City, Dinosaur Kingdom II is a showpiece for the fertile imagination of artist Mark Cline.

For two nights, I move into the Country Inn & Suites near Hollins University, only a half-mile
from Route 11 on the north end of Roanoke.

This hotel proves the perfect point to base explorations, beginning with a late-night supper
at the nearby Hollywood’s Restaurant & Bakery, which serves a Cranberry Salmon entrée on a
menu that also features a “Route 11 Burger.”

At daybreak, I make a beeline for Buchanan, a town on the James River, about 20 miles north of Roanoke. I trace the swinging bridge above the James, stretching beside Route 11. Then I take a five-mile kayak journey with Twin River Outfitters, a business operated by twin brothers John and Dan Mays.

“People like the scenery,” John Mays tell me while standing on the banks of the James River. “It’s just a fun, family-friendly activity, outdoors, in nature.”

On the river, I drift across light riffles and slip beside the silent stone pillar of a former railroad crossing. I also paddle beneath I-81, where I quietly listen to its roaring traffic. I spy on turtles and baby ducks. And I work up a hunger for more fish—satisfied with a chunk of fried Pollock at the Buchanan Fountain and Grille on Main Street.

Back down in Roanoke, I roll down Route 11 on Williamson Road, which leads to the attraction-packed downtown district, where you’ll find the O. Winston Link Museum, Taubman Museum of Art, Virginia Museum of Transportation, Hotel Roanoke and Center in the Square. You’ll also catch a glimpse of the famous star on Mill Mountain without ever leaving Route 11.

A caveat: It’s terribly tough trying to figure out where Route 11 continues through Roanoke. It’s not well-marked.

Maps and GPS also do not agree. But do find and follow Salem Avenue, take a left on 13th Street, and keep going across the Memorial Bridge, eventually coming upon Raleigh Court, a neat neighborhood centered by the Grandin Theatre, built in 1932.

Sailing into Salem, Route 11 crosses the Roanoke River three times until reaching Salem’s quaint downtown district, where I window shop at the Antiques by the Market Antique Mall then munch on a soft-shell crab sandwich at Awful Arthur’s Seafood Company. I also devour a plateful of oysters, which, I’m told, had been harvested from the James River—many miles downstream from my kayak ride into Buchanan.

South of Salem, Route 11 overlaps U.S. 460 on a scenic stretch that links Elliston and Shawsville to Christiansburg, the courthouse town of Montgomery County.

Here, I find another retro restaurant, Dude’s Drive-In, standing next to the Starlite Drive-In Theatre.

I ramble on to Radford, cross the New River and then pass through Dublin. I ultimately land in Pulaski, where I stand in awe of the stately Pulaski Train Station then study the model railroads at the Raymond F. Ratcliffe Memorial Transportation Museum.

Brace yourself: Leaving the once-booming factory town of Pulaski, Route 11 climbs up and over Draper Mountain. It’s a fun ride on a motorcycle. Crossing Draper Mountain also affords overlooks on both sides of the highway, providing picnic sites and insights into the valley below. 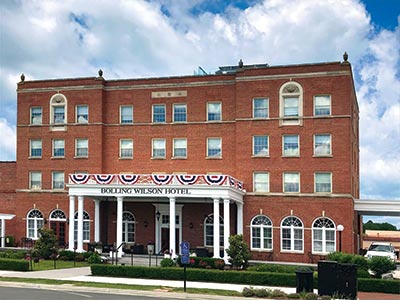 In what you might call Route 11’s final act through Virginia, the highway drifts down Draper Mountain and simply joins I-81 for the next 16 miles, zipping past truck stops and antique markets. Then it takes a fancy curve into the handsome town of Wytheville, with its roomy Main Street anchored by the Bolling Wilson Hotel. I spend the night on the fourth floor of this structure, topped with “The Perch,” affording a bird’s-eye view from the roof.

This is the hometown of Woodrow Wilson’s second wife, Edith Bolling Wilson, and her story is told at this hotel through her love of canaries, orchids and bourbon. It is also shared at a museum in the “Bolling Building,” her birthplace. Various scenes of her life, as well, appear on a mural just off Main Street in an alley at a crosswalk near the center of Wytheville.

Come dusk, I cross Main Street near that downtown mural.

And I take a taste of light beer while tearing into a rack of ribs—served with sweet potato fries—at the new 7 Dogs Brew Pub on Wytheville’s Spring Street.

About 25 miles south of Wytheville, Route 11 provides the Main Street of Marion, a town where the nationally-televised “Song of the Mountains” PBS TV-Show originates from the 1929 Lincoln Theatre. Marion is also known for its downtown chili cook-off that coincides with the Hungry Mother Festival at nearby Hungry Mother State Park on the third weekend of each July.

At the end of July, look for the Virginia Highlands Festival in artsy Abingdon, a courthouse town lying about 25 miles south of Marion—yet little more than 15 miles above Route 11’s touch into Tennessee at Bristol. Abingdon is where you’ll also find live musicals, dramas and comedies at the Barter Theatre—right on Route 11—plus the must-try Strawberry Kiwi Cosmopolitans at Morgan’s, an upscale restaurant on Main Street at Courthouse Hill.

Bristol wraps up Route 11’s ride through the Old Dominion with a green space at Sugar Hollow Park, open space for development at The Falls and a salute to songwriters at the Birthplace of Country Music Museum. Bristol is the town where country music legends Jimmie Rodgers and The Carter Family each made their first recordings, separately, in 1927. It’s also where current country music superstar Kenny Chesney made his first recordings—for a cassette, released in 1990—at Classic Recording Studio on Moore Street. All of these musical milestones—and more—are celebrated with block parties, festivals and concerts on Bristol’s State Street, where you’ll see Virginia on one side and Tennessee on the other. State Street lies about 300 miles south of where country music’s Cline lies at rest in Winchester—a far journey, for sure, yet one that’s connected by that long and winding road.