As Interest in Downtown Life Grows, a Local Family is Providing the Historic Homes

From HGTV to the “swipe left” feature on Instagram, American culture is more preoccupied than ever before with all things “home renovation.” Indeed, few pleasures are more enjoyable than viewing the dingy “Before” photos of a hapless property, only to then compare them to the glorious “After” images. Lynchburg, with seven substantial historic districts and low cost of living, is the perfect incubator for this phenomenon, and home renovation projects continue to pop up all over the city.

Many locals have turned this trend into a dedicated pursuit, such as Victoria Bartholomew, a real estate agent who rehabilitates rundown properties in Downtown Lynchburg’s historic neighborhoods along with her husband Damien and her dad Dan Hague. Together, the three of them comprise Rise Up Properties, which renovates historic homes and downtown spaces. 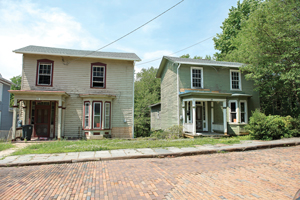 Before the “After” Photos

Victoria, like many young professionals, wears a lot of hats; Damien does as well being the owner and operator of Rise Up Climbing on Church Street. And while they enjoy the renovation process, it’s labor intensive and decidedly unglamorous. [Case in point: Damien’s job was to mow the lawn in the midday heat while this interview and photos were taking place.] 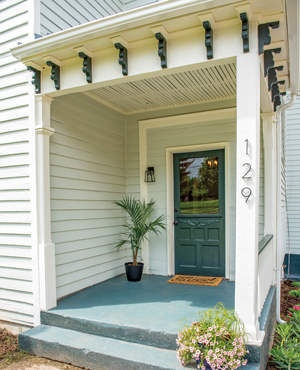 Victoria herself is no stranger to the nitty-gritty work that goes on behind the scenes. She recalls using her “16-year-old twiggy arms” to help her dad run wire for his historic home years ago on Washington Street.

Flash forward to fall of 2017, and Victoria and her dad are still working on properties together with Damien joining in about eight years ago. Together, they purchased five properties in Daniel’s Hill, the district that boasts views of the James River with Point of Honor at its southern border. Four homes are on Cabell Street with one on F Street. The plan is to “renovate and resell” them, a distinction Bartholomew makes because “they aren’t ‘flips’ with new paint and flooring.” Instead, they “take it all down to the studs.”

A few days before the initial Open House for 129 Cabell Street, the first home of five to be renovated, Victoria is giving us a tour in mid-May.

“This house was very dark because that window was the only window in the dining room,” she says, pointing. “So there was a wall here, there was a wall here—this was a cave in here. So, it was like… Okay! That’s not going to work. And then all the ceilings were dropped, so we had to pull all that stuff down…”

Victoria speaks quietly but quickly, describing all of the changes with sweeping and dismissive gestures. “Obviously,” she concludes, “we gutted everything.”

And that’s not an exaggeration. What sounds daunting to most is par for the course here, and it’s exactly what they love to do. Victoria, Damien, and Hague do the majority of the work on their numerous projects—“You can catch us down here on Cabell Street almost any morning of the week working away,” she says. Collectively, they determined what needed to be done and how they wanted to do it; when certain elements demanded a highly specialized skill, they hired out as needed.

“I am the design leader on the project,” Victoria says. “My dad focuses on the construction plan for the project, and Damien is the one that keeps us in check and also ends up doing a lot of the physical labor (I call him the Light Fixture King). We do all the work on the house and act as general contractor on our own projects.”

Perhaps the most critical decision with 129 Cabell revolved around the existing layout and improving the flow from the living room to the kitchen and dining rooms. This was where Victoria’s “wall here, wall there,” description was given, and seeing the openness and light-filled rooms today makes it hard to imagine the original “cave” she describes.

Yet, Victoria thrives in that in-between of the “Before” and “After,” knowing it’s atypical: “People have a hard time visualizing it,” she says, adding that if they show an unfinished project to prospective buyers, they’re unlikely to come back. That’s okay, because to Victoria “half the fun is picking the finishes and fixtures; I enjoy it.”

After removing some walls, improving the flow and reconfiguring the kitchen, they also had to tackle some major “functional elements” such as all new wiring, plumbing, HVAC and insulation.

“We have to save the historic character but also update it to a standard we would all want to live in today,” Victoria explains.

Renovating essentially boils down to finding a way to merge these modern amenities with the character and unique elements of a home’s original style. In 129 Cabell, the real character exudes from the exposed chimney that runs through the center of the home, providing a stunning focal point while also delineating the front living room from the dining area.

“We are big fans of new wiring, adding air conditioning, insulating walls, but you better believe I love old windows, original wood floors and any type of wood work,” says Victoria. “We will go to really great lengths to save those.”

Other unique elements they preserved include the original claw foot tub in an upstairs bathroom, the fireplace mantel, the detailed scrolling and paneling woodwork on the staircase, which they painted, and the original windows, which they cleaned up.

As a real estate agent, Victoria knows today’s buyers and the amenities they prioritize. So, 129 Cabell Street was updated to include an en suite with a tiled, walk-in shower, a true rarity in historic homes. Victoria also worked in open shelving and exposed brick for the kitchen to stay on trend. And one of her favorite elements is choosing the distinctive light fixtures—especially ones that will make a strong statement.

A Love for Historic Homes

So, considering the intense labor involved, why historic homes in Lynchburg? For one, Victoria has lived here since she was eight years old, saying, “My family is here because of old houses. I believe the ‘youngest’ house I’ve ever lived in was [from]1921, and so it’s a family thing—it’s in my blood.” She studied Architecture and Urban Planning at Virginia Tech, an experience that “provided extremely useful lessons in community development and working within existing constraints to plan for the future.” Upon graduating, Victoria saw more historic homes per capita in Lynchburg than in most other cities; with so much selection in style, size, and age, she saw an opportunity.

“With historic homes, there is no one exactly alike,” she says. “Walking into every historic home I’ve ever been into really keeps me hooked; there are so many possibilities and often so much potential.”

In recent years, she has become increasingly devoted to the downtown sector, volunteering with various organizations and focusing on renovating several homes. Now, she says, “We are certainly seeing an increased draw to those areas. People want to walk downtown, live in diverse communities, not live in a ‘cookie cutter house,’… and be surrounded by beauty—the historic districts offer all of this currently at a lower price than many other parts of the city.”

She says renovating historic homes is “genuinely a passion project,” adding, “I had many clients looking for this type of house, which is why we decided to renovate and resell, because we knew there were buyers and had nothing to show them. What a great thing to be able to renovate a vacant long-dilapidated house and turn it back into a contributing structure!”

For now, they’re certainly doing their part—129 Cabell is officially on the market, and Rise Up Properties is already fast at work on 117 and 119 Cabell, the next two homes in queue.

So You Want a Fixer-Upper?

Pros:
• Initial purchase costs will be lower on a home that needs work done
• You control final colors, fixtures, and changes to meet your preference

Cons:
• Most projects will take a large amount of time and cash (versus a turnkey property purchased with a conventional loan)
• Historic homes require city approval of exterior changes
• Unforeseen problems typically arise that may stall progress
• Managing the timetable can be tricky (electrical before drywall, etc.)

Victoria’s Caution:
“It takes a lot of work and money, and you have to love it.”