The Academy’s Youth Programs Flourish with Reopening of Historic Theatre 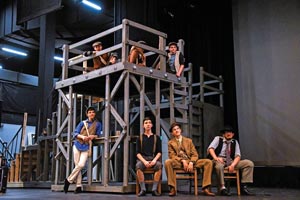 Last December’s reopening of the Historic Academy of Music Theatre was met with great excitement throughout the Lynchburg and surrounding communities, but perhaps the most enthusiastic reception came—and continues to come—from the young members of the Academy’s Youth Theatre program.

“I always love when we have new students in our programs seeing the Historic Theatre for the first time,” says Kelly Posenauer, director of education at the Academy Center of the Arts. “We hear things like, ‘I get to sing here?’ I think they all know how lucky they are to perform in this incredible space and in turn give their hearts to the production.”

Anyone who caught the Youth Theatre’s recent production of Newsies has seen this passion and dedication firsthand. The cast was made up of 42 high school students from Lynchburg and the surrounding counties. About 1,500 people came out to see the performance over the course of three shows. Posenauer says it’s one of the most special productions she has been involved in. “The energy in the theatre was palpable,” she says. “Those students worked so hard and really brought the audience into their story.”

Newsies is one of five productions the Academy’s Youth Theatre program showcased this summer. The Lion King, Jr.; Madagascar: A Musical Adventure, Jr.; A Wrinkle in Time; and The Jungle Book completed the lineup.

Summer productions are preceded by two-week camps. Although auditions are held for certain parts during these camps, all children enrolled in the camp get to play a role in that given production. 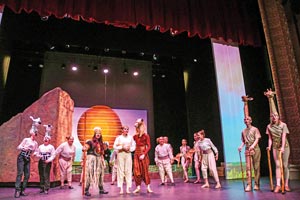 According to Posenauer, planning for summer productions starts about nine months before the camps begin. “The directors of the respective camps and I start discussing potential show ideas and make lists of shows that get us excited,” she says. “I take that short list to the Academy’s programming team and we discuss things like show themes, educational opportunities, and diversity to make sure that we stay as inclusive to our community as possible.”

They also offer non–performance based programming. For instance, the Academy offers a “Broadway Bound” camp where Broadway performers share their knowledge with aspiring performers while teaching them real world applications. “While the camp doesn’t end in a ticketed production, students can walk away with the knowledge they need to have a successful audition and different acting techniques they didn’t previously know,” Posenauer says.

Posenauer believes that, regardless of the type of program a child participates in, theatre serves as both a safe haven and as a site of important development for young people. “The theatre is a magical and safe space for children to grow, to explore, and to thrive,” she says. “Theatre programs are generally comprised of some of the most accepting individuals who value each child for who they are but also encourage them to be so much more. Over the years I have seen some of the most timid children come out of their shells when they were on our stage. In theatre, students can learn core values like inclusion, patience, and selflessness.”

Delia Loy, a Youth Theatre student who appeared in Newsies, agrees—saying she walked away from her experience feeling changed. “I have found more confidence in art, theatre, singing, and dancing with the Academy, more than at my own school or anywhere else,” she says. 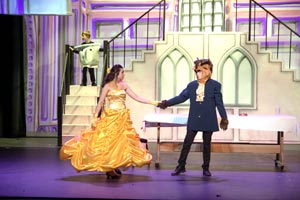 In addition to enriching the lives of individual children, theatre programs for young people also benefit the community at large. The director of Beauty and the Beast, Jr., encouraged students to donate books to the Free Libraries around town. “They learned how to give back to our community in a small way that created a big impact,” says Posenauer. “One thing I love about the Youth Theatre programs is how they connect our community. We have students from Lynchburg and the surrounding counties who come together and form friendships that last throughout the years. They support each other in their respective schools, thus creating community year round.”

In turn, the community gives back to the Academy in the form of scholarships that help children in need gain access to the Youth Theatre program. About 30 percent of students are on scholarships of some form, thanks to donors. The Academy also offers payment plans.

In the future, Posenauer hopes to see the Youth Theatre program continue to expand and evolve, and she believes that the recent restoration of the Historic Academy Theatre has already begun to facilitate positive growth. “The education department now has more space to expand,” she notes. “This summer we added a straight play [A Wrinkle in Time] to our lineup, expanding beyond just musical theatre. I would love to offer more programs like this when we have openings in our schedule.”

Regardless of the specific shape the future takes for the Academy’s Youth Theatre program, the ultimate goal is to make sure young performers leave their experience changed for the better—whether through learning new skills, making new friends or unearthing new confidence.

“My first experience with theatre was not with the Academy and while I enjoyed it, I definitely felt like I could have walked away,” says Elise Jones, Youth Theatre student and Lion King, Jr., cast member. “But now I’ve made a real family here and I feel so at home. I can’t imagine my life without it.”