Shoes With A Mission

Even after running through the Congolese jungle barefoot, Liberty alumnus Emmanuel Ntibonera says he still spends most of his days not wearing shoes.

“I think part of me is sick of shoes after seeing them piled up in my home for so long,” he laughed. “Every inch has boxes of shoes. It got to be too much. I don’t even want to wear them anymore.”

Ntibonera has spent the last several years collecting more than 70,000 pairs of shoes for the people of Congo, a mission he details in his book Congo Sole, which came out in October. The book tells the story of Ntibonera and his family as they escaped war-torn Congo and came to the United States.

“The biggest takeaway I want people to get from the book is that there is hope,” Ntibonera said.

“Though we may fall, you can get back up. There is nothing you can’t overcome. I look back at everything that I’ve been through, and see? I’m still standing because I have hope in the Lord.”

Humbled Beginnings
Born in Congo as the oldest of nine siblings, Ntibonera said he and his family had a fairly normal life before the war.

The Ntiboneras lived in a seven-bedroom house, which was part of a larger compound his dad owned and rented out. While they lacked American comforts such as running water or taking the bus to school, the Ntiboneras were surrounded by a loving community where everyone looked out for each other.

But that all changed in 1996 when Africa launched into war as Rwanda invaded what is now the modern-day Republic of Congo, which led to violence and genocide across the country.

At the time Ntibonera was eight years old.

“War broke out as me and my family sat down for dinner,” Ntibonera explained during his Liberty University Convocation appearance last November where he shared his testimony. “Chaos, people running. You could hear gunshots in every direction and every corner of the country.”

In that moment, Ntibonera said he and his family prayed for peace as they sat in the darkness. Over the radio, they learned that rebel forces had taken over their city.

As a large family, the Ntiboneras began to make a plan to leave the city alongside their extended family knowing that there was danger ahead as they trekked throughout the jungle. Ntibonera said his family kept saying, “Keep moving forward.”

“As my bare feet carried me, one step at a time, my eyes and ears absorbed horrors I’ll never forget,” Ntibonera describes in his book. “Limp bodies, painted with dry blood, were laid out on the side of the road. Women’s screams, muffled by rows of vacant houses, turned my stomach, even though I was too young to fully understand what was happening.”

Suddenly, his family members were refugees in their own country, but Ntibonera said his father vowed that they would not die in Congo. Eventually, the family fled to Kenya. There they filled a tiny apartment and waited for a door to open so they could come to the U.S. In 2009, it did, and the family found themselves settling in Greensboro, N.C. 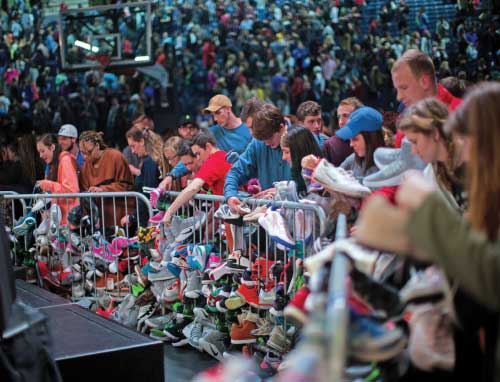 “We suddenly had to adapt to a new place and culture,” Ntibonera explained. “The Lutheran Church helped us get to America and they were able to set us up with a social worker for the first six months of our time in Greensboro, but then we were on our own.”

As Ntibonera became more settled in America, he decided he wanted to pursue an education and found himself applying to Liberty University—only an hour and a half up the road from their new home.
“It was hard being away from my family,” Ntibonera said. “We had this bond. We had been through so much together and we had been together my whole life.”

But Ntibonera said God was preparing a place for him at Liberty, and he didn’t know it at the time, but it involved 20,000 pairs of shoes.

Finding sole in tragedy
Ntibonera said he soaked up life as a student at Liberty, where he heard from speakers from all over the world during their twice weekly Convocation.

But the person who stood out from the stage the most was Senior Vice President for Spiritual Development David Nasser. Like Ntibonera, Nasser himself was a refugee after fleeing Iran as a child.

“Here was a man who was a refugee who was speaking to thousands of people,” Ntibonera said. “It made me feel like he could do anything.”

As Ntibonera sat in Convocation each week, he also heard about humanitarian trips Liberty students would take to serve people all over the world.

“I remember they were talking about students going to Rwanda and I thought, ‘Why can’t they go to Congo too? It’s right there’,” he said. “I told my siblings that someday, someone was going to talk about the Congo from that stage.”

At the same time, Ntibonera said God was stirring something in his heart that it was time to remember where he came from and give back to his people who were still hurting halfway across the world. As he went through his closet, it came to him: shoes.

“I remember thinking, ‘Why do I have so many pairs of shoes?’,” he said. “At one time, I didn’t have any and I was praying out to God for a pair.”

Ntibonera said that many children in his country did not have shoes growing up, which put them at risk for disease, sometimes even fatal ones. Sending shoes to Congo could potentially save lives, he thought.

Ntibonera began collecting shoes on his own, filling any space he could with shoes. But soon he was overwhelmed and realized that if he was going to accomplish his goal, he needed help. He decided
to turn to Nasser to see if there was anything Liberty could do.

He emailed Nasser for a meeting and within a few hours of talking, Nasser set a plan in motion: they would host a campus-wide shoe drive with the help of NBA player Steph Curry and his wife, Ayesha, during Convocation.

Liberty’s Vice President of Spiritual Development Josh Rutledge said after their initial meeting with Emmanuel, it wasn’t his story that stuck out. 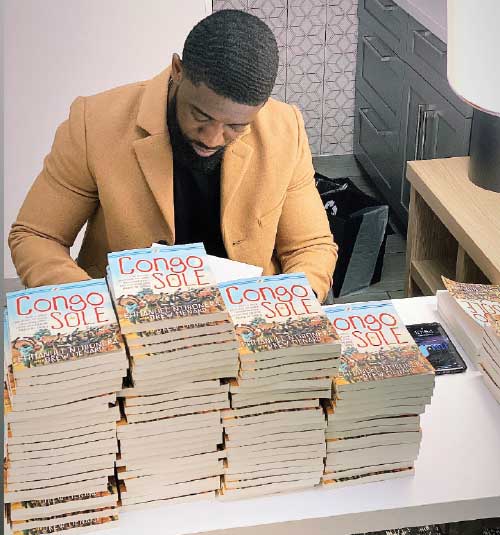 “A lot of young people, especially students, have remarkable stories,” he said. “But Emmanuel’s story was tied in with a dream and a personal plan of action, and not only that, it was a plan he was pursuing regardless of whether anyone else got on board with it or not. That’s always going to stand out. When someone says, ‘Look, here’s what I feel called to do, and here’s the steps I’ve taken to make it a reality. Would you like to join?’ That’s Emmanuel. He’s not out looking for permission to do something. He’s out extending invitations to join him in something he’s already doing.”

Then in March 2017, Ntibonera’s declaration came true. During the Curry’s March 2017 Convocation visit, Nasser invited Ntibonera to share his story from the Convocation stage.

“I remember before Convocation sitting in the green room with Steph wondering how I got here,” Ntibonera said. “Part of me just wanted to sit back and take it all in from the audience and just see what God was doing.”

More than 20,000 shoes were donated by not only the Currys and sponsors such as Nike and Under Armour, but by the Liberty student body.

“I think our students are often the ones leading the way at LU when it comes to service and ministry,” Rutledge said. “We’re always much more interested in joining with what they’re already doing than trying to invent something new. Emmanuel’s mission had a very practical call to action. ‘Do you have a nice pair of tennis shoes lying around that you’d be willing to donate?’ That was it.”

Since then, Ntibonera said that he has raised more than 70,000 shoes for the people in the Congo and has traveled to the country to deliver them more than three times.

“There is still so much work that needs to be done there,” he said, noting that sales from his book, Congo Sole, will go toward building a community center in the country where individuals can seek medical care, counseling, and start businesses.

“My people have been through so much,” he said. “There is so much trauma and hurt. A pair of shoes is a start but can only last so long. I want to be able to support them long-term.”

Ntibonera, who now lives in Nashville, said Lynchburg played a huge part in his story and helping him grow into the person he is now.

“Lynchburg was my temporary home, but in a way, it will always be home,” he said. “Liberty impacted my life in so many ways. It was incredible to see students and people from the community come behind me and say, ‘Yes, we want to help’.”